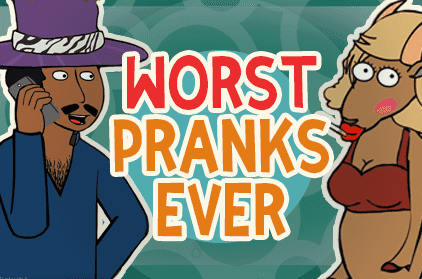 Check Out the Worst Pranks Ever Done

Have you ever watched a prank video and thought to yourself, "What the hell is wrong with them?" And not in a good way? Maybe it made you feel bad, disgusted, or empty - things you aren't supposed to be feeling after a hilarious prank. Well, we've gathered up some of the worst pranks and prank calls ever seen to show you what not to do.

The Bad And The Ugly

What makes a prank bad? It might be tough to figure out what kind of prank might put the safety of others in jeopardy. But you don't want to hurt a friend to do something humorous and clever. Well, a prank can be considered bad in two ways. The first is if it doesn't go the way you want it to go. For examples of that, you can check out: Ownage Pranks Hall of Infamy: 5 Pranks Gone Horribly Wrong! There, you'll find a collection of pranks that might have thrown the prankster off. These pranks could still be funny in their own way, but it is always at your own expense.

You can't always control pranks. Sometimes even the most well-intentioned ones can go wrong. We've all been there. As long as you don't let it go out of hand and learn from your mistakes, you can turn the worst pranks into hilarious ones.

The majority of the conversation videos that graced the headlines have been taken down from their Youtube channels. After all, the platform tries to stick to family-friendly content. The truly horrible are mostly found in other video websites. But if you're looking for the horrible pranks on Youtube, here are some of the worst ones we can find:

This first one is from right here in Ownage. This dad was feeling down after his pawnshop got broken into and a mini bike was stolen. So his son decided to set up a prank call for him. It didn't go down so well with the wound still fresh and an investigation ongoing.

Pretending to be the father of someone who had (but refused to give) the stolen minibike just made him unbelievably mad. Apparently, the cops investigating the incident were getting in touch with him while we were doing the prank. It got a little messy.

This is the perfect example of how even the most experienced prankster can't fully control the course of the prank and prank call. Better luck next time!

A Hair Out Of Place

Any lady out there might tell you to never mess with her hair. Men aren't so different. People tend to have a preferred style and an idea of what to expect when getting their haircut.

Hair takes a while to grow too, so undoing an extreme change could take months or even years. This might be problematic for people who need a particular haircut for their job, so messing with someone's hair without their consent is generally a no-no.

Here, TopNotch Idiots pretends to be a barber and messes up the haircuts of two clients. He goes to flirt with one of them too. Naturally, neither of them were all that amused. It doesn't really seem like anyone was having fun here. For something that's supposed to be a prank, there was surprisingly not a lot of laughter.

Roman Atwood has this infamous prank on his channel of throwing his kid off the second-floor balcony to prank his wife. He had his kid and a dummy both wear Spider-man costumes complete with masks.

He distracted his wife so she wouldn't notice the switcheroo, then flung the dummy over the railing. His kids seemed really enthusiastic about helping with the prank, but his wife did not take it too well. Maybe bringing to life a mother's worst nightmare isn't so funny to everyone after all.

Now we're heading to the more… legally questionable territory. Twin brothers Alan and Alex Stokes took a prank a little too far when they decided to dress up as bank robbers and run away from a bank carrying a suspicious black bag.

Bystanders were definitely confused and alarmed, and one of them alerted the police. They were caught and reprimanded by the cops. What else did those twins expect when coming up with this prank?

Busting Down The Door

Swatting is a very horrible, very illegal form of a prank call that you should never do. This video really tells you why. A video game streamer playing Counter-Strike had his live stream cut short after cops rushed through his door and told him to get on the ground. He was handcuffed and could have easily been badly injured.

Someone thought it would be funny to call the authorities and report suspicious activity in this gamer's house as a prank. There is nothing cool or funny about this, and you definitely shouldn't ever try this out.

So, let's have a recap of what not to do:

First and foremost, never ever do anything illegal. Some people seem to think that making a Youtube video and saying, "Chill, it's just a prank" lets them get away with anything. Yeah… no, it does not.

Remember that you have to face the consequences of your actions. Even if you're only faking committing a crime, those around you won't be able to see that it's fake. Someone will get hurt. Someone will likely get the authorities involved, and you really want to avoid that as much as possible.

That said, it's a given that you should avoid prank calling the cops and other emergency services. Do not ever prank call 911. No matter how out-of-this-world you try to make your prank, they will take you seriously. You will waste their time and resources that other people (those who actually need help) need. Plus, your actions might not seem so funny from behind a jail cell.

Try to pick up on how the person you're pranking is feeling. You have to stay in character, but if things seem a little unstable, send them a small sign that it's all good. Drop some clues so they would be able to pick up on the fact that they're being pranked. This could help them ease up, at least a little bit. Better to prevent any big outbursts or extreme reactions early, so you don't regret it later.

What's the point of a prank if nobody can laugh at it? If it's only going to be funny for one person, maybe rethink the prank you're trying to do. You might not be trying to pull a prank after all.

If you're making a prank video, try not to get too caught up in the number of views and focus on why you want to do a prank in the first place. Try to make sure that the people you're pranking would be able to laugh about the whole thing, too, even as a fond memory in the future.

If you want to guarantee a funny prank, you can try to download Ownage Pranks' prank call app. People of all ages use it to prank people all the time. You can even request a prank call and have them trick one of the guys.

Think Outside The Box

The gold standard for pranks is that the prankee should love it or at the very least find it amusing at the conclusion of it.

This usually eliminates the majority of cruel pranks that hurt the victim or put them in serious danger. No matter how much you don't want to drop the person, dangling them by their ankles or feet from a cliff is most likely bullying, not pranking.

If you've been pulling pranks for a while, it can be difficult to stay fresh. Maybe you've already pranked every member of your family and all of your friends. Maybe you've exhausted your list of prank ideas and have already turned them all into videos. If the people you're pranking quickly catch on, that could make your prank fail.

The good thing about pranking different people is that it's never exactly the same. Everyone can have a different reaction. So you can branch out to more people to help give you inspiration. This could give your old bits a little more polish. You might be able to add a new spin on things or get a fresh take.

If all else fails, don't get too discouraged if your prank doesn't work. Sometimes it can even be funnier if it doesn't end up the way you wanted it to.

If you have some pranks and prank calls gone wrong, send them to us! Share your videos on social media and tag our channels. Let's use this as a learning experience and up our game!