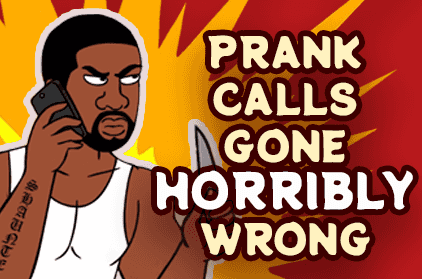 We always celebrate the prank calls that go well, but we rarely pay attention to those that don’t. Obviously, it’s because bad prank calls are a cringe-fest. Listening to a prankster bomb a prank call is like reliving the time you told a waiter, “yeah, you too,” when they told you to enjoy your meal. Every second is painful.

But there is still something to gain from all of this - a silver lining if you will. You could treat these bad prank calls like a blooper reel. It isn’t as funny as the real thing, but it’s funny nonetheless.

Or you could use it as a learning experience - a what-NOT-to-do guide for prank calling. While there are many prank-calling guides on the internet (ours included), people still skip cardinal steps.

Pranksters would never put instructions unless it’s absolutely necessary. When we say mask your phone number - we mean it! Maybe these horror stories are just what the doctor ordered.

Welcome To Our Hall Of Infamy

You’ve seen Ownage Pranks’ prank call Hall of Fame, where the famous pranks lie; now it’s time to meet its ugly cousin - the Hall of Infamy. These are the prank calls that are entertaining for all the wrong reasons. Sometimes it’s the prank caller’s mistake. It could be a bad joke, a poor response, or an unmasked number. But there are also times where there is no other choice but to bomb. The world is a crazy place, and if you’re lucky, you might just find a crazier target.

So if you want more polished prank calls- head over to our Hall of Fame. But if you want to see a prank call gone horribly wrong -read on!

The first horrible pranks in the queue would be a couple of in-house prank calls. Even as experienced as we are, we don’t have complete control over the situation. One wrong move, and we’re back at square one, making rookie mistakes.

Brushes with the law come with the territory. Not everyone has a sense of humor, so you better expect them to call the men in blue when things go out of hand. The key is to make the prank call without giving them any reason to charge you, or else, prepare yourself for some prison time!

This prank call is one of the outliers. We clearly went by the book, but the target was paranoid. They called the cops ASAP. When we tried to continue the prank call, we got

This prank call started well enough. Buk Lau was doing his thing, and it was only a matter of time before they lost it. But then they turned the tables when he started cawing? It’s definitely an unorthodox response - so strange that we broke out of character.

Now, this isn’t the worst prank call ever. Some might even call it entertaining! But it didn’t go according to plan. And he got us to slip! This is a prank call gone wrong, for sure.

If there is one thing you should learn from this, it’s to be prepared for everything. Not everyone is going to treat a prank call like a regular conversation. Get ready to receive some creative comebacks.

While Ownage Pranks has its fair share of wild prank calls, we don’t hold a monopoly over prank calls gone wrong. We’ve checked the forums to see if other pranksters struggled with it as well. And we have a couple of stranglers for you!

Anon shares her experience with prank calling as a young teen. Her idea is simple enough. She takes on a character looking for her boyfriend. She has a voice she wants to use, and she’s ready! She makes her call, and the prank victim is a little too cooperative. If you check out our blog, “What to Say to Prank Callers” - this is a diversion technique.

Eventually, the voice acting disappears, and she veers away from the script. The target takes control of the conversation, and you have a 40-year-old who is a little too interested in our prank caller. A couple of calls later, and you have an angry father driving off to someone’s house with a bat.

OP was banned from prank calling after this, and that is what truly makes this a prank call gone horribly wrong. What a horrifying prank call!

U/DankMemos talks about a couple of people back in high school who like to prank call during parties. But unlike your usual jokes, they give out threats. They don’t actually do anything, but they give a clear visual. One of them called a teacher and brought up bodily harm to his daughter. *Facepalm* The teacher knew who they were and got the cops involved. Shall we call this a brave yet dumb prank?

That is one way to kill the party buzz.

Anon and his cousin have been prank calling one lady for weeks. An ongoing activity that their friend group has been doing. For the most part, things are good. They masked their number and everything. But things quickly go sour when the cousin forgot to mask their number.

If that isn’t enough, here is our top pick for the web:

A local radio station (WSNX) is giving out free Kanye West tickets to a caller, but only if she tells her husband that their child is not his. She gives him a call, and he freaks out.

The goal is for him to say that he still loves her, but we get a different kind of confession - a sleeping-with-your-sister-for-the-past-year kind. All it took to expose that was a bad prank call and a couple of Kanye West tickets.

Hope you enjoyed this selection of crazy yet scary prank calls. There are bound to be more out there.

Want to skip all the bad prank ideas? Try Ownage Pranks’ prank call app. We have several pre-recorded scripts you can send to family and friends. No need to worry about messing up your delivery! You can also request a prank call for a more personal touch. When it comes to prank calls, Ownage is your best bet!