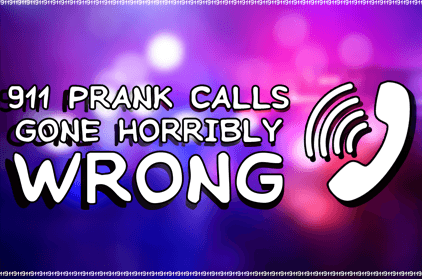 According to the National Emergency Number Association, a total of more than 660,000 911 calls are made each day. Unfortunately, not all of these calls are made with good intentions. It is estimated that about 1 in every 12 calls is a prank call or some other kind of unnecessary call. Prank callers can be young children who don't understand the consequences, bored teens looking for a laugh, or even people with mental illnesses who may not know any better. In recent years, there have been many cases where pranksters have gone uncharged due to insufficient evidence and many more where pranksters have been charged and even jailed after the death of someone on the other end of their phone line.

In a world where people are constantly checking social media or their phone, it's becoming more and more common for people to report emergencies as a prank. It can be tempting to do, but the consequences could be deadly. In here, we'll explore the dangers of prank calling 911 and what might happen if you make a pranking call.

A prank call to 911 is not just a harmless joke. Prank calls are punishable by law and can be dangerous. If you or someone you know has been having thoughts of making a prank call, here are some reasons why this choice may not be so funny. Better yet, just use our spoof calling app so you can have the same amount of fun - minus the trouble!

Why prank calling 911 is illegal

Picture this: yesterday afternoon, Kyle and Jeff were playing a prank on their dad by calling 911. They pretended to be in a car accident and talked to the operator for a few minutes. When the operator asked where they were, they said “we don’t have an address, we just need help please”. They then hung up the phone and laughed about what had just happened.

Later that day, Kyle and Jeff got a call from a police officer who told them that their dad had been in an accident and had been taken to the hospital. The officer told them that they found out about it because Kyle and Jeff called 911 earlier that day. Now they are scared because their dad is going to be so mad at them! YOU WOULDN’T WANT THAT TO HAPPEN TO YOU, WOULD YOU?

Emergency services are for emergencies. This means they are intended for people who are in distress, experiencing some form of physical or emotional trauma, or in need of assistance with a life-threatening situation.

It's important to know that prank calling 911 is illegal because it can have serious consequences. If the police believe you have done this, they may try to find out your identity and address. This could be scary if you're trying to stay anonymous, especially if you live in a city with high crime. And if you live in an area where there's a lot of gang activity, then prank callers might have to worry about being targeted by these groups.

911 Prank Calls Gone Wrong: WHAT YOU SHOULD KNOW!

The law for prank calling 911 varies by state. It is typically not against the law to call 911 as long as it is an emergency. However, if you are playing a prank on the operator, saying that there's an emergency when there isn't one, or making harassing phone calls to 911 operators, then you can be prosecuted. While making a prank call to 911 may seem like a harmless joke at first glance, this type of behavior can be punishable by law.

In the US, it's illegal to prank call 911. Penalties may vary from a misdemeanor to a felony. In some cases, prank callers have been charged with obstruction of justice, for wasting the time of public employees who are on duty, and for causing a false alarm. Some jurisdictions also require prank callers to reimburse the police for any costs incurred. There are many reasons why someone might call 911 as a joke, including boredom on a weekday night or being drunk. Yet some people have been charged with more serious crimes after making a joke that turns into something more serious.

911 Prank Calls That Have Gone WRONG

Here are some of the 911 prank calls that have gone wrong so you can avoid the same mistakes in case you try to do a prank call in the future:

On Tuesday, 18-year-old Ryan Grasley of Baltimore called 911 to tell the police about a shooting in his neighborhood. However, after becoming increasingly frustrated with the dispatcher who insisted he stay on the line, he hung up. Police soon arrived at his house, where they arrested him for making a false call.

This is an example of how not to prank call 911. Other ways are making sexual comments or threats, blocking the phone line so no one else can call for help, and using racial slurs while speaking to an operator.

If you intend to prank call 911, don't do anything that would obstruct someone else's ability to get through on this number in case of an emergency.

There’s a new internet trend: calling 911 and hanging up. The idea is to create a nuisance and waste the time of emergency operators in an attempt to reduce response times for actual emergencies. However, this trend has been met with some serious backlash from law enforcement agencies.

In reality, these prank calls are not harmless—they take up the time of officials who could be responding to genuine emergencies. In fact, there have been cases where prank callers have made false reports about shootings or other violent crimes taking place, which may result in innocent people being killed or injured.

"I was looking for a way to get out of my house and prank call 911 sounded like the perfect solution."

This is the opening line from an article about a 23-year-old woman who called 911 and pretended she was in labor. The joke didn't go as planned, and the poor woman ended up with a $150,000 bill.

If you're thinking about making a prank call to 911, you should be aware that it's illegal, and can cost you more than just embarrassment.

911 Prank Call Gone OVER THE TOP

In one of the most horrific 911 prank calls in history, a man from Chicago called posing as a victim being held hostage by his girlfriend. He had been drinking alcohol and wanted to see what would happen if he made a prank call. The police responded quickly and arrived at the scene.

When they knocked on the door they heard a woman screaming for help inside. When she didn't answer their knocks they kicked in her door and found her lying naked on the floor, but no man was present. Police searched for hours but were unable to find any sign of him or his car. They finally concluded that it was all just a bizarre prank where the woman had played along with him. SERIOUSLY!?

And that was it for Ownage Pranks’ Prank Dos and Don’ts: 911 Prank Call Gone Horribly Wrong! We hope you can try to avoid doing the same mistakes so you can have a safe and fun time the next time you go prank calling.

Have a fun and safe prank call session!

Read More: What Happens If You Prank Call 911?