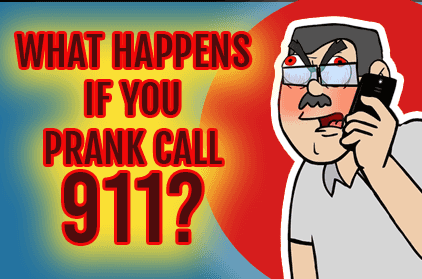 What Happens If You Prank Call 911? - A Cautionary Tale

So you’re at home, bored out of your mind. There is nothing fun or interesting to do. TV is a bust. The internet is down. And you are stuck in the house. It’s a staple do-nothing day that has been stumping kids and teenagers alike for years.

Then you remember the time when you tried to prank call a bunch of local businesses with friends. It was hilarious! Since you have the time and a phone, you decide to prank call. But you don’t know who to call or where to start.

Friends and family will probably recognize you. Local businesses scare you. And you don’t know if you are ready to call random phone numbers just yet. So you make the mistake tons of American kids, teens, and even adults do - you call 911.

STOP. You do not ever prank 911 - call, text, email, or anything. You want to know where the line is? It’s right here.

What Characterizes a Fake 911 Call?

See, prank calling isn’t the issue here. It is the misuse of the 911 call. Any fake emergency report to 911 is either a misdemeanor or a felony - there is no in-between.

So what are the characteristics of a fake 911 call?

According to the Penal Code 148.3, it is “a report to certain government agencies that an emergency exists, knowing that the report is false.”

It sounds like calling the police or emergency services about a health or safety emergency knowing that you are pulling their leg. You could get arrested for a prank call that doesn’t even last 5 minutes. It isn’t worth it.

Why Should You Avoid Prank Calling 911?

There are two reasons why you shouldn’t prank call 911. For one thing, it is illegal. What’s the joke when you prank 911? The most obvious one that comes to mind is faking an injury or emergency. That joke has been made a thousand times before, but the difference is the target. Most of the time, prank callers target loved ones - people they know will get scared and react crazily. That isn’t 911.

When emergency services get a distressing call, they don’t panic. They don’t get scared. This is their job, and they see horrifying things 24/7. When you make a wild story, they will respond.

A ton of manpower that goes into mobilizing a unit. Think about the training that springs into action to ensure care is given ASAP. It’s no joke.

Besides the legal repercussions, think about the moral ones. When you prank call - think about the resources that you are redirecting from an actual emergency to a fake one. Does that sit right with you?

The stakes are high. Law enforcement and emergency services work with small windows. For a missing person’s case, they have essentially 72 hours to find them before they either become impossible to trace or turn-up dead. That’s when you have the luxury of an hour. When people can’t breathe, or people are bleeding out, they have minutes before it reaches the point of no return.

Emergency calls are urgent for a reason. When you call a 911 hotline for a non-emergency, or worse for a joke, think about who you are undercutting. You are making it difficult for dispatchers to address real emergencies, which can come at the price of someone’s life.

What Happens If You Prank Call 911?

Whether the dispatcher realizes it is a prank call or not - the results are the same. You’ll have to deal with local law enforcement. The only difference is whether you manage to get an angry EMS at your house or not.

They Track You Down

Unlike most calls to other people, you cannot mask your caller ID for 911 calls. Why? They need your information ASAP so they can get to you quickly. They have a white pages directory that allows them to find your name and last known address. But usually, they will try to find you based on your directions. If both methods don’t work, they will contact your service provider and coordinate with them.

Regardless of what channels they use, they will always try to find where you are. It is a part of their process. And once they find out it is a prank call, they’ll want to get to the bottom of that as well. Prank calls are bad for 911 services. They will always try to nip that behavior in the bud.

They Will Talk To You - A Lot

They will give you a lecture of a lifetime. It doesn’t matter if the prank call is minor (oh, I’m having a heart attack, sike) or major (there is a bomb in 222 Fake Address). They will treat both calls with the same severity.

They Will Give The Appropriate Punishment

First, you’ll be held liable for any costs incurred during this process like ambulance, fire trucks, property damage - the works. But it doesn’t stop there.

Your punishment can range from a fine up to $1,000 to one year in county jail, depending on your state. If your prank call is considered a felony - you can pay up to $10,000 and 3 years in county jail. There are very few cases where you can get away with it. You would either have to prove that

Outside of these 3 excuses, you have poor chances of getting out of trouble.

There is a big difference between calling 911 as a prank and calling 911 thinking there is an emergency, only to find out it wasn’t the case. Police and emergency services understand how quickly people react to urgent situations. Families and schools teach their children the importance of the number as early as they possibly can. And there are reports of how children managed to save adults by properly responding to the emergency situation.

They will never punish you for an honest mistake. Whether it is a butt dial or a false alarm - you should be fine. However, you have to stay on the line and clarify the situation with the dispatcher.

They need to know that everything was okay. The common mistake most people make when they accidentally call 911 is to put down the phone.

If you are having a dull day, there are plenty of other people you can prank call. People who don’t have life and death hanging in the balance. Try calling family and friends with a voice soundboard. You can send pre-recorded scripts to random friends or family members. You can even try making prank calls to IRS and Indian scammers.

You don’t need to make an emergency call to have fun. There are plenty of other hilarious prank call ideas out there, and Ownage Pranks’ prank call app has a ton of them. If you want to put your own spin on things, you can request a prank call, and our team will get right to work.

There are better ways to prank call. Please avoid disturbing services that are out there to help people in need. Other than that? Happy pranking!