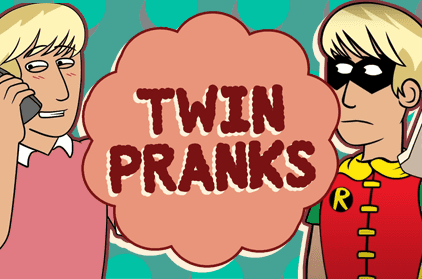 The thought of having an identical twin has probably crossed the minds of most people at some point in their lives. Let your imagination run wild! Famous twins like Dylan and Cole Sprouse, Fred and George Weasley, Tia and Tamera Mowry, and Mary-Kate and Ashley Olsen throughout our childhoods provided us with plenty of inspiration. It's important to keep in mind that the Olsens are fraternal twins and not identical, but that's beside the point).

It's no secret that twins have a special bond. From their earliest memories to the odd glances they get from strangers on the street, they share everything. So when it comes to pulling pranks on other people, they know just how to really get under others' skin. Here are some of the best twin prank ideas that will get your friends' jaws dropping!

Someone raised a question for twins of Reddit, "what's the best prank you and your twin were able to pull off?" And the answers will amuse you!

This is a prank that is currently going on with me and my brother at our work. We are born identical twins, and even compared to other twins, we are really really similar in appearance. My brother and i work for the same company, and he just started recently. He works in a different part of the building as me, and we don't know each others coworkers. If either of our groups are throwing a party, or doing anything, we will often switch when the other is away to either mess with people, sneak off with some food, or have fun. We always deny the existence of the other, and act dumb is someone claims to have seen "the twin". It is so fun to see the look of confusion when you play dumb, and watch them try to ration if they are going crazy of not. Never gets old.

I'm a triplet, but growing up I was significantly larger than my 2 brothers. In middle school, we told anyone new that I had absorbed our quadruplet, Rebecca, in the womb, hence my size. Some people even heard it before meeting me. We got one guy to believe it from 8th to 11th grade. ... then I looked it up and it's actually a thing that happens.

Turns out the three of us were actually the idiots in this case, but it was a good time.

Not my story but someone else's… I work at a funeral home and one of my coworkers did not realize that a woman he had just completed arrangements for was a twin. He had just walked out of the back where her body was waiting, and thought he was alone. A few minutes later her twin unexpectedly walked up, startling him from behind, and he JUMPED OUT OF HIS SKIN. He seriously thought for just a moment that he was either losing his mind or haunted by ghosts.

He apologized profusely, but the twin who had scared him thought it was hilarious (as did the rest of her family when she told them). She said they were always playing tricks on people, & her sister would have loved that they were able to pull off one last twin joke.

1. While conducting a presentation in grad school I walked out a door located on the right side of the class mid sentence, then my brother immediately entered through the door on the left of the class and continued the presentation as if nothing had happened.

I asked my professor if I could do it in advance, and he joyously watched the rest of the students try to comprehend what had just happened as the presentation finished up. I received a high mark on the assignment.

2. I was visiting my brother (Twin A) who was doing grad school in London and he was going to show me (Twin B) around the city between his lectures. I was waiting close to the entrance to one of the building when he came out and hurriedly walked me off campus. Apparently he had an assignment that was due and bumped into his professor while on his way to meet me. When the professor started asking him about the work, he told the professor that he was me (Twin B), but that the professor could find Twin A in the library working on the assignment. After the professor left him to search for... him, he rushed out to meet me. Then we went to Hamleys a multi-story toy store to enjoy the rest of the evening.

I'm an identical twin and get pretty tired of people's amazement at me and my brother. So one trip to the pub a guy stopped us and was saying the usual twin questions at us. I stopped him and in a very nonchalant but serious way say "oh we get this a lot but we're not actually twins but cousins. But our parents are two sets of identical twins, so my dad and uncle are twins and my mum and auntie are twins so that's why we look so similar". The guy thought it was the most amazing thing he ever heard and was running around telling all his friends and they are pissing themselves laughing knowing it obviously isn't true. But it was a fun dodge on the typical twin questions but did open up a complete different line of questioning.

Do You Own Prank

Enough with these twin prank stories; it's about time you pull off your own prank. Not everyone received the gift of having a twin, but that should not stop you from doing a fun prank. You can fool one of your friends into thinking you have a twin by convincing them that you do. Even though it's not an easy prank to pull off, you'll be laughing about it for years if you do it correctly. Prepare your acting skills as you might need a lot of them with this prank. So here goes:

If your "twin" is suspiciously precisely like you, then pulling a prank on them will be a complete waste of time. There is a distinct difference between one and the other when it comes to personalities. The clichés of twins aren't set in stone.

Make a list of all of your twin's characteristics and sit down to write it down. List the items your twin likes and doesn't like, and at least five of your twin's personality traits. Is your identical twin extroverted? Spontaneous? Hilarious? Shy? Awkward in public? The more familiar you become with your fake twin, the easier it will be for you to convince your friend that they exist.

Your twin's style may be influenced by their personality. A more adventurous twin is likely to dress more casually and casually than a more conventional twin. Make sure that the attire you choose for your twin doesn't look too similar to your own particular style.

Step 4: Reason Why They Aren't Always Around

To make your fake twin seem authentic, you need to explain why your twin doesn't attend your school or hang out in the same places where you hang out. A boarding school or a harsh divorce may explain why your twin lives with a different parent. Your pal will be able to see right through you if you don't have a firm explanation.

As a last resort, you can even create a Facebook account for your twin to appear as if you have one. Your twin can have their own social media accounts if you dress like them. An active social media presence would lend credence to the existence of the twin.

It would be best to target a victim you recently met or haven't been friends with for so long. If you've been friends with someone for a long time, it's not going to be easy to convince them that you have a twin unless they're really naive. In order to pull this prank off on your friend, you'll need someone who hasn't been to your house or spent a lot of time with you, or it will be difficult for them to think that you suddenly have a new sibling.

The twin prank will be difficult to pull off on your own. If you want to make a good impression, ask your buddies to remark that you have a twin and even go a step further to prove it. These people could chat about how much fun they had at the water park with your twin over the weekend in front of their friends, communicate with your twin on social media, or even pretend to phone their twin.

Make it plausible without going overboard with the drama. You know you have to get out of there for your twin to arrive, don't you? You may tell them you have a cold or be grounded, but your twin is free to come out and play. You might be able to get away with saying that you won't be able to make it to the movie that night but that your twin might. In a social situation, you might tell a group of people that your twin sister is outside and that you must leave the party to let her in.

After you've departed, it's time to put on your alleged twin's clothes, change your hairstyle, or do whatever else is necessary to make your disguise seem real. If your twin happens to be nearby, your buddies can either play it up and say hi, or they can just act like it doesn't matter. Start chatting with your pal. Use a slightly different tone of voice to disguise the fact that you're pretending to be someone else. Just a reminder that you should not prolong the prank!

Once done with everything, tell them it's a prank! This trick might be hard as you really have to go all out, but then again, your victim's reactions would be so worth it!

Nevertheless, if you want to go through all these and want just a simple yet remarkable prank, you can always do a prank call. Prepare your script before calling your victim, or use a prank call app if you lack the creative ability to write your own. Ownage Pranks includes all of the features you need.