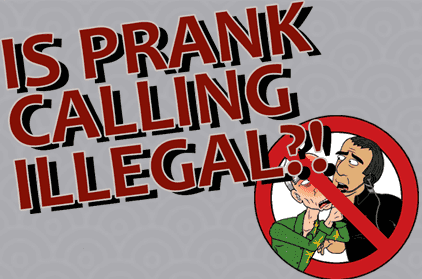 Considering how people like to lawyer-up in the US, it's best to find out whether prank calling is illegal or not. You wouldn't want to be in the middle of a hilarious prank call, only to get the police on the other end of the line (been there, done that!). Even the best of pranksters know where to draw the line because the worst-case scenario is not pretty. Insane fines, community service, and jail time are not worth it.

So, let's get to the million-dollar question: is prank calling illegal?

It's difficult to say! Prank calling is in that weird gray area in the legal system. The rules and the consequences may change depending on the state and circumstances of the call. In summary? It can go either way.

There are times when prank calls are clearly in the wrong. But how are you supposed to know? It usually boils down to the intent of the prank call and the aftermath. If your call has malicious intent and caused harm to your victim? It may be considered illegal. It doesn't matter if the target is your family, friend, or random stranger - they have their rights and can sue when they feel that their rights were compromised.

No, Prank Calling Is Not Illegal

However, a practical joke here and there should be fine. If all prank phone calls were considered illegal, there would be many teenagers in jail for the phone equivalent of ding-dong-ditch. As long as the prank call is harmless and does not have any lasting repercussions, you should be in the clear.

However, be warned that there are people who are very sensitive to prank phone calls. Even with the general no harm, no foul rule, they might still kick up a fuss. In these cases, it is best to know what can and cannot get you in trouble and always gauge the person on the other end of the phone.

Where Do You Draw The Line?

Since prank calls can be considered a crime, you need to need to know the limits. All it takes is one bad joke to push you from a harmless prank to a misdemeanor (or worse - a felony). Admittedly, it is easy to cross that line. Before making your prank calls, always review your outline and script for the following issues:

Disorderly conduct casts a very wide net, so it is best to see the rules in your state. But if we are general, it can be anything that tries to rile anyone up. In prank calls, this means offensive and abusive language.

The best way to prevent this from happening is by checking your script. Jokes and puns are fine, but you have to see them from the other person's perspective. If it feels below the belt, you probably should reserve that bit for victims who can take it.

Harassment and stalking are other easy charges you can have on your record when you make reckless prank calls. Consider the frequency of your call. The obscene amount of calls can be considered abusive and malicious.

Remember that woman who called her ex-boyfriend 65,000 times? The other person claimed she was harassing him. It took a court order to get her to stop. See, the sheer number of phone calls, not even the content of those calls, sealed the deal. While it is unlikely to accidentally reach those numbers, it just goes to show not to take it too far. It is especially risky if you make your prank calls during inconvenient times (late at night, early in the morning, office hours, etc.)

The best way you can avoid this is by limiting the number of calls you have to the same number. After 3-4 prank calls, simply move on to the next victim. You can work through the contacts you have on hand. By doing this, you never call one number excessively.

Targeting someone for their racial identity, ethnicity, religion, gender, or sexual orientation counts as a hate crime, especially if you make it the butt of the joke. Considering the diversity in the US and the rising tensions - pranksters have no excuses. Best believe that BIPOC will take any joke that seems threatening seriously.

Even if you don't intend to harass or harm someone with your prank call, their feelings aren't exactly something you can dictate or control. If you don't share the same culture or identity, it is best to steer clear of extremely charged topics. And that goes without saying - no racial slurs.

So how could you avoid getting in trouble for this? Besides, the obvious: don't be a bigot? Empathy and awareness! Before you call someone, ask yourself why they are the target.

Do you think they will enjoy the prank call?

Do you have the perfect script, one without any slurs?

Do you have a history of exchanging prank calls?

It might seem like unnecessary work, but it doesn't take much. After all, 5 mins of reflecting is better than committing a hate crime and having a weak criminal defense. Because let's face it, what judge and jury will believe you if you say, "I didn't know it was offensive?" You'll need a better attorney is all I'm saying.

When you are making a prank call, it is illegal to contact emergency services like the police, fire and rescue services, emergency medical services, and the coastguard. Their phone lines are operated 24/7 to make sure they can quickly respond to people who need help. You should never waste their time, or else you could be charged with misuse of 911.

Simply avoid calling these hotlines. Hiding your caller ID won't work, and they can trace your calls. And unlike prank calls to local businesses and other individuals, they will press criminal charges on the first offense.

Even when you follow all previous rules down to the letter, you can still get in trouble if you record your prank call. Recording any type of audio is considered without consent is wiretapping - and that breaks several federal and state laws.

Each state handles wiretapping differently. Some require one-party consent, while others require two. If your state requires one-party consent, it's okay to record as long as you are in the conversation. However, if you live in a two-party consent state, you need the other caller to agree to the recording. If you don't meet these requirements, you can get arrested over a stupid prank call.

With 50 states, we can't list down which one is which. So you'll have to look it up. To help you get started, here is the wiretapping law for 19 of the most populous states.

The consequences may vary. So here are the possible things you might face when your prank call gets out of hand:

*These numbers are rough estimates. The punishment may vary according to the state and charges.

With all the penalties laid out, it might seem very scary. Scratch that - it is very scary. But that doesn't mean you can't have your fun. You can! You just have to be aware of the law. Making prank calls should be about having harmless fun. When you stick to the advice listed, you never have to call your attorney for the charges listed here.

If you are scared about making a mistake, Ownage Pranks can make your prank calls for you! Request for a prank call and give us a couple of background details to get started. We guarantee a hilarious call without having anyone arrested. Start (legally) prank calling today!

Read next: How to Track a Prank Call with Ownage Pranks