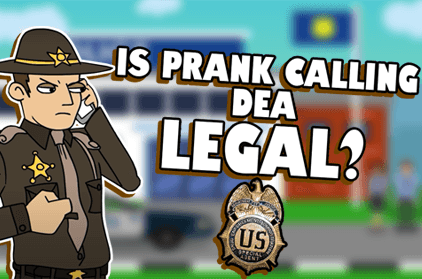 The Drug Enforcement Administration (DEA) is a federal agency responsible for enforcing controlled substances laws. The DEA was created in 1973 by former President Richard Nixon. Its main goal is to reduce drug abuse by regulating drug manufacturing, marketing, transportation, and distribution. It also works to eliminate black market trafficking routes. In addition, the DEA strives to accomplish this by strengthening public health capacities, so people have access to treatments for addiction and information about preventing drug abuse.

Unfortunately, despite its nobleness, DEA has been used in many pranks recently. This year alone, the DEA received hundreds of phone calls from various students and adults claiming to have drugs and need to be tested. Although this might seem like a harmless prank, it wastes time and money on the part of the DEA agents who are forced to take these calls seriously.

Moreover, there are many phone calls that seem legitimate and threaten arrest, prosecution, or imprisonment for supposed violations of federal drug laws. These scams have been known as DEA Hotline Pranksters.  There are also instances where individuals spoof this hotline to ask victims for fine payments via wire transfer or gift card.

Scammers are constantly evolving their tactics, but one thing is sure. They all have a surprising level of sophistication to them, and how they carry out these scams will make you think twice before responding or wiring any money.

DEA reminds the public that the agency will never contact individuals via phone to ask for money and sensitive information on its website. The DEA will only contact individuals if they have a legitimate investigation or legal action against them. The DEA will do this by sending an official letter, which is the best way to get in touch with them about this kind of thing.

The agency also emphasized that impersonating a federal agent is illegal and could result in severe penalties, including imprisonment. In Florida, impersonating federal agents is considered a third-degree felony. Violators can be fined $5,000 or sentenced to 5 years in prison.

Not all pranks are harmless. Some can have serious consequences. Unfortunately, some people don't realize the repercussions of their actions until it is too late. You may think that your prank will be fine, but you never know what could happen down the line. To avoid being caught up in a legal mess or, worse, being sent behind bars, here are other prank call ideas that you can pull off that are fun and will not get you into serious trouble.

Prank calls are often made for laughs, but what if prankers used lyrics of One Direction's songs to make their victims believe they were calling the police? All you need is a spoof calling app to hide your identity, lyrics of One Direction songs, and the number of the person you will be pranking.  Make sure you record this prank call so you can always replay this hilarious moment!

Whatsapp has a new option that will allow you to send messages as if they were coming from another person's phone number. You just need their number and then find their name on Facebook or by searching for them on Google and click "send message" and enter your message along with their phone numbers. Of course, once they receive the text, it'll look like it came from the person who sent the original text instead of you, so there's no way for them to find out the text came from you. There are also other exciting WhatsApp pranks you can pull off. Read more about them here.

A telemarketer prank is when you call a business and pretend to be an interested customer. Then, you would ask them about their product or service to have fun at their expense. However, before pranking a telemarketer, here are some things to consider.

The newest app on the market, "Evil Operator," has gained traction for its controversial nature. This program lets you make two people seem as though they are just chatting with each other when a third person is listening to everything. The third person's role is to record the call and eventually reveal that they have a recording of it, or worse yet - listen in on any conversation you two might be having.

Ownage Pranks’ prank call app is perfect for anyone who loves pranks. It allows you to call someone and change your voice to sound like a different person. You can prank your friends, family members, or even strangers on the street. So if you're up for some fun, then download this app! With this fantastic new technology, you can sound like anything from an old woman to a young boy.