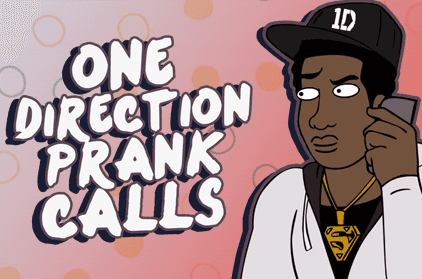 Go Crazy Until You See The Sun With These One Direction Prank Call Ideas!

With the rising popularity of boy groups all across the globe, we cannot deny the fact that out of all of them who’ve existed, there was one who stood out. With countless awards and hundreds of nominations, it’s safe to say that One Direction, also popular as 1D, has become the industry standard when it comes to determining a boyband’s success. With that, we believe that there is no better way to celebrate One Direction’s more than a decade of continuing legacy with something that Ownage Pranks is good at—prank calls! Alright, get ready, pranksters because we have a lot of One Direction prank call ideas in store exclusively for you.

Note: if you aren’t a Directioner, you can skip this intro paragraph and get straight into our list of One Direction prank call ideas below!

One Direction, also known as 1D, is an English-Irish pop boy band formed in London after finishing third in the hit singing competition, The X Factor, back in 2010. Initially composed of five members Niall Horan, Liam Payne, Harry Styles, Louis Tomlinson, and Zayn Malik, they released their debut studio album Up All Night, which was an international success and even became the UK’s fastest-selling album of 2011. As of 2020, the band has sold a whopping 70 million records worldwide, easily making them one of the best-selling boy bands of all time. However, as the saying all good things must come to an end goes, One Direction went on an indefinite hiatus after the release of the music video for their sentimental single, History.

The Prank Call Stars: Where are they now?

When Zayn Malik left the group in 2015, the rest of the members released one more record before they parted to make way for their solo careers.

Alright, now that we’ve gotten to know more about the prank call stars, One Direction, it’s about time that we start pranking - because that’s what we came here for, right? Below is the list of our fun and hilarious one direction prank call ideas:

Use a reliable spoof call app

Save yourself the trouble of buying a new SIM card or buying a burner phone for your prank calls with Ownage Pranks’s own spoof calling app. Since you’ll be needing to hide your identity for most of these One Direction prank call ideas, you can prepare yourself by downloading it right now, whether you’re on iOS or Android.

A spoof app is a quick and easy way to change your number, but without having to buy or borrow another phone. It masks and changes your number, and creates a convincing front for the person on the other end. It is great for strangers and services that notoriously spam your inbox. There is a lot of magic that goes on behind the scenes, but basically - we take your actual info, scramble it and hide it behind a fake number. Think about it as a mask and your phone number is the master of disguise.

If you want to make your One Direction prank idea go off as planned, why don’t you start by downloading our spoof calling app right at this moment!

Member Got You Pregnant Prank Call

Do you know someone - maybe a friend or someone from your family - who’s really head over heels for a specific 1D member? If you know someone who is an avid Louis, Niall, Zayn, Liam, or Harry fan, we have the perfect One Direction prank call idea for you!

Simon Cowell Will Bring Back One Direction Prank Call

This One Direction prank call idea is for the Directioners who are still hung up on the group’s breakup. The idea is simple, you would want your prank victim to believe that you are Simon Cowell, the man behind the boy band’s formation. All you have to do is to use this hilarious script to fool your friends that with just a wire transfer of $1000, you can actually bring the 5 members back for another album!

“Hey, *insert name. This is Simon Cowell, you know, the man behind One Direction. Listen, what if I have a very top secret information for you: I can bring all 5 members back together for another studio album. Here’s the thing, we are actually a thousand dollars short for the mass production of the album. If you could wire me the missing amount, we’ll release the album right away.”

Nothing beats a good ol’ lyric prank call, especially if you’re going to be using one from One Direction. You can pick from their catalog of songs which will depend on the prank scenario. For now, we’re going to start off with something from our favorite prank call list:

You Might Want To Check Out: Pass the Message: Top 5 Lyric Prank Calls

With this nostalgic song, you might spark a conversation about all the old friends who drifted apart over the years.

And you're not here

Forget what I said

It's not what I meant

And I can't take it back, I can't unpack the baggage you left”

That was everything we have for our top One Direction prank call ideas! We’re definitely missing all five of them together and the least we could do, for now, is to honor them by using them as our prank call baits. Happy pranking!

Read Next: Best John Cena Prank Calls the World Has Ever Seen