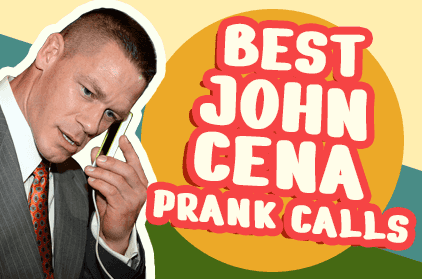 Telemarketers are annoying. Getting one particularly insistent customer service representative can put a chip on your shoulder for the entire day. They’re long, disruptive, and more often than not, manned by an excessively positive person that just won’t quit even after five No’s.

Most telemarketers have an extensive script that tries to convince their leads into buying. If you say no, they will have another trick up their sleeve until they eventually wear you down. For the majority of us, the best thing to do is to hang up. This usually does the trick and you move on with your day.

But what if they continuously call you? Even when you say no, hang up, and block their number? What if the call is accompanied by loud music and ringing your phone every 30 seconds? Imagine a friend of yours constantly harassed by a telemarketer. How funny would their reactions be? Will they turn red, angry, and irritated?

Well, I have the prank just for you. Debuted by the Z Morning Zoo radio show, John Cena prank calls have become a vital part of a prankster’s repertoire. This prank works best if the person you’re pranking is not a fan of wrestling. It gets better when they are particularly averse to wrestling and bans it inside their house.

Do you know someone who is an overprotective mother? Or maybe a traditional, conservative family that views wrestling as the “devil’s TV”? Annoying them with continuous, relentless sales calls about John Cena’s event will definitely ruin their day!

Are all of your friends wrestling fans? Don’t worry. You can get more ideas from our other pranks here.

So Who Is John Cena?

John Cena is a legend. As one of the most accomplished, decorated, and famous professional wrestlers of all time, there’s no doubt in me that your victim will know who he is. His catchphrase “You can’t see me” has become a worldwide meme knowledge. Originally though, it was meant to mean being too quick for his opponents to see his actions.

Before we work on your own John Cena prank call, we need to pay homage to the original version. You need to watch the full uncut version.

Z Morning Zoo is a radio show that regularly does prank calls. This one was a request by a caller named Donny. He asked to prank call his wife Marie who was not a fan of wrestling. I assume she became less of a fan after this prank call.

Donny ordered the pay-per-view WWE Survivor series and Marie flipped because she was going to miss watching Revenge. It became more of a problem when Marie found out that Donny paid for it. Talk about a nag, right?

Donny called Z Morning Z with a brilliant plan of a phone scam to get revenge on his wife. The guy doing the prank was amazing and it was done to perfection.

Marie increasingly grew more irate before turning into a total psycho, screaming at the phone and swearing. I’m not sure if Donny ever got to watch WWE again after that but millions of fans all over the world got entertained. It also spurred a whole new level of pranking.

How To Do Your Own John Cena Prank Call

2. Use A Fake Number

If you’re pranking a family relative or a friend, it’s essential that you use a fake number. The gig is up the moment that they recognize your number. Check out Ownage Pranks’ Fake Number App. From now on, you won’t need a burner phone to prank call your friends!

Download the John Cena theme song and make sure that you play it on loudspeakers. The theme song will overload your victim’s hearing and annoy them further. It will probably give them some WWE PTSD later on. If your prank goes well, you get to watch them flinch and react every time You Can’t See Me plays.

If you’re going to meet them the next day, don’t give yourself away and continue the prank. Make it your ringtone and have someone call you. When they ask, say that you LOVE John Cena and wrestling. Offer a casual invite to watch together sometime and let them figure out it was you who was pranking them the day before.

You can choose to keep the script close to the original John Cena prank call or you can make your own. The best thing about prank calling a family member or a friend is that you can customize it to their scenario.

Say something along the lines of “Hey are you *name*? Well it’s your lucky day! You just won two FREE tickets to John Cena’s event. Just answer these questions to redeem!” If they don’t answer correctly, go. “Oh, that’s too bad. Well, would you like to have them anyway? We’ll give it to you for 50% off!”

After five or six calls, when they’re obviously irate already, give them a call with a different number. Once they start yelling at you thinking it’s the same person, you can play innocent and start with “Hi ma’am, I don’t know what you’re talking about. I’m *fake name*, I’m a representative of UNICEF and I’m calling to ask if you would like to donate to a charity for children with cancer?”

Give fake ID credentials to really drill it in that they just yelled at a charity worker. Once they apologize, lead them on until you can perfectly fit in your John Cena bit. They will surely be frustrated as hell.

This prank would work best with a lively announcer voice. The louder the better. Practice with a friend until you can get the right tone and pitch. You can also use other sound effects to make it sound legit. Ownage Pranks, the best prank call website, has a Voice Changer App coming soon so you can prank your friends with ease!

Want to prank someone but don’t have the skills to do it? Let us do it for you! Send Ownage Pranks a Prank Request and we promise to get your unknowing victim good. We’ll even record it for you so you can have a good laugh afterwards.