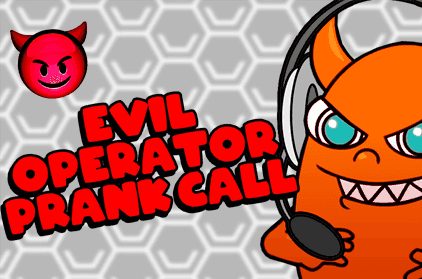 First things first: what is an Evil Operator? Well, Evil Operator was an app available for download for quite some time. It has been very controversial since it raised some concerns, especially from tech savvy people who know a lot about privacy and data protection. The way this app works is that it allows you to call two people at once and make it seem like the two people are just calling each other, when in fact, there is a third person involved. The third persons’ role (the one who used the Evil Operator app), is to record the call and eventually reveal to the two people that the call was recorded and that he/she has a 30-second record of the conversation or worse, they actually heard the ENTIRE conversation! Yikes.

An evil operator prank may or may not be just a playful joke, well, that depends on the situation. Just like any other prank idea that you have executed or are planning to pull off, you have to be clear about your intentions. Just like what we always say here at Ownage Pranks, a good prankster is considerate, but most of all, harmless. They know when to draw the line between just a prank and evil scheming. Why are we telling you this? Well, it's because we don’t want you to end up going in the news because of something like this:

“Just as employees, secretaries, and anyone handling confidential information need to be aware of phishing and spoof email scams, they should also be attentive to any phone calls that come through odd or suspicious circumstances.

Kirk Eady, a Hudson County Corrections deputy director, is on trial in Newark federal court for allegedly eavesdropping on the phone conversations of corrections union leaders.  He made use of a website service that allowed recording of phone calls.

“This was no prank call, this was the defendant’s way of gaining information about his perceived enemies, people he strongly disliked, in order to harass them, retaliate against them,” Assistant U.S. Attorney Amy Luria said in her opening statement.

Point is: apps like this should not be allowed to do these kinds of things in the first place. As much as we want to provide people with entertainment, we should also be able to respect their privacy. The Evil Operator app may be discontinued forever, but that does not mean we cannot have fun anymore, right? Again, knowing when to draw the line between just a prank and something that is actually pure evil is important. Remember that, prankster!

Lastly, it should already be a red flag when you or the person at the other end of the call did not initiate the call. Just to be sure, always ask the person who called you whether or not they actually dialled you for a call. If neither of you didn’t, you have to end the call right away!

Alright, now that you know what an Evil Operator is and why you should not involve yourself in one. Onto our prank ideas and Evil Operator substitute apps to make yourself stay away from serious trouble!

Prank Ideas To Do Instead Of Evil Operator Prank Call

We understand that the idea of Evil Operator prank calls can be really enticing especially if you want to bring your pranking game to the next level. However, since it has now been advised to not use apps like this anymore, we suggest you try out these prank call apps, ideas, and recordings that are equally as fun as an evil operator prank call! You’re welcome! *wink wink*

You can never go wrong with a classic prank call. Ownage Pranks’ prank calling app lets you prank call your family or friends anonymously. What makes it a good prank idea is because we have a speech recognition technology with silence detection, real time analysis, and AI response that works to make it seem like your prank victim is talking to a live person! Let all this translate into action right now and try doing your next prank idea with this!

The purpose of doing an evil operator prank call is calling other people and making them sh*t their pants because you want them to think that the call was recorded and that you have something to use as a blackmail for them, right? How about we recreate that, minus the actual recording part and just fool them into thinking that we actually have a copy of the conversation you two just had?

Here’s what you can do: call your target victim and ask them for some gossip. Better yet, ask them stuff like, “Hey, Ashley? What do you think of Gabby? What are the things you do and don’t like about her?” When she starts to get REALLY into the conversation, tell her that the call is secretly recorded and that you’re going to send the recording to your friend Gabby! Where’s the fun in there? Well, imagine the embarrassment your friend Ashley might be feeling as soon as she finds out that as she talks behind Gabby’s back, Gabby’s actually (well, not ACTUALLY) going to find out what she’s saying about her. Don’t forget to reveal that you’re just kidding about the recording part.

Here’s a secret just for you: what if there is an app out there that can also do the ‘hiding your caller ID’ part from Evil Operator? Yes, you heard it right!  Ownage Pranks has a spoof call app that keeps your personal details private when calling and texting. You can use an alternate number to make it seem like you’re calling from a different number. Now, you can make tons of different prank call ideas using it. Don’t worry, all your personal details will stay safe and secure with us. Unlike other apps, we value your privacy as much as our desire to give you the best entertainment. Go ahead, try our spoof calling app right now!

Another reason why Evil Operator prank calls were fun back then is that it gave people the ability to listen to hilarious prank call conversations over and over again. Here at Ownage Pranks, we have an entire directory of hilarious prank calls by our resident pranksters like Rakesh and Buk Lau! If you’re in the mood to just sit back and laugh out loud to prank call conversations that were so bright that they deserve to be given an award, check out our hall of fame, or better yet, these two compilations of prank calls by Buk Lau and Rakesh!

And that was it for Pranking 101: Evil Operator Prank Call! We might have not given you the actual Evil Operator prank ideas you’ve been looking for, but we tried our best to give you something that is equally as fun as that. Here at Ownage Pranks, we understand your needs as a prankster, but we also want you to prank responsibly.