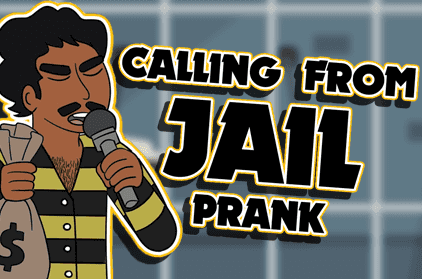 Pranks are a great way to make people laugh. They're fun and harmless, and there's nothing better than watching the look on someone's face when they're fooled. The best part about pranks is that they're always changing and evolving, doing new things to keep them fresh and interesting, and one of the newest types of pranks is pranks calling your friends and pretending you're in jail.

Here are some tips for how to successfully prank call your friends and family, as well as some general advice for those who want to prank their friends but aren't sure how.

What to prepare before prank calling

You'll also want to have some type of recording device on hand, as well as a secondary device just in case something goes wrong with the first one. Next, it's time to call your friend and prank them!

How to prank call people

The first step is to gather the necessary supplies. You'll need a cell phone, a computer, a landline phone, and a friend to talk to. If you want to prank call a friend, you'll also need their cell phone number or a friend to call for you.

Alternatively, you can download a spoof call app that can do all the hard work for you. Our spoof calling app from here at Ownage Pranks can help you stay anonymous when you do the calling from jail prank to your friend by hiding your caller ID without having to buy a burner phone or an extra sim card! Seriously, how cool is that?!

Next, dial your friend's phone number. Take the call as it rings and say something like "hello?" as your friend picks up.

After that, start recording the conversation (remember, your friend doesn't know you're recording them). You can do this by pressing the record button on your computer or by making a voice memo on your phone.

The prank calling culture has a lot of history and a lot of different methods. The most common form of prank calling is when a person calls a person, home, or business and pretends to be someone else. It's a way to get a laugh out of the person on the other line. Prank calls can be done with a friend or family member, or with someone who is not part of your personal life. There are also some famous people who have been prank-called, like Justin Bieber.

In the new prank-calling culture, however, people are using different techniques to call their friends pretending to be in jail. This type of prank relies heavily on technology, but the payoff is often worth it.

If you're thinking about prank-calling your friends pretending you're in jail, there are a few things you should know. First, it's important that you have an actual friend that you can prank call because it's not fun for them otherwise. You should also know that this type of prank requires some special technology, so make sure you know how to use it before you start. Finally, make sure to have an emergency plan in place in case your friend figures out the prank before you want them to.

Finally, it's important to sound like you're in jail. You can do this by speaking in a different tone of voice or even coughing occasionally. These are just a few tips for how to prank call your friends!

What can you say during the calling from jail prank

If they refuse, say, “Please, this is important. You can find me in the directory. I’m in jail.” If they still refuse, say, “Really? It’s not my fault. It was someone else who did it. It was the other guy in the car with me when the accident happened. He ran away when the cops showed up. Please, can you help me?”

Prank calling your friends and telling them that you're in jail

If you're looking for some new, fun ways to prank your friends, try calling them and telling them that you're in jail. If you want to pull this off, here are some tips to help you.

First of all, you'll need to have some idea of what jail sounds like so you can mimic the noise on the other end of the line. You can do some research on YouTube or just ask a friend who has been to jail before.

Next, call your friend and tell them that you're in jail. Make sure to act like you're in a noisy environment so they don't automatically think it's an automated call. Then, hang up without saying anything else.

When your friend calls back, make sure it sounds like a phone call from jail. This is an important detail because it will make your friends believe that you're actually in jail. You can also try texting them to make the prank more believable.

This prank is a good one because it's not too complicated and it's pretty easy to set up. But it does require a little bit of acting talent on your part. However, the downside of it is that they might think of it as a real phone call and try to call the police. That can lead to some very awkward explanations as to why you're not really in jail. If this is something you're concerned about, just be clear that it's just a prank.

First, contact your friend and tell them you're in jail and that they're busted. Explain that you're using a friend’s phone and they need to pay bail.

If you're a great actor, they may not believe you at first. It is important that you stay calm and continue to tell them the story about why they need to bail you out.

If they do believe you, they'll be worried and frantic. If they don't, they'll probably think it's a joke and you'll have to keep going for a bit. You'll probably be able to tell from their tone of voice whether or not they believe you.

When the person on the other end is convinced that you're in jail, start telling them about your bail. Tell them how much it costs and give them a phone number to call.

They will probably try to call the number right away, but it will be a fake number that will just send them to voice mail. Give them a few seconds to figure this out, and then hang up on them so they don't get any more prank phone calls from you.

Hopefully, you've found this guide on how to prank call your friends and family useful. Remember, it’s not just about telling a good joke. When you create a calling from jail prank, you are creating a memorable experience for the person on the other end of the phone. It’s hilarious to think that someone would call you pretending to be in jail on the other end of the phone, but when it happens to you, it’s fun!