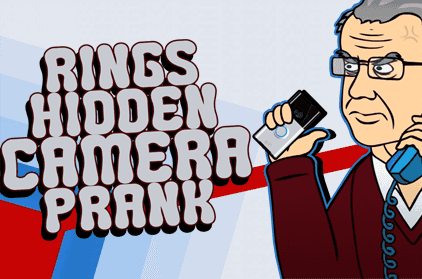 Are you ready for some throwback action? Ownage Pranks is back with one of its newest series, the Throwback Pranks! In this limited series, we'll be looking back at pranks that were a hit when they went viral. For our first installment, we'll see the use of cameras for pranks! Perhaps you've seen famous pranksters make public prank videos with a high-quality camera. While there are tons of cool videos out there, for this one, we'll reminisce how Samara was able to scare plenty of unsuspecting prank victims during the Rings hidden camera prank that went crazy in 2017.

Marketers these days often go beyond their usual means to put whatever they are trying to promote to their target consumers. Most have utilized excellent photos or have created high-quality videos as part of their promotions. Films are no exception to these kinds of marketing strategies as there have been several producers that utilized - you guessed it - pranks to be able to create a fuss over their soon-to-be-released films. With that, let's take a look at how Rings (2017) was able to flawlessly create a commotion about their film's upcoming release with their cleverly devised Rings hidden camera prank!

Did you know that It (2017) also used pranks as a way to promote its upcoming release? You may read about Ownage’s Picks: Best Pennywise Pranks to find out how they were able to pull it off! Better yet - take some notes, prankster-  so you know how you can do them as they did!

The Ring is a popular horror franchise, and Rings is one of the latest installments. And someone used the same premise in those movies to create a brilliant prank video that will be perfect for marketing the movie.

Rings' plot is exactly the same as The Ring, except that instead of a videotape, Samara lives inside the phone of a troubled student, who stumbles upon her one day. Cue video playback. What makes this remake unique is that she actually has a personality. While she was a silent specter in the original films, in the new one she explains why she's out there, and why she chose this particular person to terrorize. How she lives on in the digital realm is the rest of the plot.

In the prank video, the actress dressed as the protagonist is seen pretending to be blindfolded when she drops a ring on the floor; however, instead of finding it, it rolls under the TV. Then, the curtains come down, and the actress begins to walk in circles around the customers with her long, flowing hair before the curtains hide her from view.

The woman is eventually seen coming out from behind the TV and startling the customers. But, at this point, some of the store’s staff come into view of the camera and begin to look perplexed. “The Ring” was released back in 2002 and the movie is widely considered to be the highest-grossing horror film of all time.

How They Did The Rings Hidden Camera Prank

To hype up the upcoming sequel to the Ring, the folks at Paramount Pictures set up a fake TV and wall in an electronics store. They then brought in some unsuspecting customers to see if they could take on the creature from the first film. The unsuspecting customers were invited to check out the latest TV models and inspect each sleek design, LCD screen size, image quality, and other TV features. As they're shown high-resolution videos through the TV screens, the customers were, of course, surprised when a real-life Samara that had just been waiting busted out and grabbed them. The prank victims' reactions were all captured and then shown through a compilation of HD videos.

Why was the prank pulled?

As the clip garnered over 5 million views within the first 24 hours, the perfect video prank was thought up by the Japanese branch of Sony to promote the upcoming release of Rings, the second installment in the American remake of The Ring franchise, which hit the screens in January.

On the film's YouTube page, the teaser said, "You will never see this again. Wait 'til you see what's behind that screen."

What made the clip so scary was the actor wearing a mask was grinning and looking at shoppers after her supposed demise, and not looking the least bit menacing, to put it lightly. As it is with a great prank, people who viewed the clip, whether they wanted to or not, we’re left speechless and unable to move or react.

The studio behind the “Shame Samara” prank was surprised by the huge amount of visitors who went to see the Samara TV set. “Hundreds of viewers have come to watch and take photos of the prank,” the video makers revealed, “some people have even bought it online!”

One of the participants of the prank revealed that when he originally saw the Samara TV set, it appeared empty. “It seemed like she was right in front of me, so I started screaming and running away,” he admitted, “I wanted to go home! I thought it was haunted!”

Imagine looking at a 55 inch LCD screen only to see beautiful videos turn into your worst nightmare; we certainly feel for the prank victims!

Thinking of making your very own prank video?

With how well the creators pulled off the Rings camera prank, maybe this has inspired you to create your public prank videos. Hey, even if you might still be a beginner prankster (or not), possibly one day, you'll be one of those well-known vloggers who make careers from prank videos! If that sounds like the dream, it's best to take note of the suitable prank cameras for you to make excellent quality videos first.

Different camera types and brands come with their own pros and cons, so whether you want to get digital cameras, action cameras, or mirrorless cameras, and whether you're thinking of getting affordable cameras or expensive cameras, it ultimately boils down to the kind of pranks that you want to do and how you picture your videos to come out. However, when considering which cameras for prank videos you should invest in, we suggest that you consider these basic camera features at the minimum:

And that was it for Ownage Pranks' first episode of its newest installment, Throwback Pranks, featuring one of the coolest public prank videos. Perhaps this could even inspire you to use your prank cameras and create your amazing videos. If you have any prank ideas from the past that you want us to feature, feel free to send us a message here, and the expert pranksters from our HQ will try their best to get back at you as soon as they can!

Oh, before we forget, how about you go ahead and check our prank calling app if you’re in for some prank calling action? This works seamlessly because of our advanced AI voice recognition technology. We won’t spoil you any more of the fun details so we suggest you just download them right now!