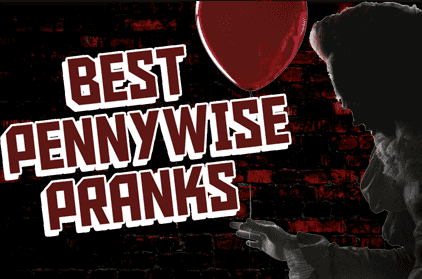 How to Pull a Pennywise Prank Call!

It is already a given that when it comes to OG pranksters, our favorite Mr. Pennywise, coined as the world’s creepiest clown, definitely is on top of the list. With his undeniably *creepy* looks, there is definitely no doubt that pranksters, like everyone here at Ownage Pranks, LOVES impersonating Pennywise creepy appearance and executing some Pennywise prank action, even going as far as dressing up to look exactly like him! Although it is right and just that the great Mr. Pennywise be honored through things like this, it is also worth knowing the man behind the scary facade. Buckle up, kids, we are about to take another Pranking History 101 and learn more about the Monster Clown! Spoiler alert: if you’ve already watched the blockbuster film, It Chapter Two, you might already know some of these facts but if you want some sort of a refresher course, fret not because we are here to give you all of the things you need to know. However, if you’re planning on watching the film, you might want to skip ahead to the best Pennywise prank we could find on the internet!

Actually, we don't which question to ask: Who is Pennywise or What is Pennywise? Is he a human? A ghost? An unknown creature? Is there a true Pennywise out there wandering? The answer is none of the above. Our good pal Pennywise is an alien since he is not from our Earth, heck, he may be isn’t from our universe either. His bits as an alien can be seen through his ability to take place of any phobia you have.

This fact is more prominent in Stephen King’s writings. In the 1986 horror novel of the same name, clubhouses turn to smokehouses to jumpstart scary and eerie visions and were further confirmed by Richie and Mike when they saw giant mammal bats as big as humans and birds fleeing as if trying to escape from something terrible that’s about to happen.

How did it become Pennywise?

It Chapter Two takes it a step further in explaining why Pennywise happened than Stephen King himself did. Among all of the known facts about him, one thing’s for sure: anybody knows that Pennywise is very endearing of children--but in a very different (and unusual) way. The film suggests that Pennywise is an ACTUAL clown how is just possessed by It. This was implied when Marsch (played by Jessica Chastain) visits her old apartment where she grew up with her unfortunately abusive father. As she examines what seems to be an already ancient set of photos, she sees Pennywise standing in a wagon with a text that says “THE GREAT PENNYWISE, THE DANCING CLOWN.” and then sees a haunting vision of how Pennywise gained his iconic mutilated face. Scary, indeed!

“Everything that relates to Pennywise and Bob Gray is very cryptic, and it’s like that for a reason,” Muschietti says. “Probably the success of that character as a monster, as a villain is because of that crypticness and uncertainty that people have towards him. We don’t know exactly what he is, where he comes from, or how Bob Gray is related. Was Bob Gray a real person? Is he incarnated in that thing because Bob Gray played a clown? He knew it attracted children, so that was a perfect bait?” Through this, it is already clear that Bob Gray was an old clown who delights in the laughter and screams of children.

However, our friends at Reddit says otherwise. Here what user Goadmaster has to say:

“The back story for It as a creature is that It crash landed in the area that would become Derry waaaaay back in the prehistoric times. From there It presumably ate and killed the original Derry settlers when they eventually came.

There's no caravan in the story. In fact, Pennywise doesn't appear at all when they decide to go into the sewers--they get attacked by the bird, the crawling eye, and then eventually the spider/the deadlights.

Bob Gray is a name It uses once or twice (when he meets Georgie, and on the envelope he sends to Henry with the knife in it.) The name is one of those things that's kinda just there, there's really no reason other than "alien tries to make itself seem human".

About the turtle, this is woven into Dark Tower lore--the turtle is a force of creation and it carries the world on its back. IT is the turtles natural enemy, because it's a force of consumption/destruction. It's implied that the turtle and a higher power (most definitely Gan) pulled the losers together to destroy It (a quote in the book summarizes this very well, I'm paraphrasing here; "A child will inevitably create the stake necessary to kill the vampire.")

So yeah, there's no Pennywise back story but there is a back story for It as a creature.”

There may be no definite answer to how Pennywise *exactly* happen, but one thing’s for sure: every prankster SHOULD know him and the things he has contributed especially to the prank community. The next time you plan on executing the ultimate prank of the year, you might want to considera Pennywise prank idea.

Planning on recreating some of Pennywise’s gag-worthy moments for your next pennywise prank idea? How about triggering someone’s fear of clowns? Or do you simply want to be reminded of how creepy of a creature he truly is? We saved you the hassle and listed all his iconic and terrifying quotes you can recreate to bring your inner Pennywise persona:

Now that we’re all set and have gathered all the Pennywise facts and background check necessary. It’s time that we assess these best pennywise pranks from the internet-- ranked from best to worst.

My Roommate is Pennywise

Care for some Pennywise prank action to your roommate? This prank is on our list of best clown prank ideas because 1) duh, it involves your unsuspecting and innocent roommate and 2) when this famous YouTuber, Ashley Ortega, did this prank on her roommate, it definitely turned into a taser gun incident! In the video, Ashley’s roommate Corie just got home after seeing the film It and upon arriving, she didn’t expect that her evil prankster roommate had already placed red balloons all across the living room WITH HER FULL-ON PENNYWISE ATTIRE. As she approached her roommate’s bedroom, her roommate didn’t know that she was about to jump and scare her. This is one for the books, for sure!

Nothing beats a seemingly real and believable clown prank. Just in time for the premiere of the film It’s big release, a Spanish program named Programa Silvio Santos decided to pull one of the century’s creepiest clown pranks. This brilliant and hilarious prank idea targeted unexpected passersby and involves a kid on a yellow raincoat (obviously as Georgie) stopping people on the street to ask for help in getting something “down the drain”. Of course, as the natural pranksters that we are, we already know what’s about to pop out when they decide to peep the drain. During the second half of the video, the *real* looking Pennywise pops out of the sewer to chase the innocent victims. This gets a solid ten for production.

Ownage Pranks believes that a trusted prank call is always an easy way to go. Didn’t you know that we have a prank call app that you can try right now? To save you the hassle of doing a Pennywise impression, you can always try it since we use AI technology to make it seem like your prank call victim is talking to a live person.

If you are confident enough about your impersonating skills, you may want to try this Pennywise Prank Call that YouTuber Azerrz did! Want to know the secrets to why he was able to scare random people? Watch the video above and get why this deserves to be on our list!

Have you finally decided to recreate the prank ideas above? Of course, it isn’t enough that you only know what prank idea to imitate! In order for you to be able to successfully recreate these Pennywise prank ideas, you need to be able to look like Mr. Pennywise himself. In this video by Prince De Guzman Transformations, he guides us Pennywise wannabes to how we can look exactly like him!

Moreover, when you learn Pennywise makeup, you can do a Pennywise video call with one of your friends! Exciting!

It isn’t a great marketing stunt if your promotions team doesn’t partner with Ellen DeGeneres for it! After knowing that the film will finally hit the big screens, Ellen, herself, dressed like Pennywise to prank Diddy on her show. This all happened when Ellen informed Sean Combs that she heard news that he was afraid of clowns. Just when he answered with “No. Impossible”, a clown dressed like Pennywise popped out of the table that is behind his chair. A classic Ellen DeGeneres move, for sure.

Cinemas and clowns do not definitely sound like a good combination, especially when it comes to creepy Pennywise pranks. This stunt caught on camera by Twitter user @HG_Hohbes went viral because of his full-blown attire as he greets unknowing guests entering the cinema. He took it a step further when he decided to wander around the dark cinema while the film was playing. It was later revealed that the man behind the Pennywise look was Jordan Gunner, an actor hired by the cinema owner for the promotions of the film!

That was it for our best Pennywise pranks we found on the internet. Are you having the first-time jitters and having doubts about trying these creepy clown pranks? You can always rely on our already tried and tested spoof call app, available for download here whether you’re on iOS or Android. Happy pranking!