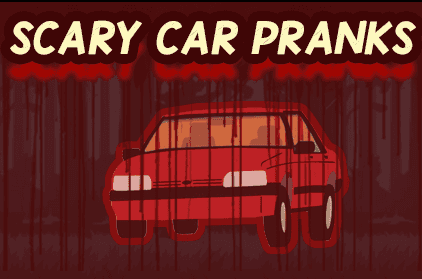 If you’ve made it here, then you’re probably one badass prankster, as you want to fool someone with the use of cars! Word of caution: most car pranks can be dangerous and even life-threatening, so it’s best to keep it on the safe side even if all you want is just fun and games. Forget about going to the gas station! These scary pranks will give you the perfect fuel for laughter!

One of the best ways to drive someone crazy? Prank calls, no less! Pick someone who is easily annoyed or worked up and make them the subject of your ruthless prank. For example, in this Ownage Pranks video, Abdo called an old woman who got her car severely damaged by a nasty pothole on the road. She filed a report on the Mayor’s office for reimbursement and has been anxiously waiting for a call since then. Abdo pretended that he’s a government employee and called to reject the old woman’s request. Grandma's reaction is priceless, especially when Abdo teased her and even accused her of making the pothole even bigger, causing more expenses to the municipal office!

A tip: if you’re gonna work your way through a priceless phone call to piss a loved one off, make sure to download Ownage Pranks Prank Call App, they’ve got tons of prank call scripts that you can use for your victim! There’s also the Spoof Call App for a more convincing prank through a real-time voice changer and fake caller ID!

Put yourself in the shoes of a victim and imagine your car suddenly out of the driveway or anywhere near your home, and you’ll probably hyperventilate! Scare a friend or a family member by stealing his/her car keys in the middle of the night or while they’re somewhere else and moving their car in another area. They’ll most likely call the police, only to figure out they’ve just been pranked!

We all know someone who sleeps like a baby in car rides. Why not take them for a spin and give them a surprise wake-up call by going 15 km/hr and asking the other passengers to suddenly scream for their lives? Your victim’s heart will probably race so fast and he might even scream himself, so make sure to catch the act on tape!

Remember your little sister who screamed like there’s no tomorrow on the premiere night of the movie “It”? Take your prank up a notch by staging a killer clown prank! This act might be more elaborate than usual as you would need help from two friends to wear clown costumes and practice some horror movie acting skills, but it’s worth the shot! In the video, the little girl got scared upon seeing a clown on the road, and got even more hysterical when there’s suddenly another clown on the backseat! Make it up with your scared sis by treating her to ice cream and a happy movie night afterward!

A professional drift car driver is back at it again with another prank! This time, Shawn Lee’s mom was the main subject of the prank as he brought her along in one of his drifts! Her reaction is so priceless and so telling of the Asian mom persona — she almost lost her breath on the whole ride! We can only imagine a thought that should be going in her mind back then: “If only my son just decided to be a doctor than to drift..” We know, mom. If only!

This one’s pretty self-explanatory! Print a copy of a fake traffic ticket and paste this to your buddy’s car. This one will work perfectly if your victim seems to always get fined for breaking traffic rules! Of course, this one’s not for real, but he won’t know ‘cause he’s such a natural, right? Don’t forget to tell him it’s a prank before he goes to the authorities just in case! The prank might go back to you for forfeiting government documents.

Scare your friend off his pants by dropping a couple of drops of food coloring into the wiper fluid. Imagine the look of terror when he uses it and gets immediately confused on why blood is being splashed all over his car! This can get his windshield really messy of course, so make sure to cover the cost of his next car wash to compensate!

This woman makes a ton of money selling pictures of her feet but hasn't been paying ren...