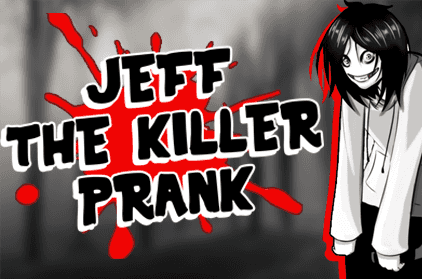 It is not every day that you encounter a very pale, noseless man with very round eyes. Just in case you do, you’re probably screwed up because the infamous Jeff the Killer might be right in front of you! However, he isn’t that bad (minus the sneaking into random people’s houses and killing his family) - because of him, we get to devise ingenious prank ideas like this. With that, we officially welcome you to a fresh (and creepy) installment of Pranking 101. In this episode, we’ll be giving you our favorite Jeff the Killer prank ideas, costumes, and how-tos for your next spine-chilling prank session with your pals!

Wait, who is Jeff the Killer?

If you watch gamer YouTubers, you might have seen some of them play a game associated with this character, but “Jeff the Killer” isn’t a video game itself. Instead, Jeff the Killer is a Creepypasta villain that could’ve inspired the creation of these creepy video games, much like the Slender Man. So now you might be wondering, what exactly is Jeff the Killer’s story?

Jeff the Killer has had a rough time, too. According to his backstory posted in Creepypasta, he was a shy teenager and was given a hard time by bullies around the area. When he couldn't seem to take it anymore, it resulted in a very dark fight with some of his bullies, which resulted in Jeff being doused in alcohol and set on fire. Fast forward, Jeff gets home, kills all of his family members, and ends up sneaking into random people's houses and killing them, which he does after saying his catchphrase, “go to sleep.” If you're up for some frightening story - and if you're planning to dress up like him for your next prank session - we suggest you check his full story on Creepypasta.

Creepypasta is a website that is popular among scary stories and horror fiction fans. It was established in 2008 and has produced many of today’s most talked-about horror-related legends, such as The Slender Man and Candle Cove.

Now that we’ve gotten to know Jeff the Killer, it’s time we go through our list of prank ideas, videos, and how-tos in honor of him. But before everything else, here is a list of things you have to take note of before doing any Jeff the Killer prank on anybody:

Not everyone is going to be up for some bit of fun. With that, it is important to take note of everyone’s mood before you pull off a seemingly innocent prank on somebody. Since we’re looking at prank ideas that are creepy, you’re probably good not doing it on someone that has a faint heart. There are videos out there where a prankster does a joke on somebody and his/her prank victim ends up fainting and/or going to the hospital because they weren’t able to take what the prankster thought was just a fun and harmless one. You wouldn’t want to end up in big trouble, would you?

Prepare a bribe if pranks get out of hand

What if you've gone too far? The cruelest (and creepiest) prank ideas have the tendency to affect people's feelings towards us, or worse: they hate us! If ever there is such dilemma with your victims, then don't worry - all hope isn’t lost just yet! One of these methods would involve giving something valuable like baked cookies and lasagna which has been prepared specially by yours truly.

When deciding whether or not to pull off a prank, timing is one of the most crucial factors in play. You don't want your plan to backfire or your victim to have a heart attack because they're going through something tough at home and have had too much caffeine for their own good!

Onto our Jeff the Killer prank ideas, videos, and how-tos!

Dressing up as Jeff the Killer is easy, but becoming one takes a deep internalization of what he really is like. With that, we suggest that you read all about his story first so you can really get into the character. Once you’re done acquainting yourself to Jeff the Killer, all you have to do is to dress up as one so you can effectively scare and pull off your ultimate Jeff the Killer prank on your target victim.

To dress up like him, you’ll be needing a white hoodie, black jeans, a toy knife, a wig that looks like Jeff’s hairstyle, a pair of black sneakers, and a Jeff mask (or if you can’t find any, we highly suggest you ask a friend who’s really good at make-up to transform you into Jeff).

Jeff the Killer Drive Thru Prank

In this video by famous YouTube Content Creator MagicofRahat, he goes and drives around the city looking for a target fast food drive-thrus for his Jeff the Killer prank. He’s seen wearing a very scary, and honestly, legit-looking Jeff the Killer mask while scaring the hell out of the fast food employees he meets. You can see that most of his prank victims were really scared since not only was he able to pull off the entire look, but he was also able to convince them because of his believable acting skills. We won’t spare you any more of the fun details, so we suggest and go ahead and watch the whole skit!

“I showed this to my friend (who loves creepypasta) and she told me "This is who I aspire to be."

“I’d be the only one that would be like “Oh hey Jeff, you look beautiful as ever.” (You’d understand if you’re in the fandom).”

Next on our list of hilarious Jeff the Killer prank videos is this Omegle scare prank by YouTube Content Creator NukeNorway. What makes this prank video fun to watch is because of the unsuspecting random people he meets on the website and his very smooth transition from his normal-looking self to the now-possessed-by-Jeff-the-Killer look along with his iconic “Go to sleep” famous quote. Get ready to be entertained by all of his prank victims’ reactions by watching the YouTube video!

“Respect to those people who did not disconnect immediately after jumpscare :)”
“3:14 that face you make when your friends walk in on you and there yelling about their taco that you stole from them like 2 weeks ago”

And that was it for Ownage Pranks’ Pranking 101: Jeff the Killer prank. We hope you enjoyed watching and going through our list of Jeff the Killer prank videos and how-tos to help you get into the character the next time you decide to pull off one. A gentle reminder to keep your pranks light and fun at the same time.

If you enjoyed watching other people’s reactions whenever they get pranked, how about downloading Ownage Pranks’ prank call app? This app is easy to use and we guarantee that it works like a charm because we use a very advanced AI speech recognition technology to make your next prank call seamless. Go ahead and try it today!