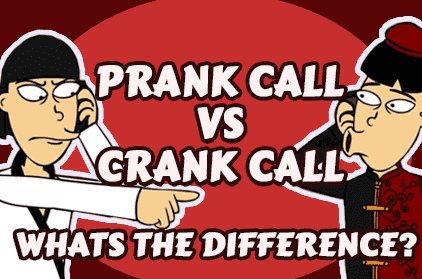 Everyone knows about pranks and prank phone calls. It’s an umbrella term for all kinds of mischief and mayhem. If you are a long-time follower of Ownage Pranks, you should be very familiar with the term and the steps behind it. If you aren’t, you can check out our in-depth blog, “How to Prank Call: Step by Step,” to learn more.

Prank phone calls have years of history. It attached itself with the idea of practical jokes, April’s Fools, and sleepover activities. However, there is another term being thrown in the mix - crank calls.

So What Is A Crank Call?

It’s difficult to give anything definitive. All the online dictionaries paint it as a phone call that is meant to “disturb, annoy, or trick someone…anonymously.” Doesn’t that definition sound awfully familiar? If we were going to base it off the dictionaries - it sounds like a prank call!

A quick search online, however, will show that people don’t necessarily think it’s the same thing. Forums like Reddit and the Stack Exchange show that most people are unsure, but they have their own theories about it. The consensus is that a crank call is basically a harassment call. It is long, frequent, and very annoying. Most consider it mean-spirited and malicious.

The word “crank'' in crank call could refer to someone who is “bad-tempered, annoying, and eccentric.” This definition seems to best fit the common write-ups about crank calls online.

Now that we established the home ground for crank phone calls, we can compare the two. Think about it like this - All Granny Smiths are apples, but not all apples are Granny Smiths. Some prank calls are bound to come across as a crank call - but they are two different things. It’s like a Venn diagram where they have just as many commonalities as they do differences.

Let’s get into the nitty-gritty and see where their similarities end and their differences begin:

There are several similarities between a crank call and a prank call. If there weren’t any, people wouldn’t interchange them as often as they do. Let’s list them down:

1. Both calls try to be anonymous.

When you think about the content of crank calls and prank calls - you don’t necessarily want them to have your personal info - especially your phone number. Nothing screams a backfired call when they can crank or prank call you back.

The techniques behind disguising their phone numbers and caller ID are the same as well. So, you can’t really identify a crank call from a prank call based on how they appear on your phone. Until you answer the call - they all seem identical.

Check out our blog post: How To Call From A Different Number

2. Both calls want to get a reaction.

Pranksters and crank callers know what they are getting into when they make these calls. They are both very deliberate in getting a reaction from their target.

So what does this entail?

It means they will do anything to push your buttons. They poke, they prod, they say all kinds of things and use whatever info they have to get a rise out of their victims. Now, only the end-goal is the same. What kind of reaction can be a very different story.

Check out our blog post: Best Prank Reactions: A Trip Down Memory Lane

3. Both calls get shut down.

A crank call and prank call can be very annoying. It doesn’t come to anyone’s surprise that you get very antagonistic reactions. People will drop the call. They will blacklist your phone number. If you push it enough, they may even call the police (avoid that obviously). They don’t want you to come calling again. Everyone’s tolerance for these calls vary. You can see how they feel about it based on how they shut you down.

This is where the similarities end. Let’s find out their differences.

To the untrained eye, these differences may seem like splitting hairs. Tomayto - tomahto stuff. But the true prankster knows that the weight behind each one is something worth taking note of. Let’s see what the difference is between crank calls and prank calls.

1. Prank calls don’t have to be anonymous.

While anonymity is the cornerstone for most prank calls, it isn’t a must. There are several prank call ideas that can work with people on your contact lists - no masking necessary. In fact, some calls hinge on them knowing who you are.

Crank calls, on the other hand, have to stay anonymous. Given the content - it demands it. When you don’t, you risk being on the end of harassment calls or worse - a lawsuit.

Prank calls are all about showboating. Yes, it is a practical joke, but it’s one that thrives on its entertainment factor. It’s all about the laugh. If no one else finds it funny, then it isn’t much of a practical joke. Since prank calls focus on being enjoyable, there is a good chance the target may have fun as well. Prank calls have the potential to be fun and hilarious for everyone involved.

Since crank calls tend to be mean and malicious - it can be more off-putting than anything else. There is an element of joke and play, but it is tainted by the delivery. So some crank calls might be entertaining, but never for the target.

3. Pranks calls are rarely confused with a harassment call.

We mentioned that there is no way of telling whether the anonymous call is a prank call or a crank call until you hear what they have to say. Prank calls are pretty obvious with their puns, gag names, and hilarious bits. While the trick, the twist, the punchline might take a while, you can rest assured that it is coming.

A crank call, on the other hand, can be very mocking and mean. There is little to no artistry in the jokes, and they can border on harassment. When you pair the content with the calls’ frequency, it’s easy to see why people might mistake a crank call with stalking and harassment.

While Ownage Pranks believes that a prank call and a crank call are not the same - the media begs to differ. And the dictionaries don’t help. They are often used interchangeably.

It doesn’t help that there are shows that switch the terms so often.

The first, and perhaps main, example is Crank Yankers. Crank Yankers is an American TV show by Adam Carolla, Jimmy Kimmel, and Daniel Kellison for Comedy Central. Its original run spanned from 2002 to 2007, and in 2019, it was rebooted.

The show had a straightforward style. It had celebrity guests make crank calls to strangers in Nevada. Then they recreate the entire interaction with puppets for your viewing experience.

Crank call here is used synonymously with a prank call. You can see it in their scripts and bits, not to mention their original title, Prank Puppets, which they scrapped because it seemed malicious.

Urban Dictionary considers this to be the main driving force behind the term crank call and why it is used today. Regardless of the reasoning behind the name - Crank Yankers brought back old-school prank calls into the mainstream.

While there is a clear difference between a crank call and a prank call - people will still switch between the two. And with shows like Crank Yankers - the term is here to stay. The only question is - are you going to do the same? Or will you treat them as separate things? You know what we’d do here at Ownage - it’s prank calls all the way.

Read Next: Ownage Pranks Defines What Is A Spoof Call?