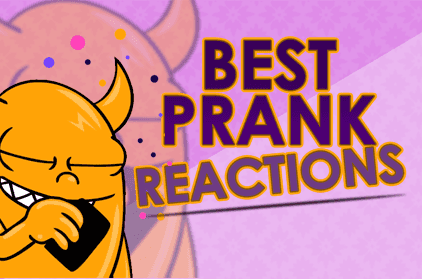 It’s safe to say that my target’s reactions always make the prank. It doesn’t matter if they are confused, frustrated, or furious. As long as it isn’t long stretches of silence - I’m golden.

When you think about it, this effect isn’t reserved for prank calls alone. Even lackluster jokes and boring pranks can be a smashing hit when you get a reaction. That is how powerful it is.

A couple of fans asked me about the best prank reactions we have on video. While so many come to mind, here are the first few that I can think of! These videos show that even with the same prank scenario, voice soundboard, and script - you can’t always predict what happens next. It always depends on the person on the other end. And in my many years of pranking, let’s just say that I had some interesting targets.

You can check out all our latest prank video releases on our Youtube channel. Besides going through our playlist, you can also visit the Ownage Pranks Hall of Fame, where we share prank recordings with the best reactions. Anyway, on to my list!

I’ve done the Wendy’s Stingy Sauce prank a couple of times, but this one takes the cake. I got a lead from a fan that this Wendy’s, in particular, has a reputation for being really loud and extremely rude. And this certainly showed in the video because things escalated quickly!

Let me set the scene: I called Wendy’s as Abdo, our Arab guy, asking why they were so stingy with the sauce. After all, I was “ze sauce man!” It starts calm enough. They ask about my problem then call the manager. But when I ask for a box instead of an extra packet of BBQ sauce - things heat up.

What can I say? Not everyone can handle Abdo. They hung up on me several times. Every time I called back, I met a hilariously loud voice telling me all the reasons why I can’t get the amount of sauce I wanted. Whatever happened to the customer is always right? Now Abdo is just a sad man. If you want to see their reaction, check out the video!

Long-time fans know that this was not the first time I was exorcised over a phone call. The first time was a prank call to McDonald’s. Though I guess I was asking for it since I called with a demonic voice.

However, I did not see this one coming! I called the local Valentines’ Day Fair committee about their listing. They were looking for vendors to set up shop during the event. I think they expected something more PG like heart-shaped balloons, handmade cards, baked goods, and flower arrangements. So when Tyrone offered products for +18 fun like lubricants, adult toys, and kinky costumes, I thought they would be flustered. Instead, they hung up on me.

When I called again, I got a very self-righteous and religious woman on the other end who rebuked me in the name of Jesus Christ. I did not see it coming, but it happened. And it was awesome.

While we like to have our fun with our prank calls, it’s always best to stay on the right side of the law. Prank calls occupy a gray area in the law, so you may or may not go to jail. Thankfully, it’s rare for the police to make an appearance in an Ownage prank call. However, they quickly popped in for this one. I know this wasn’t technically a reaction, but it certainly was an unexpected turn of events.

I called an Indian restaurant as Rakesh. I complained about the naan. The one who picked up must be the same one who cooked because he was angry, like curse-my-family angry. He threatened to call the police then hung up. I tried to call again for the next 30 mins and got nothing. When the call finally went through, I didn’t expect the police to answer. Yikes.

But I loved the exchange. It just goes to show anything can happen in a prank call. It is unexpected responses like this that help flesh out my characters. In fact, this is how Rakesh got his last name and birthday!

The Racist Towing Prank was one curveball after another. It starts off mild. I called a towing company as Rakesh and asked for my car back. I egged him on a little, and he dropped the call. So I tried again to get a better prank call reaction, and boy did I get one.

The towing guy called Rakesh’s mother a dothead. If you haven’t heard that term before, it is a racial slur for South Asians in the US. Since we record all our prank calls, we have one ready for playback. But they were so stubborn and just kept denying it.

Since the towing guy was so stubborn, I called again - this time as Abdo. I said I was a journalist asking about their racist behavior, and they still denied it! Their persistent racism was really an unexpected reaction - even though I had recorded proof!

The video was only 15 mins, but in reality, the call was a lot longer. I had over 30 mins of audio with these guys. He just kept yelling at Abdo over and over again. I can’t believe that this went down, but overall an interesting prank call.

To me, these 4 videos have the best prank reactions. That's why they easily end u in our prank call hall of fame. The angry manager at Wendy’s, the impromptu exorcism on Valentines’ Day, the police visit, and delusional towing guy - you have a little bit of everything!

Like most of the lists I make, these answers are just what I have on the top of my head. If you ask me the same question a week or a month from now, you can get wildly different answers. When you’ve been prank calling for as long as I have, there are just so many options!

I hope you had fun taking the trip with me down memory lane. I can’t wait to top these prank reaction videos. Do you have other Ownage favorites? Tell me in the comments!

Also, if you have spare time and you're looking for some new, hilarious ways to prank your friends, then you should definitely check out Ownage Pranks' prank calling app. With this app, you can make totally believable phone calls that will have your friends completely fooled. Whether you're wanting to play a practical joke, pull off positive pranks on somebody, or just want to have some fun, the prank calling app from Ownage Pranks is definitely the way to go.