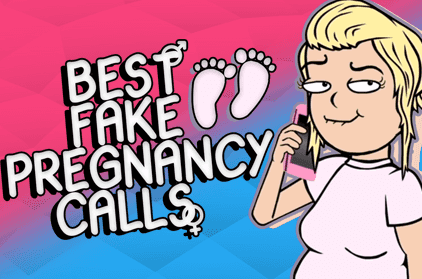 I GOT KNOCKED UP: Best Fake Pregnancy Pranks Told By The Internet

While different people have mixed opinions about pregnancy pranks, a lot of them are undoubtedly hilarious! It’s not every day someone tells you that they have a baby coming on the way. And not everyone is prepared to hear that some people are having unprotected sex either.  These two things are the reason why these pregnancy pranks are ever so interesting!

We went through different parts of the internet to find the best prank videos and stories, so you don’t have to! And later, we are going to teach you how to properly pull off a hilarious prank call. So if you’re ready, read on to find out!

Priyanka is pregnant, and his boyfriend thinks that the doctor is wrong about it. He even pushes that it's just gastritis!

A girl named Rachel calls up her friends in a cheerful manner that she is pregnant. There's a lot of cute and encouraging reactions in this video. It’s cute!

"Hey, this is Dr. Alvarez. We received your pregnancy test results. Is there a time next week you can come here and talk?"

This hilarious pregnancy prank call compilation from Tiktok is genuinely epic, and these parents are not having it! To whoever did these, good job!

A Youtuber by the username "ThatsHeart" made a hilarious prank to her Filipino mother as dared by a follower. If you want to head over to the prank immediately, it starts at 4:56. You're welcome!

Here's one from Ownage Pranks. Tyrone is out to get a guy for having a one-night stand with his beloved sister. No one can break a baby girl's heart without getting served fairly! This is one of the most hardcore prank requests we’ve made. Because boy, the victim’s reactions were priceless!

"This mom is concerned for her son because he has been in a long-distance relationship with a girl in Mexico and is worried he will go down to visit her and get in trouble! Her son wanted me to prank her and tell her that he not only visited, but he got the girl pregnant too!"

A prankster son sent us a prank request to prank his mom about impregnating her girlfriend. See how the prank will turn out, and thank us later!

This prank is another one of our own.

"I called up a professional massage parlor that offers pregnancy massages for women and asked if they could help me out with my unique medical 'problem.’"

You see, you just need to be extra creative with coming up with your pranks. The odder they are, the better! So next time you think about a weird thought regarding pregnancy, you may want to hold on to it a little longer because it may become just as creative as this one!

Here's another funny compilation of "Hey, this is Dr. Alvarez. We received your pregnancy test results. Is there a time next week you can come here and talk?" on Tiktok.

This guy tells his father he got his girlfriend, Anabelle, pregnant, and he’s not having it! Of course, it’s impossible to not crack up with all that scolding.

We found this story posted by someone anonymous on quora and thought it was wack!

This has two parts. Where I was fooled, and then I decided to fool others.

So I have been dating this guy I met on tinder, and things are going pretty well between us. Let’s call him S. Finally, we go all the way and get intimate. We did use protection.

Things were all fine until my period date came and went. And I had recently started becoming regular. So I thought maybe again my hormones were playing and didn’t think much for the next four days. But when it became a week, I started freaking out. I told S, and although he also freaked out, he took up responsibility as well. I used to hang out with his friends as well. Let’s call them A and B.

Now S asks A and B for help over the situation. So the boy buys me a pregnancy test kit. And A assures that his friend is a Gynic and can help if the test did come out positive. No way in hell I wanted a baby.

So on Monday S came to my place and gave me the test before I went to work. I go to office and try to calm my nerves all days. The plan was for me to do the test by evening, by which time he can come and get me. I really did not want to create a scene at work.

The entire day was a mess, and at 4, I went and checked the test. It came out negative. (Thank god). A little relieved, I wait for S to reach my office. That is when I feel shooting pain. I go to the restroom and see that my period has begun! (My uterus really wants to freak me out) At 4:30 S picks me up, and I tell him I got my period. We laugh, have dinner, and go home.

I got fooled and tensed by my frigging Uterus!

Tuesday, S calls me and says that he tried to prank A, saying I was pregnant and I wanted to keep the child. But he was smiling a lot, and A found out. So we turned out attention on B.

Now B is a sensitive guy. Much like S. And knows I have been through shit. So S tells him that I am indeed pregnant and I am refusing to abort since this is my first child and I can’t do it. We give B a plan saying I would be staying with a friend for the next one year and tell my parents that I have gotten transferred to a different city. We all sit in a small restaurant and talk. All the while S is recording the conversation on the phone. I get into character and say a lot of stuff. So midway, we see that my right side is twitching uncontrollably, and we have to stop. After calming my body, we reveal that it was all a prank and I am not pregnant.

B was like, “Order one more tandoori chicken as punishment man.”

Even famous people have their fair share of hilarious pregnancy prank calls! The famous model of the Kardashian-Jenner clan pranked her Momager Kris Jenner,

"So, I have a scenario. I have not gotten my period in a little while, and I was supposed to get it last week, so I was kind of nervous and randomly took a test," Kendall begins.

After that, Kris said she had the dream the night before about her daughter getting pregnant. (Yikes!)

"Really? I'm kind of freaking out. I just don't know what to do," Kendall continues.

"Well, I'll put on my clothes and get over there. I'll tell you, Kendall, you know, you have to do whatever your heart tells you to do," Kris says. "I think it's great news, but I'm your mom."

Overwhelmed by the wholesome yet hilarious reaction of Kris, Kendall finally comes clean by telling Kris, "I love you, and I loved your reaction."

Now that you’ve read/witnessed some of the funniest pregnancy pranks on the internet, then it’s just tempting to do one yourself!

Don’t worry; pregnancy pranks and prank calls are NOT illegal unless you make them be. There are a couple of gray areas to this. First, you will not get in trouble for prank calling unless you do prank calls to threaten, malign, or harm another human being. Second, you get in trouble doing illegal things such as a hate crime, a false threat, or what-have-you. But suppose you're only in the business of making fun of your boyfriend or your family members. In that case, there’s nothing to worry about!

Our spoof call app can always come in handy, especially for any business of fun calls! No need for a burner prank phone! What does our spoof call app do? We collect your information, such as your name, mobile number, etc., and hide it all under an unknown caller ID. Don't worry; we won't ask for any intrusive information! This way, your calls will be untraceable by an average Joe! If you aren't personally gifted with voice acting (as most of us are), then you still have nothing to worry about! You can access our voice-changing feature for a seamless pranking experience!

If you are feeling a bit extra, you must try sending us a prank request! This way, you can leave your pregnancy prank to the pros just like the “You Banged My Sister” prank. Of course, we’ll make sure to give you only the most epic, the most memorable prank call, whether pregnancy-related or not!

Stink bombs have been around for a long time. If you’re looking for the ultimate collection of stink bombs prank ideas, tips, and recipes...

Pranking 101: Break Up Prank Text Are things not working out between you and your SO anymore? Did you catch them cheating on you with ano...

Stink bombs have been around for a long time. If you’re looking for the ultimate collection of stink bombs prank ideas, tips, and recipes...

Pranking 101: Break Up Prank Text Are things not working out between you and your SO anymore? Did you catch them cheating on you with ano...