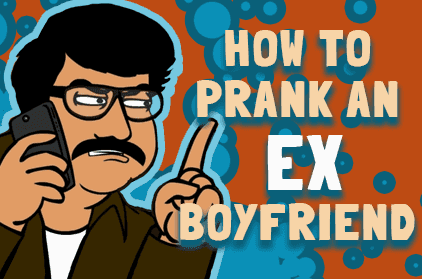 How To Prank An Ex-Boyfriend One Last Time!

Breakups aren’t the easiest thing to deal with. It’s like trying to un-know someone whom you’ve shared too many parts of yourself already and the other way around! Whether your relationship with your ex-boyfriend ended on good terms or bad terms, you could always use everything you’ve learned about them for the sake of fun! Katy Perry once put it in her song so perfectly: Just because it’s over, doesn’t mean it’s REALLY over! Read on to find out how to prank an ex-boyfriend!

But first, we need you to ask yourself these:

While we know you can always do whatever you want, we want you to think things through before pranking your male ex-lover. You don’t want to be too impulsive only to end up with another broken heart and going back to square one when it comes to moving on. Pranking your ex-lover sounds light-hearted and funny, but it can sometimes be a bad idea. Before doing anything, let's have a mini heart-to-heart session and ask yourself the following questions. You will thank us after!

A Prank Call is The Best Way To Mess With Him!

Don’t delete his number yet until you’ve done this! Since you are both rarely keeping in touch and barely seeing each other, the easiest way to prank them is through a good phone call! These are the following reasons why:

Seeing them may just give you mixed feelings about them once more. It's already bad enough seeing his activities on his socials; what more if you see his life in flesh? You don't need to travel to his old apartment to prank him one last time. A what should be a bizarre prank could turn into an awkward prank when they catch you. So stay at home, because you will have everything you need using your phone.

How to make the most out of your prank call:

Ownage pranks gives you the following options to flawlessly and hilariously prank your ex-boyfriend:

If you are in the mood for something quick and simple yet outrageously hilarious, then you can try sending your ex-boyfriend an automatic prank call. It's so simple. All you need to do is pick a pre-made prank script from the vast selection of Ownage Pranks. What's more fun and discreet about it is the calls are performed by professional voice actors playing a role based on your preference! You can always switch things up quickly and hassle-free.

If you want something more planned and elaborate, then you can send Ownage Pranks a prank request! They will help you make your pranking wishes come true down to the last detail. It will be like everything you wish to have in a prank call: an unknown number, a voice actor, and a personalized script. What more could you ask for!?

A spoof call is another simple way to send prank calls without your number being recognized. You won't need a burner phone just to prank your ex-lover. Using a spoof call app simply means that all your details (like your name, phone number, etc.) will be hidden under an anonymous phone number to be unrecognized by the prank receiver. Just make sure you've rehearsed multiple times to avoid failing and having an awkward prank.

Ownage Pranks' online soundboards can help you creatively prank your ex-boyfriend using professional actors’ voices. You can choose from the voice of an Asian guy to a gay guy, an Indian guy, and so much more!

If you want to stick to the older ways of pranking and do a little role-playing, you can feel free to do so! Just make sure to use a spoof call app to keep yourself unrecognized. With this, we listed down four bizarre ideas you can try on your ex-boyfriend.

And these are all the things you need to know when you want to prank your ex-boyfriend! The choice is totally up to you now. Just have fun, and don't forget to guard your heart! Best of luck!

This woman makes a ton of money selling pictures of her feet but hasn't been paying ren...