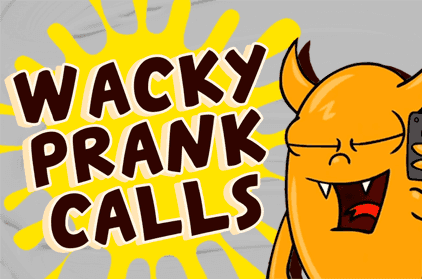 It’s fun to indulge in wacky prank calls every once in a while. You’ll never know what’s coming to you and that’s what makes it sooooo exciting! It's what keeps the adrenaline from rushing! Fake calls have been around ever since telephones have been invented. And even in the age of smartphones, these funny calls are not going anywhere anytime soon. As long as there are phones to keep us connected and playful minds to keep things exciting - prank call ideas are never going to run out.

There's a wide range of pranks available anywhere on the internet, but how do you pull off some wacky prank calls in the age of smartphones? You can do so by simply downloading a prank call app on any mobile device! What does this do? It sends prank calls to anyone you like without getting caught. Don't have an act in mind? Don't worry! We offer hilariously written pre-recorded prank calls that are performed by professional actors to make the funny phone calls more convincing for your victim. They will never know it's you unless you tell them. We vow to keep your identity anonymous when using our caller ID spoofing feature - meaning, we will never display your number in the caller ID when the calls are made. Did we also mention there are many exciting characters’ voices to choose from in this ad-free calling? You have the liberty to decide which ones will play the pranks for you. This is just the tip of the iceberg and you can explore a lot more additional calling features when you check out our prank calling apps. Amazing, huh? Try and make one of the funny calls now!

Ownage Pranks is one of the best (if not the best) prank call sites out there. And now that you know how our epic prank calls work, we listed down the 10 wackiest recorded original prank calls from our users. Indulge in these hilarious reactions from unknown people and you can try sending one by yourself too! It's easy!

Make your friend rethink their actions or just confuse them in general by sending them this prank call. Tell them to stay away from this angry woman’s boyfriend! Oh, and don't forget to have someone hiding with a camera to record the confused reactions!

This one is absolutely an evil prank and will make every victim scared! Who does not freak out when they’re surprised with the news that they have to pay for car damages?! Send this prank to a friend who’s a reckless driver or just someone who drives a car in general. This will throw them off!

Tell your friend to stay away from this guy’s girlfriend. This is perfect when your victim is on the flirty side and would probably think about if they’ve messed with anyone who’s currently in a relationship.

Tyrone is a bit on the jealous side. He's gentle, but you should never get near his girl. You can send this to any dude you know and see how that will react when they are blamed for stealing someone else's girl. Their reactions may even surprise you!

Imagine the confusion when you call someone up randomly and accuse them of calling you repeatedly. That's some inception kind of thing, isn't it? Send this call to anyone you like and confuse the hell out of them!

Cats are difficult to resist when you see them, but what if your friend just gets a random subscription to Cat Facts? Weird, isn’t it? Send this prank to them and find out if they’re a cat person or not!

Tell them their (fake) order is ready for pickup. Did they say they didn’t order anything? No problem, the (fake) police will come to pick them up and give them a lesson!

Rakesh is a little aggressive in connecting to a neighbor's wifi. Send this to anyone you know and watch how they will react. Will they be generous? Uptight? We guess there's only one way to know...

Imagine the confusion when you call someone up randomly and accuse them of calling you repeatedly. One of the most annoying calls you will ever receive in this lifetime, isn't it? Send this call to anyone you like and confuse the hell out of them!

Confuse your neighbors with an unusual sweet request from their friendly neighbor Tyrone. It would be priceless to know whether they’re generous or not!

Numbers To Call For Fun:

If you are in the mood for a more old-fashioned way of doing prank calls but never not in the popular prank list and you want to take things into your own hands (without getting them dirty), then you should try using our spoof call app! Here you can learn how to make old-fashioned prank calls without getting into trouble. Basically, a spoof call app gathers all your relevant information and hides it under a fake caller ID. This way, any average Joe will never know it's you who's calling (unless someone you know rats you out or you confess them yourself.)

With this, we'll let you in on a bit of secret by listing down 10 phone numbers that you can call using our spoof call app.

Don't tell them we told you this, okay? Keep it fun!

Not the most enormously pranky number to call (depends on how you use it) but rather a really cool one. Instead of drunk-calling your sleeping ex, try this instead. It gives you a series of science-backed questions that will help you discover your sobriety.

Sorry, we think this is a safer option to tell someone there's something wrong with their breath. And it's just rude to tell people that their breath stinks, isn't it? If you want to be subtle about it, give them this number, and the other person on the line will tell them precisely what you want to say to them. A little cruel, but....someone had to do it!

In the mood for some poetic experience? Calling this number gives you access to poetically spoken words and phrases. To be honest, it's not just pranks that you can get from this - but some creative inspirations. This is surely a fun option if you are up for that kind of stuff.

Is it a boring time, and you suddenly remember someone who complains a lot? There really are people who are too annoying and unaware of their privilege. Send this number to them, and they will be met by messages that will let them know that people have it worse. So quit complaining!

Whether you are in a pranky mood or you are just seeking your low spirits to be lifted, then you can indulge in calling this number. It tells you how things could get worse, and it's up to you to think if that's a relief or not.

If you are in the mood for some Wizardry and Witchcraft, then this number is undoubtedly one of the best ones to call. You can now live up to your fantasy of having been admitted to the best schools you could ever get into!

You'll get an announcement that says, "This a CPTA announcement test. Uh, I do not know what it is supposed to say; I am not that concerned with it. So, if anyone gets this, just disregard it, ok, and hang up."

That's it. Nothing more.

Isn’t Christmas time around the corner yet? No problem! You can always call this number as a joke and talk to the person in charge of who gets what for Christmas!

If you want to mess with anyone completely harmlessly and randomly, give them this number, and they will be met by lines from the video game God of War.

Are you more attractive, and people always ask for your number even though you're not interested in them? Next time someone asks for your digits, give them this number instead, and they will be redirected to a rejection message which says, ""Hello! This is not the person you were trying to call. You've reached the Rejection Hotline."

It doesn't end there! The hotline will list down possibilities why they've been rejected. This is perfect for doing to pushy people that can't take no for an answer. Hopefully, they will leave you alone now!

Ready to make some wacky prank calls? Better to use them using our prank call apps! Remember to keep it fun yet harmless. Good luck and happy pranking!

Read Next: Top 5 Humiliating Pranks That Are Bad That They’re Disturbingly Good!