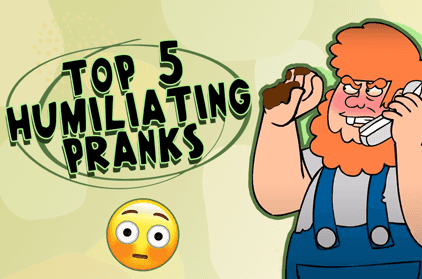 You have probably heard about every practical joke that went too far; where your victims (or friends) would take a couple of days before talking to you again! Too unfortunate for the victims, aren’t they? But have you heard about tricks that are so bad yet so good at the same time? Humiliating pranks doesn't have to be a bad experience for both the prank victim and, of course - the perpetrator/s of the antics. Some humiliating jokes can make you cringe but make you look back at a light and playful time of your life that makes it such a good memory. Because of this, we listed down five real-life humiliating prank stories for inspiration and five more humiliating prank ideas that you can do on your own!

Ready or not, these humiliating prank inspirations are coming at you! Be careful; some of them are hilariously cringe-worthy!

We scoured the funny parts of Reddit and looked for humiliating pranks that these Redditors experienced and some of the - actual products of prank masterminds!

It ended about as well as you would expect it to end.”

“A few months ago I was in the breakroom at work. There were maybe eight of us, half of them are men. One of the girls said: "Did you know that if you lean your head back and close your eyes and pretend to use a saltshaker on your tongue your brain will actually make you taste the salt?" I was the only one stupid enough to fall for it. The worst part is that I didn't get the joke right away. I kept trying even as everyone laughed at me. Eventually, I realized why everyone was laughing but not before one of the guys took a picture of me doing it. He ended up posting it on his FB and tagging me but thankfully he deleted it after I begged him to. I felt so stupid.”

“This one dates back to high school. I was a junior and had just joined the cheerleading squad. Just before the first basketball assembly, I was told by one of the cheerleaders that since I was new I had to do the assembly without wearing my underwear. All of the other girls who had been cheering for a long time agreed that it was "tradition" and that everyone had done it. They said no one would notice and it just was a right of passage type of thing. I believed them so I left the underwear (bra and panties) in my locker that day. Halfway through our first routine in front of the entire school, the basketball coach interrupted us and led me out of the gym. She took me into the hallway and said something like "Did you really fall for the 'no underwear' prank?'". Turns out it was an old, old prank that no one ever fell for. Except for me. I quit the squad right then and there and never cheered again.”

“I had ordered a nice pair of Sennheiser headphones off of Newegg and was excited to have them delivered. I came home one day and one of my roommates told me that I had gotten a package. I was so excited. I opened up the box, and inside was a plastic bag with a pair of headphones in it. Not the headphones I ordered, and they were clearly old. At this point, I did not think even for a second that someone may have switched them out. In my defense, the box was still taped up nicely. I complain to my roommates about the problem and get about halfway through an angry letter to Newegg support before I heard laughing behind me. One of my roommates had cut the tape from the bottom of the box and replaced the headphones inside. Pretty basic, but I fell for it hook, line, and sinker.”

“My parents were having a big party when I was about 12 or 13. Probably about 20 adults. I had spent most of the night in my room but came out to get something to drink. One of the adults pulled me into the kitchen and said I should try a trick. He gave me a coin and then took a funnel and put it in the waistband of my shorts. He told me I had to lean back and put the coin on my head, then straighten up and try to get the coin to fall down into the funnel. So while I had my head back, he took a giant pitcher of ice-cold water and poured it down the funnel into my pants."

Humiliating Prank Ideas You Can Try

There's been a reason why air horns are sometimes a symbol or icon relating to pranks. These are instruments so loud and obnoxious you would never want to be near them unless you want the attention. But even if you want it, do you think an air horn would be a good option for that? This kind of practical joke is one of the most favorite April Fools Day pranks! But going back, air horns are so good with pranks because it's ever so flexible with just a little manipulation of their parts. You can place it behind a door to humiliate anyone who comes inside a room full of people. You can connect a lever to a toilet seat to honk so loudly when someone just tries to sit. These are only the ones on the top of the most popular air horn pranks. So if you ever decide to be a serious prankster, air horns are always one of the best purchases!

If you want to make fun of your officemate, you can do a prank that can slowly but surely humiliate her. The best part about this is they will do this to themselves without knowing that they are being pranked. So here's how it goes: give yourself ample time for this prank to hatch, say, 1-3 workweeks. Each day, you should come earlier to work than them and pull their computer's monitor a half-inch closer to where their face is supposed to be. Do this every day or every other day. The key is to make it unnoticeable. Once they crack, they will complain about having a table too small to do their job, only to know that their computer is abnormally closer to their face. Cruel, but brilliant! And possibly one of the best office pranks you will ever make If done correctly.

This prank is perfect for those who just HATE being the center of attention. No one can be so comfortable when several people sing the birthday song to them - even if you are a real birthday celebrant! Imagine a bunch of people gathering just to sing you a 20-second funny birthday song that can feel as long as a quarter o an hour. Talk about the illusion of time! You can do this when you are out in a restaurant with a shy company. Just tell the service staff that it's their birthday and just when it's time for dessert, they're going to have all the attention and embarrassment you gave them! But hey, there's always free dessert to make it up to them! Who could resist free birthday chocolates at a restaurant?!

Are you hosting a birthday party or any party anytime soon? Good! This prank may come in handy. When introducing two people, tell one of them that the other person has a hearing problem, so they need to amp up their voice's volume higher. Once you introduce them, the unsuspecting friend will start shouting, and the other one will be so dumbfounded as to why they're being screamed at, albeit in a friendly manner. And you? You will be in the middle of them trying not to roar in laughter! But we're sure it would be so challenging to hold it in.

5. Penis on Top of Elbows

Since drawing on people is one of the classic pranks one can ever make, then you better find the best parts to draw on to maximize the fun! When your sibling, friend, or significant other is asleep, lightly draw a penis on the top of their elbows. Why this part?  Because it's where someone pays the slightest attention to! If you look at the mirror, would you honestly usually bother to look at the back of your arms? Not likely, right? And it's not like you'll frequently twist your arm either just to check what's behind! The key here is an intense ink of a suitable marker that can hold the drawing last for good hours or even days!

Now that you know how to humiliate anyone you like with a light-hearted prank, you may want to try doing some funny prank calls by trying our prank call app! Prank calling is the ultimate prank that never fails to give the bursts of laughter that we all want. Now, you won't need to buy all these props and go through so much effort because you will have everything you need for a good practical joke in a single mobile app! Be as discreet as possible because you can have an assigned caller-ID for your victims not to recognize your number. Trust us when we say it's unknown because it is entirely untraceable by the average joe! (Unless you're messing with the federal law, then that's a whole different scenario. But we doubt you'll go that far!)

Do you have an easily recognizable voice? No need to worry, because we also have voice-changer features. If you want something to get that laugh as quickly as possible, you can choose from our automatic prank calls that house many pre-made scripts performed by professional voice actors. It sounds like a load of fun, doesn't it? Downloading it is free, just for you to know what the fun is all about!