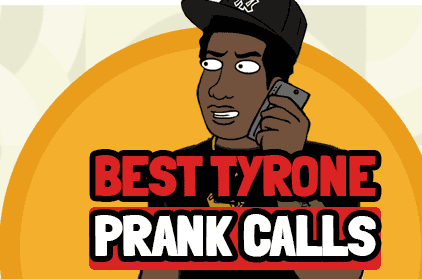 Prank calls are meant to be convincing. That’s why we have a bunch of characters to choose from on our website that professional voice actors perform. One of these characters is the typical tough black guy Tyrone’s voice. Think about that black guy spending six days a week in the gym lifting heavy weights, casually wearing muscle tees, and wouldn’t mind beating you up - put that mental picture into a human voice, and that’s Tyrone! Tyrone’s voice is so masculine and sometimes intimidating that you wouldn’t even think about being pranked when he speaks to you.

How do these prank calls work?

You wouldn’t need to borrow a friend’s phone or a burner phone to get the fun rolling. You just need to choose from our selection of pre-made scripts, select a character to play the part, and we will provide an anonymous phone number to dial your victim. They wouldn’t even know it’s you unless you plan to tell them. Feeling extra and want something more customized and elaborate? You can always request a prank call from us, and we will do the deed for you as you just watch the Ownage unfold!

Now that you know how this works - here, we listed down his 5 BEST Tyrone prank CALLS from our previous prank requests and our hall of fame. We’re warning you; they’re hilariously epic!

You can never talk about legendary Tyrone pranks without mentioning this sweet masterpiece. This is a request to prank a guy named Luke, and it went like this: Luke had a one-night stand with a girl named Brooklyn a few months back, and now Tyrone comes to the rescue as  Brooklyn’s brother, because Luke apparently got her pregnant. (Well, of course, no one’s really pregnant - that’s just to mess with Luke.) The prank hilariously escalated on many levels unexpectedly that Luke needed the help of his parents and was about to call his lawyer! You could hear the panic in his voice so much, and it’s difficult not to burst into laughter yourself.

2. Calling the KKK as Tyrone

People are a lot of surprises, aren’t they? This is one of the most unforgettable pranks we’ve had, and you wouldn’t believe how people could get so mad about a simple phone call! So we granted your request about calling the KKK Tyrone. We paired him with another character Abdo, and you wouldn’t believe how bigoted the KKK guy is! So, Abdo and Tyrone were inviting him over for their dinner party, and sensing Tyrone and Abdo’s ethnicities on the phone - this guy just started threatening them. Watch it if you are not too sensitive about racial slurs. It will be worth it!

3. Stay Away From My Girl

This ranked as the most viewed in Tyrone’s prank reactions Hall of Fame. Tyrone accuses a random guy of sleeping with his girlfriend. He sounds so furious that you could hear the utter confusion in the prank victim’s voice as he tries to piece the accusations altogether!

4. Tyrone, Your Kid Is Mine

Ranking as the second most viewed in the Hall of Fame,  Tyrone calls up on some guy asking to spend time on his child, and the reaction of the receiver to the prank is so entertaining you’d feel bad in a good way!

5. Tyrone, You Made My Sister Cry

Acting as a protective older brother once more, Tyrone gets a guy for commenting nasty things on the internet. This guy’s reactions are so priceless it’s difficult not to gag by the way he said “What!?” alone. This video ranked as the 3rd most viewed in the Tyrone Hall of Fame.

Are you loving our wholesome yet tough and protective brotha yet? If you want something more elaborate as a prank request like the You Banged My Sister and Calling The KKK, hit us up, and we will do the deed for you! But if you want something simple like a quick and straightforward prank call to send to your friends or family, you can easily do it through our prank call app available on Google Play and Apple App stores. We have a plethora of creative pre-made scripts with more exciting characters like Tyrone to play the parts. Our actors are so good; your friends wouldn’t even know that you’re messing with them!