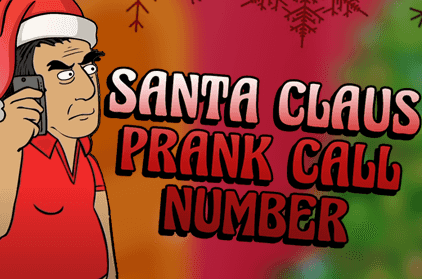 Ho, Ho, Ho! Merry Christmas! It’s that time of year again, where your friends and family are all about the holiday cheer. Maybe it’s just us, but we have an easy time believing that Santa Claus is real. There are so many different stories about him that it seems possible to believe he can be real. Whether he’s real or not, Ownage Pranks is here to give you a fun pranking time with our Santa Claus prank call number ideas!

Children are always on the lookout for that one magical creature who will come to town for Christmas. They get excited when they spot the sleigh bells, get even more excited when they see Santa's red suit, and then get really excited when they're able to say "hi" to Santa himself. Kids like us like getting in on the fun too - by calling up our friends' parents and telling them we've spotted Santa Claus coming down their street!

Prank calling is one of the oldest comedic gags. You call someone, pretend to be someone or something they’d never expect, and see if they buy it. There are tons of different ways to prank call someone, whether you’re a kid who wants to make your parents think Santa got their number wrong or an adult who wants to make a coworker think their boss called them. However, sometimes, people can get a little overzealous with a good joke and go too far.

Who is Santa Claus?

Santa Claus is the most well-known Christmas figure in the world. He is said to deliver presents to all of the good children in one single night, on December 24th. The name “Santa Claus” was derived from the Dutch language, and means “Saint Nicholas,” which means that Santa Claus is not just an invention of Coca-Cola. His appearance varies with culture but has many similarities. For example, he always wears a fur-trimmed red suit and hat, carries a bag of gifts or toys, and often rides a reindeer sleigh.

Santa Claus is a popular figure from European folklore who, according to tradition, brings gifts to the homes of good children on Christmas Eve. In some countries, people believe he also punishes those who have been naughty.

There are many theories about who Santa is, including that he is a she. In some countries, he is thought to be a man from the North Pole. In other lands, Santa is known as Father Christmas or Saint Nicholas. Some think that this jolly fellow is based on a real person from long ago. Others believe that the image of Santa Claus has been passed down through families and friends for generations.

Regardless of how people perceive this jolly old man - here at Ownage Pranks - he can be a good subject for a harmless prank call!

Why do we love Santa Claus?

Have you ever wondered why children love Santa? It's because he brings them the most special gift of all: joy. Children are full of life, wonder, and happiness. They always believe in magic and the impossible. In a world where adults often feel burdened by heavy responsibilities, Santa is a reminder that it's still the season to have fun and enjoy life. He loves to play with kids and give them presents, so they can have a little bit of what they’d like in their lives. Here are some ways in which this magical being has brought joy to plenty of kids in need.

There are many theories on why children love Santa Claus. A popular theory is that he embodies the spirit of giving, which is something that is encouraged during the holidays. He also is a symbol of hope in times of hardship and may be seen as a father figure by some children. Another theory is that kids love how jolly he is, and enjoy stories where they can see themselves being important characters in it. Whatever the reason, if you have children, you know what it's like to have them ask about Santa Claus all year long!

Even though we’re months away from everyone’s most favorite time of the year, it definitely isn’t too early to have some fun through a Santa Claus prank call number!

A successful Santa Claus prank call number execution would not be possible if you use an existing number. The rule of thumb when doing any kind of prank call is that you either have to buy a burner phone or an extra sim card so you can go anonymous when you call your prank victim. However, it isn’t ideal that you spend $$$ just so you can have a great prank session, right?

Fret not, prankster! Ownage Pranks has a spoof call app that lets you go anonymous in an instant. All you have to do is to download the app for FREE (whether you’re on iOS or Android) and follow the instructions given on the splash screen. You’re welcome.

Ask a child what they want for Christmas

The 1-603-413-4124 number is how you contact Santa. Pick up the phone and dial it to have a long chat with the man himself. Sure, he's not real, but that doesn't mean you can't have a good time with it! If you're looking for some free laughs, then this is the perfect number to send to your family or friends!

And that was it for Ownage Pranks’ top Santa Claus prank call number ideas. If you enjoyed going through this article, make sure to share it with every prankster you know as well so we can all have fun together.

Related: How To Pull The Best Santa Claus Prank Call with Ownage Pranks