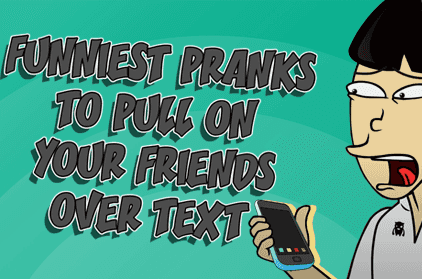 Everyone loves a good prank. A well-placed prank can make someone's day, and what better way to share the joy than over text? Text pranks can be tricky to set up and execute, but they're worth it.

Texting is a great way to connect with friends and family, but sometimes we want to have a little more fun than just the usual back and forth. That’s where text pranks come in. These pranks are perfect for those who like to playfully annoy their friends and family members via text message. Here are some of the best and funniest pranks you can pull on your friends over text.

Consider these things before prank texting your friends

Before we give you our list of pranks to pull on your friends over text, you might want to consider these things first so you don’t get tagged as an insensitive prankster:

When you want to prank your friends, it's usually because you have their interests in mind. Although you might want to freak them out (or scare them), you have to be aware that the result you're trying to achieve might not get through to them because of their reaction. You need to understand what your friend's reactions will be, and then think of ways to get around that.

Prepare before the prank

When it comes to prank texts, planning beforehand can be beneficial. You can either make a text the day of the event or you can have it planned beforehand in case your friend doesn't respond.

Be careful not to hurt your friend's feelings

You want to always consider your friend's feelings when pranking them. You don't want to hurt anyone's feelings, even if they were laughing at your joke. Pranking is supposed to be fun and lighthearted, so don't take it too seriously.

Don't prank people without taking into account how they might feel. If someone isn't a fan of pranks, that's fine, but that's probably not a surprise if you've been pranked before. Just be aware that it might not be the best time to prank someone.

Hilarious Pranks to Pull On Your Friends Over Text

Now that you’ve taken note (hopefully) of the things you have to consider before prank texting a friend, here are some prank ideas to pull on your friends over text:

The “I’m Right Outside” Prank

We all know that feeling when you're about to go home and your best friend texts you asking "where are you, I'm waiting outside" - and then there's nothing outside. What a prank.

That's the perfect time for this prank text! Just select a friend or two (or three!) and send them this text: "I'm right outside." They'll get confused and frustrated, but we can't help it. It's just so much fun to joke around with our friends!

The “I Hate Myself" Prank

This is one of the simplest yet most effective texts you can play on your friends. All you have to do is shoot them a text with "I Hate Myself" as the message, followed by three exclamation points. This will tell them exactly what you don't want them to think. If they send you a negative reply — i.e. "you're so cute!" — all you have to do is repeat your text message verbatim. When they do it, they'll automatically reply to their own text message with something positive!

Tell them you’ve won the lottery

This is an absolute classic. Tell a friend or family member that you have just won the lottery, and they'll be over the moon. Just be careful to keep it super vague, so they don't have a hope in hell of checking if it's true. You could also try mentioning some other prize you've won as a runner-up, like a dream cruise. They'll start hounding you to pay up your prizes (obviously it's too good to be true). If you really can't get away with leaving it vague, try saying something like, "I won an iPhone and a cruise to the Maldives." They'll never be able to check to see if it's true, and it will be hilarious watching their reaction.

Create a fake account and send them catfish texts

Catfish is a popular internet hoax that inspires hilarious pranks. It's not all that hard to fake your identity by pretending to be someone famous, so an account can be an easy and even effective way to prank someone. Pretend to be your crush's ex-boyfriend and try to engage her in the conversation. Or, create a fake account and send your friend a catfish text that starts off with, "Hi, I'm Brian from Italy. I'm wondering what it would be like to meet up with you for coffee?" They might respond with an "aww, my bad," but it will still make them laugh.

The "We're In Trouble" Prank

The basics of the "We're in trouble" prank are simple. Ask the recipient to leave you a message — and you'll receive the following: "Hello [their name], we're in trouble. We're stranded in the middle of the desert and we're going to starve to death. Please send $20 to bail us out." The result is almost always a joyous surprise.

Funniest Pranks To Pull On Your Friends According to Reddit

Here are some of the funniest text pranks that our friends from Reddit has to say:

Prank texts should always be fun and engaging for both the prankster and the victim. A bad prank can be anything from creepy or mean to something so cliché that it's cringe-worthy, and everyone has been on the receiving end of it. There's nothing wrong with not liking a prank you got played on, but sometimes it's just for the sake of a good laugh. Text pranks provide a cheap and accessible way to put people in awkward situations that'll make them laugh. From playful to mildly infuriating, these are the best pranks to pull on your friends over text, so have fun.

If prank texts aren’t your thing, we get you. That’s why here at Ownage Pranks, we have a spoof call app that can help you maintain your anonymity the next time you have a prank calling session with your friends. Go ahead and try it today!

Read Next: How to Prank Call a Friend