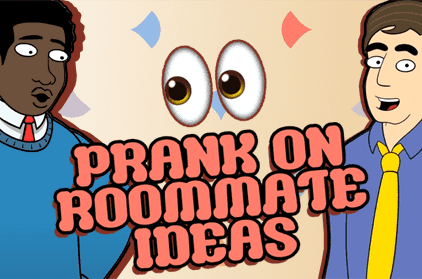 Pranks To Play On Your Roommate: The Best, Simple Prank Ideas For A Great Laugh

Roommates are the best. Most of the time, they're your best friend who you can't imagine living without. But sometimes, they're just your roommate, and that's okay too. Roommates come with their own set of challenges.

Planning a prank on your roommate can be very fun and rewarding. Sure, you might get some bad karma for it, but the payoff is worth the risk. There’s nothing better than having a good laugh and getting one over on your roommate with a great prank.

Pranks are a great way to tell your roommate you care. Roommates are usually the people who are closest to us, so it’s important to make sure they know how much we appreciate them. It takes effort to come up with something original and creative, but these pranks to play on your roommate we’ve compiled should give you some inspiration. From pranking their food to playing an obnoxious song on full volume, here are some ways you can show your roommate that they’ll surely (and hopefully) appreciate it!

Why it is good to play a prank on your roommate

Well, aside from the obvious reasons — like being able to laugh together, or the potential for funny story times — one of the most important things to do with your roommate is to keep things light and fun. You can have a real laugh about things, and remind each other how much you value each other. When you’re together all the time, it can be easy to forget that your roommates are people with feelings, too. Making them laugh and making them smile are crucial to living happily in a home together.

Just remember that roommates are just people, and they deserve to be treated with kindness, respect, and the same amount of consideration and consideration as you. If you don't treat your roommate with these things, it's a good way to show that you're downright mean and you don't care about them.

Pranking your roommate will also let them know that you appreciate them. They'll appreciate the fact that you played a prank on them. This will build a good and light relationship between you two.

Before pulling a prank on your roommate

Before you prank your roommate, here are some of the things you have to take note of so they don't get mad or annoyed with you.

Avoid pranks that are too personal

It can be harmless for you to try and prank your roommate about the homework he/she forgot to do or the only time you can speak to them about your problems. If you choose to go down this route, make sure you do not do anything too personal that you wouldn't want your roommate to know. For example, if your roommate just got engaged or got a new car, it can be fun to prank them about that as well. Make sure your pranks are funny and not mean-spirited.

Don't prank if your roommate is busy

The biggest thing to remember when pranking your roommate is that they are usually busy doing something in their room. This means that the best time to prank them is either when they are relaxing in their bedroom, or after they are fast asleep. You want them to be worried about what you are doing or about waking up while you are doing it, not be worried or scared that you are messing up their room. Prank them when they are relaxed.

Pranks On Your Roommate That You Should Do Right Now!

Now that you’re all set, here are some of the most clever pranks on roommate we have for you, prankster!

Playing A Song On Full Volume

This is a classic prank that you can do with a computer or tablet. Simply download a song from YouTube and set your computer to the highest volume possible. The prank doesn’t have to be just one song either - you can play an entire playlist at the maximum volume. However, you have to take note that the potential annoyed people wouldn’t just be your roommate since you could infuriate the neighboring people as well. Do it with caution!

Prank a Roommate With a Terrible Ringtone

Just because you don’t like your roommate's ringtone, doesn’t mean you need to hold it against them. With this prank, just record a very, very bad song from their favorite band and set it as your roommate’s ringtone. You can begin annoying them once you have started calling them non-stop. Good luck!

Have Fun With Food

Have you ever played a cruel joke on your roommate where you put something disgusting on their food or drink, but then pretend you’re not doing it? You can do that by putting ice cream in your roommate’s cereal or bologna in their soup. This is another classic prank that can backfire on you, so be careful!

Your roommate has probably been friends with you since forever. You probably hang out, live together, and go out all the time. They know the real you — everything about you — but they may not have thought about the way you run your room. As their roommate, you have the opportunity to control the vibe in your living space. Set some fake and harsh rules for your roommate to follow so they know what you expect. Watch how they will react to these so-called ‘rules’ you have started to impose today!

Fake a break-in and hide their things prank on roommate

Many people don’t really think about ways to get back at a roommate for doing something they shouldn’t. Whether it’s hiding their laundry in the dryer or leaving a used condom on their doorstep, they probably will never think it was you.

Here’s an idea that will annoy the heck out of your roommate when they get home. Take all their stuff, pile it in the middle of the room, and make it look like somebody broke in. Put everything they own on the floor in a heap with clothes, pictures, books, hobbies, and anything else you can find.

It’ll really test their patience when they see all this mess and know that there was no break-in. You can take pictures to send once they get home to really get them going. This is a great way to play a joke on your roommate and give them something funny to remember for later.

This is one of the easiest ways to prank your roommate. Sparkles are for winning — not drinking. So one night, put a bottle of sparkling wine in your roommate's water bottle. When they go to open it, they'll be drinking sparkling water, and you’ll be the winner. If they really get mad, you can always tell them that it’s wine and that's what people do when they can’t drink wine.

Having a roommate is definitely fun

The best part about having a roommate is that you get to mess around together. If you're an adult and living alone, you can sneak a prank like this on your roommates by pretending to have slept over at a friend's place, or showering in the middle of the day when your roommate isn't home. But when you live with other people, you're not free to pull some off-campus antics. At the end of the day, though, everyone wants to feel appreciated. So don't forget to prank your roommate today.

If you think that pranking your roommate is too much, you can tone it down through a classic prank call! If you plan on doing so, we suggest you download our own spoof calling app so that you don’t have to buy any burner phone or extra sim just to make your prank successful!

As always, keep it safe and have a happy pranking!