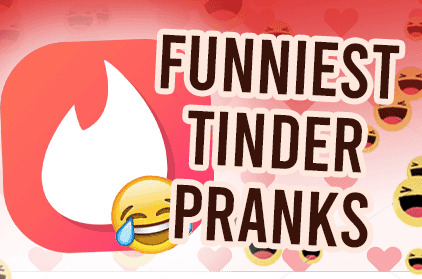 If you're uninitiated about it, Tinder is a popular dating site that connects potential mates on the Internet. It pulls your photos and basic info and lets you match with other users through a swiping feature — left if you're uninterested and right if you want to take things a step further. The latter choice takes you on a chat feature, and you basically wing the connection from there. Some people use the app for romance, some for fun! And speaking of play, did we mention pranks? You read that right. The saying "all is fair in love and war" is true, after all. Below, take a look at some of the funniest Tinder pranks staged on folks who swiped the wrong way. This list of practical jokes is the best of the worst prank results ever recorded.

There's a lot of trial and error on dating sites — some go on a first date and never follow through, while some people just hit it off right away and live happily ever after. Unfortunately for Darren, he has yet to find his fairy-tale as he hops from one unsuccessful date to another. He's surprisingly calm about it, not until Rakesh, an Ownage Pranks voice character, totally trolled him as a brother of an Indian girl he once dated and never called back again. The conversation was glorious as our resident Indian guy insisted on asking for a second date, stating how devastatingly heartbroken his sister is after that one wine-and-dine night. Props to Darren for maintaining his chill and respectfully declining all throughout, even when Rakesh tells him not to beat around the bush, as it's his sister's bush that needs beating instead! Talk about #NSFW!

We all know how disastrous first dates can be, whether through stilted conversation starters or gestures that just don't fit your vibe. This girl, in particular, took things her own way as she pranked her Tinder date into having the worst first date ever through hilarious antics! It's impossible not to giggle when she starts praying for her chicken and farting loudly in front of him (the guy even said it was his fetish! LOL), among many others! Thankfully, her date was a big gentleman even after finding out she was messing with him throughout the date. They had a good talk (an actual date!) after the prank and ended on friendly terms. Here's to hoping a patient guy like him finds the real deal soon!

Top factors for attraction: good looks, charming personality, and a hefty bank account? The good thing about Tinder is that you get to choose and filter your matches based on your preferences and if a private jet trip to London or a sports car does the trick, who are we to judge, really? So when a YouTuber photoshopped his photos and tricked his matches into thinking he was a multi-millionaire, things took quite an exciting turn! Suddenly, his matches grew exponentially, and people actually engaged more in conversations. While catfishing is not cool to begin with, the drastic effect of money on people makes for a good laugh sometimes, doesn't it?

Some girls stand out among the rest, and quite literally at that! It's a norm for guys to date girls shorter than them in height, so imagine most of the dude's surprised looks when the beautiful girl they matched with on Tinder is actually 6'5 IRL! One even took a step back and said he might have mistaken the girl for the wrong person. While it's not a general case, this funny joke prank shows that height is a significant (if not deciding) factor for most men's attraction, after all!

"You ain't loyal unless you delete the app" might just ring true if you're an avid dating app user since it's next to impossible to stay and just allot your time talking to one person. There's an online dating community for a reason: collect and select. As for our pranker Natasha, she wanted to optimize her time and make the big decision in one big event — yes, we're talking about the level of Hunger Games as she gathered them all in one meetup at Union Square one weekend and proceeded to make a speech on what it will take to win her heart. Pretty clever and funny, but not to the amusement of the invited matches, of course! Guess you can say the odds are not in their favor as victims of the prank.

Your journey to finding real romance can take on twisted turns at times, so stay vigilant and avoid becoming the butt of pranks! But all jokes aside, Tinder is a great community to pull on some of the best tricks out there. Just make sure no feelings get seriously hurt in the process!

Download our Prank Calling App for the most elaborate jokes and funniest prank call scripts and Spoof Calling App if you want to call from a different caller ID and play around with different voices. Who knows, your one true love might be there swiping left and right looking for a good time, and some practical jokes might just do the trick. Don't forget to record priceless reactions and send them to us. Our legendary Hall of Fame awaits you.

Read Next: The Best WhatsApp Pranks You Can Play On Your Friends