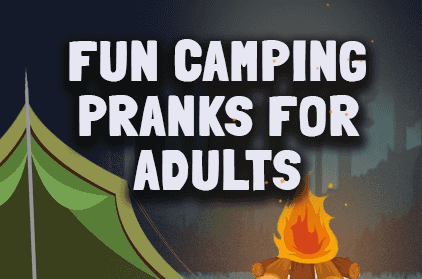 Remember when you were younger, and there's nothing quite like the feeling of late-night bonfires and smores on sticks? Camping might be one activity best treasured during summer days away from school, but that doesn't mean there's no room now for the young-at-hearts to go have fun in the wild! And what's a good camp trip without a dose of laughter and excitement? Below, find some inspiration on how to pull off your own version of fun camping pranks for adults!

Tips on pulling off the best camping pranks

Before you start off with plotting hilarious punchlines on the great outdoors, it's important to stay cautious of your tricks! After all, you're in there to bond and spend precious time with your loved ones, away from the hustles and bustles of daily life. The last thing you would want is hurt feelings or, worse, an emergency trip to the hospital! Not so fun, isn't it? Make sure to follow these tips just in case!

Beware of phobia and trauma

The best thing about pranks is that they usually elicit intense emotional responses from the victims — from shocked to borderline pissed! But something you should NEVER do is expose these people to their phobias or trauma, giving them bouts of a panic attack and severe harm. People facing particular fear respond to slow treatment, not anxiety-inducing situations made just for the sake of laughs.

Stay on the safe side

Camping exposes you to many activities to enjoy, with attractive sceneries to boost even! Given the numerous accidents that can happen in steep biking trails and swimming holes, you might want to veer away from life-threatening or hardcore pranks that can harm your victims physically. The best pranks don't have to cost you an arm and a leg, literally!

Camping sites are situated in mountainous and far-flung areas and are in the wildlife, which means you have the company of animals that might be lurking nearby! Ensure that your well-staged prank doesn't involve sprinkling food that might be appealing to the massive flock of birds that await your squad the following day! Keep it clean as you go, and maintain the tidiness of the area in whatever prank you plan on doing!

Now that you have all these things on mind, it's time for the main event — staging your very own camping prank! We're sending our sympathies to your unsuspecting victims in the future, the future members of #CampPranked!

An oldie but a goodie, no prank list in the woods is complete without the classic Fake Snake prank! You need a long string and a trusty toy snake on this one and make sure that you catch your victim off-guard for this to be highly effective! Wait until everyone is walking peacefully in the woods and attach the snake's strings to your pal's camping bag, allowing it to move along with the person screaming in horror! Record your victim's reaction for you to laugh at afterward; if you don't get knocked down for a cruel deed, that is!

Spidey in the Tree

It goes without saying that food is one of the most exciting things to look forward to when it comes to camp trips. From tasty snacks to flavorful barbecue — camp recipes are just amazing! Ruin the experience (sort of) by hanging a fake spider in the tree above the picnic table, and just when everyone's indulging in their cheesy Enchiladas, drop your secret weapon! We hope they don't lose their appetite in this prank, but it's another good way to catch victims in their unwary state.

Shower pranks are among the most devious ones you can do in camps and the best part about it? You can pick your version of poison! All you need is a good set of food coloring, and then you can unscrew the shower cap and put your color of choice in it! Red is the most popular as it can easily be mistaken for blood, so you know what to do come Halloween camping season! Drink crystals also work fine and make for a tasty treat.

Raise hell to your easy-to-scare friends by slipping a pine cone in their sleeping bags. After realizing that it's not any of their gadgets or belongings creeping on their feet, the victim's emotions will be a sight to behold; make sure to capture it!

Cap off the night with some bonfire — with a twist! Reserve some firecrackers from the New Year's celebration and pop some in the woods as you set it up! You'll surely cackle loads as you see the looks of surprise in the scared campers! Remember to keep it on the safe side and don't go too far with this one, as it might cause harm if not handled well.

Hold up, is that a bear roaring? Or perhaps a wolf out in the wild? Trick your snoozing friends into peeing themselves in horror by playing them recorded clips of scary animal sounds! Camps expose you to various animal attacks (on rare events!), but it DOES happen. And when your friends are led to believe they’re about to play a part in a scene straight outta a horror movie, it’s you who’ll have the last laugh, for sure!

So this one should obviously be staged on the last morning at camp, but make sure you have everyone on board, except, of course, your innocent victim who sleeps like a dead man! Pack up everything early and install a hidden camera to record your friend’s reaction when he wakes up and sees that he’s the only one left in the middle of nowhere, making him regret that he ever joined you in a supposedly fun getaway in the mountains!

So, there you have it for the list of best camping pranks to stage on your buddies the next time you embark on an adventure in the woods! If all else fails, there's one classic way to go: PRANK CALLS. We do have tried-and-tested scripts and soundboards at Ownage Prank Calling App; you might want to check them out! And if you're going to call your victims from the same area, our Spoof Calling App works best in changing your caller ID, with added sound effects and real-time voice-changer to make your act convincing!

Read Next: Here’s How To Prank Your Neighbor!