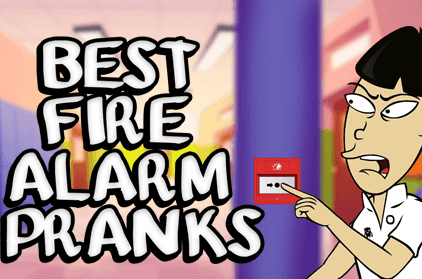 If you are in the mood for some noisy and possibly risky prank action, then you definitely came to the right place. We’re not gonna lie, fire alarm prank ideas are one of the most high-risk pranks that exist on the planet. But just like any other prank idea, when thought with safety precautions and considerations in mind, you might land on and become one of the most epic pranksters in the whole pranking history. Lucky for you, other people have already done these kinds of fire alarm prank ideas and all that’s left for you to do is watch and recall moments that are definitely for the books!

Whether going big or going home, a fire alarm prank is already considered a serious offense in various states. These seemingly innocent false fire alarm pranks have already caused inconveniences and you know what’s worse--police arrests! Heck, we don’t want that to happen to us, do we? Here at Ownage Pranks, we value your safety (and police records, wink wink) so these fire alarm prank tips and ideas are suggested for our viewing pleasure to pranksters like us. If you plan on doing these at malls or at places that should be left touched, skip this and just browse through our Hall of Fame instead. Better yet, download our prank call app if you’re looking for something fun, harmless, and best of all, FREE!

Where It Possibly Went Wrong

Fire alarm pranks were considered to be fun and harmless until they have caused harm to other people and even gone as far as causing a scene for innocent wandering people. We have never failed to tell you this: a pro prankster is a prankster that is thoughtful, creative, and most of all, CAREFUL. Here are five things you should keep in mind if you’re trying to pull a fire alarm prank on your own or your friend’s house or any other prank ideas you have in mind:

We don't want you to be tagged as the “irresponsible and careless prankster.” Remember, a good and priceless prank is a sensitive one. Take note of the demographics of the people around you: are they a young prankster like you, or are they already an old couch potato who thinks jokes are way too inconsiderate and no fun at all? Are they in a good mood to play a classic prank, or are they already sick and tired of fun people (like you)? Worst case scenario: your prank victim gets pissed, and they actually called a policeman, and you got arrested because of a prank you thought was safe and legal. YIKES!

If you want to maintain an excellent pranking relationship with anyone, remember to start with minor, classic pranks rather than going grand right at the very beginning. Testing the waters is a very crucial step, just like any other thing in this world. If they liked the basic practical joke you played on them, then you might want to turn the notch up a little the next time you decide to prank them again!

Crisis alert: your prank victims got really, REALLY mad at you for pulling a fire alarm prank on them, or worse: they start despising you as a prankster! Oh no, nobody wants that to happen, right? If ever you reach this kind of scenario, you should have prepared a bribe to redeem yourself to them (and save yourself from further trouble). This is where the baked cookies or lasagna might come in handy, pal.

Timing is one of the crucial things you should consider when deciding to prank other people, remember that. You need to be able to understand that they might be under different circumstances from you. They might be undergoing a rough patch right now. Her beloved pet dog may have died days ago. To put it simply: they might have woken up on the wrong side of the bed this morning. Talk about bad timing!

All these fire alarm prank preparations will go to waste if your supposed victims are not in their house. So if you want your plan to go smoothly, make sure that your beloved friends or family members are within the vicinity or, better yet—have an accomplice from your target house to inform you whether the targets are there or not!

If you’re THAT persistent and still have plans on doing fire alarm pranks on large places with an unfamiliar crowd. Check these best fire alarm pranks that have gone wrong so you know what might happen to you in the future if you’re careless like them:

Remember when we told you about harmless pranks? Clearly, the person who did this at HIS UNIVERSITY didn’t get the memo. Here’s what the professor has to say about what happened:

“Pranks are sometimes harmless. The night before the TCU football team’s loss to SMU, a large number of cars parked in the Quad Lot in front of the Student Center were vandalized in a rather minor way. The phrase “I (heart) SMU” was painted on their windows. Although the fact that the incident occurred unnoticed by TCU Police officers on duty raises an issue of safety on campus, no major harm was ultimately done. A car wash – or two, depending on how long vehicle owners waited – and all was well again. I got hit, I washed my car, it came off and I laughed at it because no harm was done.

Perhaps no real harm was done here. But pulling a false alarm is like crying wolf: Eventually people aren’t going to take the real fire alarms seriously. And on some level they might lose something important to them that they otherwise could have saved. Sure, the alarm is loud and obnoxious enough to more than likely wake people up and get them outside – if only to get away from the cacophony – so in the event of an actual emergency their lives would be saved. But if students do take a legitimate fire alarm seriously – which would be understandable after several false alarms – they might fail to grab things that are very important to them that they might take with them if they had not had to deal with so many false alarms.

I accept that the culprit who gave me my rude awakening on that Thursday morning will probably never be caught, and that I will have to pay $5 for the privilege of getting out of bed more than two hours early. But I hope that in reading this, someone learns that pulling a fire alarm just for kicks can and does affect people. It just takes one fool pulling a prank to mess someone else’s entire day up.”

The worst possible place to do fire alarm pranks is a school. In this fire alarm prank fail, the board of education at Southington High School voted to expel three students because of what they thought was just a “minor prank.” Yikes.

“The school has experienced six or seven false fire alarms, he said, including at least two -- one caused by a cooking class and one by an art class where students were heating wax -- that were not pulled as pranks.

But in at least two incidents, administrators caught two students who pulled alarms and two others who paid accomplices to do so.

Because the students were all juveniles, their names were not released.

Whenever a fire alarm is pulled, more than 2,000 students, teachers and staff members have to be evacuated while the fire department comes and inspects the building. The whole process can take 30 to 45 minutes, disrupting classes, endangering firefighters and other motorists, and tying up firefighting equipment when a structure elsewhere in town could be burning, Auclair said.

Fire Chief Richard McDonough said there have been more false alarms this year at the high school than in the past several years. "We don't want to be fooling around. We want them arrested and we want them prosecuted," McDonough said.

Setting off ALL ALARMS in parents house *PRANK*

Just when your parents thought that it’s just a normal day, their prankster son decided to have a fun day through a fire alarm prank at their house. This is on our list of best fire alarm pranks since this was done only at their own place. Lance Steward, a YouTuber slash prankster set off ALL OF THE FIRE ALARMS at his parents’ house and their reactions are definitely worth watching! He better has a bribe waiting for, spoiler alert, waking her mom up!

That was it for Ownage Pranks’ best (and harmless) fire alarm prank ideas! Share this with anyone who has a fire alarm prank idea in mind and make them think twice about it. Remember, a harmless prank is the most effective one you could ever pull off. As always, HAPPY PRANKING!