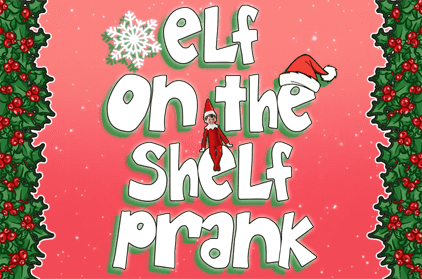 Pranking 101: Elf On The Shelf Prank

Just in case you lost track of time, we are three months away from Christmas. However, even though we’re still weeks away from this most awaited time of the year, Ownage Pranks is here to give you an early treat!

It’s an undeniable fact that when you see elves, you immediately think of Christmas and pumpkin spice lattes. However, when you come across an elf on the shelf, you’re probably on your way to be put on the naughty or nice list - better yet - you’re probably in for some pranking action! With that, we officially welcome you to a festive installment of our Pranking 101 series where we feature a cute and innocent elf on the shelf. Alright, put your Christmas socks on because we’re going to give you the most hilarious elf on the shelf prank ideas and videos we’ve gathered across the internet - as well as some considerations you have to take note of before doing any elf on the shelf pranks.

What is an Elf On The Shelf?

An elf on the shelf is a Christmas tradition where the parents make their children (or the children at heart) believe that Santa has sent his elves to watch for their behaviors. The elves will dictate whether or not a child is worthy to be put on the ‘nice’ list for Christmas. This newly-introduced Christmas tradition lets parents have a stress-free time during the entire duration that the elf is put up on the shelf as they force the children to behave so they could receive nice and big gifts from Santa Claus because who would want to be put on the ‘naughty’ list, right?

Here are some rules you can follow to make your elf on the shelf time fun for you and the kids:

How NOT To Do An Elf On The Shelf Prank

When this mom posted about her gruesome elf on the shelf prank on her son, the Internet didn’t take it too well because they didn’t think it was a very fun prank to do on your child since it involved a rather crime scene looking than a Christmas merry land set-up. This frightening scene made her son cry for almost half an hour. “But my little boy cried and cried. He cried for half an hour. His first words afterward were 'the Grinch shouldn't have eaten her. The Grinch is not allowed to eat her.' I had to open the cupboard and show him that the elf was actually hiding and that it was just a silly little joke," the mom said.

Remember, always keep your prank ideas light and fun, especially for kids! You wouldn’t want to taint the reputation of pranksters to them!

Here’s How To Do An Elf On The Shelf Prank

Grinch On The Shelf Prank

Remember what we told you about telling your kids that the elves only move around the house when they are asleep? How about making them find out that when they wake up the next day, the Grinch is now there instead of an elf. You can even devise a story like “The elves were kidnapped by the Grinch. He told me that he’ll only bring back the elves once you don’t make a mess out of your toys for one week! You have to help the elves get back here!” Not only will you be able to prank your child, but you can also have a clutter-free seven days in your life!

Elves Take A Bath Too Prank

Just like us, humans, elves would want to keep themselves clean and free from dirt, too! For our next prank idea, just fill up your tub with water and soap and put all of your elves on the shelf in it. When your kid asks you where did all of the elves go, tell them that they asked if they can use the bathroom to take a bath. Ask them to take a peek and when they do, they’ll be surprised that there are a group of elves having a fun bath time inside your bathroom!

Once your kid firmly believes that the elves are really there to keep track of their behavior, you now have hundreds of ways to make use of the fact that your children will behave properly when an elf is there. With that, we present to you the Point System! All you have to do is place an elf beside each of the things that you want your kid to do or eat. For example, you can place an elf beside their toothbrush and attach a note saying “+5 Points If You Brush Your Teeth” or you can place one beside their iPad along with an attached note that says “+3 If You Skip iPad Time And Go To Sleep Early”. The possibilities are endless and we’ll leave it up to you on how you’ll ask for help from the elves!

You’ve reached the end of Pranking 101: Elf On The Shelf Prank! Don’t worry, if you feel like it’s too early for these kinds of festive pranks, you can always download Ownage Pranks’ spoof call app instead if you want to make a prank call without needing to buy a burner phone or an extra sim card. Try this app now!

You Might Want To Check Out: Best Santa Claus Prank Calls