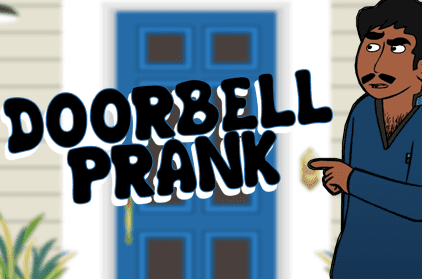 DING DONG! For the next installment of our Pranking 101 series, this prank idea might have already made you experience being the person on the other side of the pranking spectrum: yup, the one being pranked! It has been around for ages that it can already be considered as a cult-favorite since it has been one of the classic pranks that the pranksters have executed in the history of pranking.

Doorbell pranks–ah, yes, even just hearing it brings back so many memories–has unlocked the potential of amateur pranksters like us. It has opened the door of possibilities that have made every existing prank idea today possible. Doorbell prank ideas, having been still executed by pranksters even today, have proven its superiority among all prank ideas through time. Heck, you might have even gotten prank’d when you were younger through this prank idea! Because of this, we believe that it deserves to have a separate guide here at Ownage Pranks.

Before we go through our ultimate doorbell prank guide, as usual, let’s go through the things we first need to consider before executing a doorbell prank. Here at Ownage Pranks, we live by the saying that ‘a good prankster is considerate.’ Thus, we give these kinds of guide for you to be able to sort of *prepare* not only yourself, but also your prank victim, just so your time and effort won’t go to waste.

Doorbell pranks were considered to be fun and harmless until they have caused harm to other people and even gone as far as causing a scene for the innocent ones. We have never failed to tell you this: a pro prankster is a prankster that is thoughtful, creative, and most of all, CAREFUL. Here are five things you should keep in mind if you’re trying to pull a doorbell prank on your neighbor or friend’s house:

Yes, the good ol’ prank-o-meter. We use this to measure our prank victim’s mood from ‘leave me alone’ to ‘heck yes!’ because we don’t want you to be tagged as the “irresponsible and careless prankster.”  Remember, a good prank is a sensitive one. Take note of the mood of the people around you: are they a young prankster like you, or are they already an old couch potato who think jokes are way too inconsiderate and no fun at all? Are they in a good mood to play a classic prank, or are they already sick and tired of fun people (like you)? Worst case scenario: your prank victim gets pissed and they actually called a policeman and you got arrested because of a prank you thought was fun and harmless—YIKES!

A pro-prankster has had its humble beginning

If you want to maintain an excellent pranking relationship with anyone, remember to start with minor, classic pranks rather than going grand right at the very beginning. Testing the waters is a very crucial step, just like any other thing in this world. If they liked the basic practical joke you played on them, then you might want to turn the notch up a little through a doorbell prank the next time you decide to prank them again!

Have a bribe prepared at hand

Crisis alert: your prank victim got really, REALLY mad at you for pulling a doorbell prank on them, or worse: they start despising you as a prankster! Oh no, nobody wants that to happen, right? If ever you reach this kind of scenario, you should have prepared a bribe to redeem yourself to them (and save yourself from further trouble). This is where the baked cookies or lasagna might come in handy, pal.

Timing is one of the crucial things you should consider when deciding to prank other people, remember that. You need to be able to understand that they might be under different circumstances from you. They might be undergoing a rough patch right now. Her beloved pet dog may have died days ago. To put it simply: they might have woken up on the wrong side of the bed this morning. Talk about bad timing!

Check if anyone is available for the prank

All these doorbell prank preparations will go to waste if your supposed victims are not in their house (well, duh?). So if you want your plan to go smoothly, make sure that your beloved friends or family members are within the vicinity or, better yet—have an accomplice from your target house to inform you whether the targets are there or not!

If no one is in the house for the doorbell prank

In any case anyone from the target house isn’t available or might have gone out for a little while and you really, REALLY, are in the pranking mood, you can leave all the hard work to an automatic prank call app (can’t go wrong with a classic prank call, eh?)! The way our automatic prank call app works is that it uses advanced AI technology to make it seem like your prank call victim is ACTUALLY talking to a real, live person. Talk about modern day prank ideas, right?

This doorbell prank that has gone WAY too far

Remember what we told you about the prank-o-meter? Well, this person who got doorbell pranked was clearly in the ‘I WILL CALL THE COPS’ level on the prank mood scale. Read about how this boy who had no idea that he was going to get a gun pulled out on him because of the doorbell prank he thought of as just a playful one:

“The boy and some friends spent the evening of Feb. 12 ringing doorbells and running away, police said in a news release.

The group rang the bell at the home of Dean Taylor at least four times, the man told San Rafael police. Taylor was trying to sleep after enduring a “painful surgery,” his attorney, Anthony Brass, said.

When the children rang his bell again, Taylor, 63, told police he opened the door and chased them on foot. Though the boys scattered, Taylor got into a dark-colored car and continued his pursuit.

The boy told police that Taylor said he was going to drive him to his parents’ house and that if he ever pranked him again, he would “put a bullet in his head.”

Okay, now that we’ve taken note of what we should do and remember before a doorbell prank, let’s get pranking.

We all know the childhood classic ding dong ditch prank, you know, the one where someone rings another person’s doorbell then runs away to leave the homeowner dumbfounded by who pressed their doorbell? It has been around through generations and has helped the pranksters of today become the person they are right now. However, because of the advancement of technology, it took away the fun of the prank. Thanks to the emergence of security cameras, homeowners can now check who came pressing their doorbell and the prankster is now left with no choice but to not do the prank idea anymore.

How about we take advantage of those security cameras and turn the ding dong prank notch up a little? Alright, here’s what you have to do: first, prepare something to give to your neighbor of choice. It can be a food, a gift basket, or anything you have lying around that might be useful to them. Next, hit that doorbell, place your gift at their front door, and leave as fast as you can (before they can catch a glimpse of you through their security cameras) and just as when they’re starting to get mad, they will see your *peace offering* on their front porch and it surely will make them forget about madness! It’s like hitting two birds with one stone: you give you and your prank victim a much needed dose of nostalgia while brightening up their day through a gift.

Apps that are made available through our smartphones have definitely made our lives easier. For this next doorbell prank idea, all you have to do is go to your favorite app store and search for a doorbell prank app and you’ll be surprised by the amount of available options you can choose from! Once you’ve downloaded your doorbell prank app of choice, use it when you and your family or friends are at the common living space, and watch one of them rush through the door just to see that it was just you playing a prank all along. Classic!

If you want to go a little traditional or if apps aren’t really your thing, you can trust the prowess of YouTube to give you the right doorbell sound similar to what you or your target victim has at home! Just type in ‘doorbell sounds’ and hit search and you’ll be amazed by the insane amount of different doorbell sounds available for you to use!

And that was it for Ownage Pranks’ Pranking 101: Doorbell Prank! Stay tuned as we have more ultimate prank guides coming for the full-time prankster like you. Oh, and as always, happy pranking, prankster!

Read Next: Here’s How To Prank Your Neighbor!