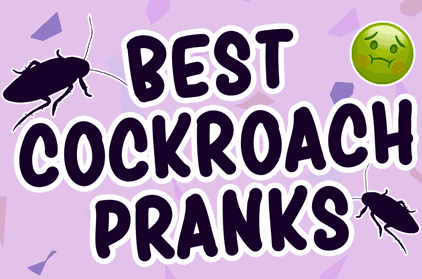 EECK! WHAT’S THAT CREEPY CRAWLER UNDER YOU?! (We got you right there, didn’t we?) Everyone here at Ownage Pranks believes that we should give honor to anything or anyone that makes a person squeal or jump in fear. If you’re looking for a classic yet effective prank idea, then you’ve come to the right place. Just as the saying goes: “when in doubt, do a cockroach prank.” And yes, we just completely made that up!

A cockroach’s prowess to make people scream is definitely because of it’s odd and to others, disgusting look. However, pranksters like us are grateful that they’re made like that because their unusual look is what makes them feared by many and a great tool for the ultimate creepy crawler prank. As much as we want your next cockroach prank to be successful, we also want you to know that cockroach phobias exist and they are definitely a thing. So the next time you plan on pranking someone with a cockroach or any creepy crawler, you should know the difference from a simple fear of cockroaches to something as worse as something called katsaridaphobia.

Just A Fear Vs. A Serious Phobia

Don’t let your prank idea go wrong! Just like what we always say here at Ownage Pranks, a pro prankster is considerate and thoughtful not only of his prank idea but also of his prank victim. To avoid future inconveniences or beef with the person you plan on becoming the target for your cockroach prank, we will explain how you can easily spot the difference between just a simple fear of creepy crawlers to something as serious as a phobia.

What is it about cockroaches, really, that makes them embarrassing caricatures even though they are completely rational and well-thought out creatures? Experts says that it’s maybe because of how you were raised during your childhood years. “Children come into the world largely fearless and curious about their environment. It is through learning - either from negative, traumatic experiences, or mimicking their parents’ own fears - that phobias develop,” said Jolene Hwe, a psychologist at Woman Care (you didn’t expect a little bit of Science there, did you?) “Growing up, the fear reactions that we experience of others around us can contribute to the development of childhood fears,” said Associate Professor Lim Tit Meng, Chief Executive of Science Centre Singapore, which has an exhibition called Phobia: The Science of Fear. “A child who sees people scream at the sight of a cockroach or swat it may develop an equalised reaction towards cockroaches.”

Basically, what this means is that phobias are often conditioned. Your fear of innocent creepy crawlers like cockroaches is developed because of different factors around you. It’s just that some people have severe fear over these kinds of things while others don’t make a fuss about it at all. Just a piece of advice that if you’re planning on doing a seemingly innocent cockroach prank, do background research about your victim so you know you’re not triggering someone’s phobia over a simple joke.

Now that we’re all set and we’ve taken into account several things you need to consider, we can now look at these best cockroach pranks we’ve scoured on the rough surface of the interweb for you to consider on your next pranking time.

Ah, yes. A classic magic trick: what could possibly go wrong? In this hilarious and successful prank video, Dillon (the one who posted) played a *simple* magic trick to his workmate, Jason, and spoiler alert, HE HAS ONE OF THE BEST REACTIONS WE’VE SEEN SO FAR! To do this cockroach prank, all you have to do is prepare a card and a toy cockroach you can buy right now through the links above. “Well done,” user Yorkarenka says, and we couldn’t agree more.

Care to prank your significant other? This prank idea is for you! YouTuber The ACE Family might have pulled the most triumphant cockroach prank, ever! We think that what makes this prank idea successful was how Cathy threw the cockroaches at Austin. This is included in our top picks for the best cockroach prank ideas because the prankster in charge clearly understood what needs to be done and took notes of the things she needs to consider to effectively prank her innocent boyfriend! Surely, there are a lot of COCKROACH PRANK ON BOYFRIEND videos posted across the net but we have only picked the best for you. Why is it the best? Well, the boyfriend obviously did not notice it was a cockroach at first, but as soon as he recognized it, HIS REACTION WAS PRICELESS. Go and see for yourself why this video really deserves its 19 million hits.

In this hilarious cockroach prank video posted by YouTube Channel Charles & Alyssa Forever, the boyfriend decided to have a little fun time with his significant other, Alyssa. What could be a better way to have fun with your girlfriend? Of course, a good pranking action is always going to be a good and easy answer! However, among all the videos we’ve picked to be the best cockroach prank ideas you could find across the WWW, this is one of the high-risk ones since Charles used a REAL COCKROACH to prank his girlfriend. Spoiler alert: he put the live cockroach in the shower while Alyssa was taking a refreshing bath. The moment Alyssa and the cockroach looked at each other’s eyes, Alyssa burst into tears and obviously got mad and irritated at Charles. Yikes! (You better have a bribe prepared, Charles!)

Are you on a tight budget and don’t want to spend money on realistic-looking cockroach prank toys? Fret not, prankster, because we are going to give you an arts and crafts class today! First, find a free image (preferably a high definition, stock image) of a cockroach online. Remember, the creepier it is, the better. Print the photo on white bond paper (or a sticker paper if you have one lying around at home) and stick it to foods or things your kids or your siblings usually touch. A prank idea does not always have to be expensive for it to be successful. You just have to be resourceful and creative, pal!

Frightened People by a Cockroach Prank

What made this next prank idea included in our picks for the best cockroach pranks is because of how raw and genuine YouTuber Nickxar’s victims’ reactions are! In this video set up on the streets, passersby got pranked with the use of a remote-controlled cockroach prank toy. Our favorite reaction from people who got pranked was when this one lady even checked twice to see if the cockroach was really a fake one and not a real one. Props to Nickxar for using a toy cockroach that looks disturbingly real and disgusting. Now that we’re on the topic of realistic-looking cockroach prank toys, you might want to look on the internet for something like that so the next time you decide to execute the cockroach prank of the century, you’ll get the close, if not the same, reactions as the ones who got cockroach’d in the video!

And hey, great pranking etiquette, Nickxar! Even saying sorry to the people he pranked on the video. A gentleman prankster, indeed.

Just like in the previous video, the YouTuber gang Ireland Boys Productions decides to take it on the streets. As they brought their cockroach toy (and even naming it), Carl, to the streets, it was undeniably a success since people either get scared or laughed just by the sight of the giant cockroach. However, there was this one woman from the grocery who got pranked and obviously DID NOT FIND THE COCKROACH PRANK FUNNY! This goes to show that in doing prank ideas, you have to be considerate of things we always remind you: timing and making careful consideration of your demographics! You don’t want to be called an a**h*** just like how the woman called the prankster in the video, right?

Ready for some unboxing action? In the two previous cockroach prank idea we’ve featured here in Ownage’s Picks: Best Cockroach Pranks, what made them really, really effective and easily a crowd-favorite was with the prop they used. This video from YouTuber Unbox Junkie featured this remote-controlled cockroach that moved as if they were real, live cockroaches! What is even better about this remote-controlled cockroach prank toy was that it makes a sound as if there really is an incoming creepy crawler towards your victim of choice! Watch it in action in the video above.

You’ve reached the end of our best cockroach prank ideas and we hope you learned a lot of creepy crawler facts. What made all these cockroach prank ideas worthy to be in our Ownage’s Picks: Best Cockroach Pranks segment was because of how the pranksters in charge made careful research of their target demographics, the timing of when the prank is going to be executed, and the right props and prank toys to utilize.

If a cockroach prank creeps you out, you can always stick to the trusted prank call app we have here at Ownage Pranks. The way this automated prank calling app works is we use AI to enhance your prank call experience to make it seem like the prank call is real! Technology, right? Anyway, best of luck, prankster. Make us proud!

Read next: A Prankster’s Guide To Kool-Aid Pranks