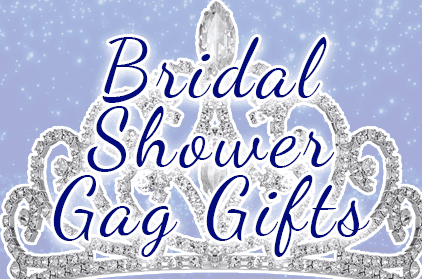 Best Wedding Shower Gag Gifts You Could Ever Give

Wedding preparations are officially commencing. It’s only a matter of time before the groom-to-be finally puts a ring permanently, and everyone’s just over the moon!

If your friend is getting married in the near future, whether it's next year or next month, you've definitely thought about what presents would be ideal. When it comes to upcoming weddings, you may expect to get a lot of gifts. You have plenty of chances to give the bride a gift she'll appreciate from the bridal shower all the way to her big day.

This is where a bridal shower comes in, after all, you only get to celebrate pre-wedding jitters (almost) once in a lifetime! Counting down the days that lead to marriage is exciting but also nerve-wracking, so check out this article for the best bridal shower gag gifts to keep the fun going for the bride-to-be!

Getting invited to a wedding is one thing, but to a bridal shower? Speaks volumes of your relationship with the bride-to-be! Give her the love she deserves (not that she wouldn’t get a ton once she starts her own family, of course!) on her special day. Remember, it doesn’t matter which budget you’re in, it’s the thought that counts the most in these types of celebrations!

Don’t be afraid of going #NSFW

The best thing about bridal showers is you can get as #NSFW as you can get. Hey, you’re down to celebrating the special girl’s last day as a legally-single woman, after all! Nope, it doesn’t mean you have to invite all the hot guys you girls have been eyeing on once at a party (although incredibly tempting, if you ask us!), it’s more of preparing her for the head-in-the-clouds phase of honeymoon between newly-weds! Guiltlessly splurging for a trip to Balesin is one thing only newly-weds don’t mind, so help the bride make the most out of the trip, IYWIM!

Go have some fun!

Of course, you might have the seriously-thoughtful gifts linked from the wedding registry, but that doesn’t mean there’s no extra room for some gag gifts, right? Get to shopping and do some scouring for the funniest, craziest gifts that will have the bride cracking up at her very own bachelorette day! Pair up with the best games on the day itself, and it’ll be a day to remember, for sure!

We said it earlier, and we’ll say it again: Go big or go home when you’re going to a honeymoon at Balesin! Amp up the excitement by giving the bride an underwear designed to resemble a wild animal’s! After all, that’s how they’re supposed to act during intimate times, right?

Spruce up the bride’s first night with her husband with a towel that’s fit for the occasion! Now don’t be silly, it doesn’t mean you there’s a specific material for wiping down the act (or is there? Kidding), just a printed text that states its purpose is enough for laughs!

The kitchen is one of the places a wife who loves to cook would always go, so make sure she’s dressed for the hot chef part by gifting her with an NSFW Apron, no less! Go crazy with a design, photo, or a statement, just make sure to tell the bride to keep it for her husband’s eyes only. Yes, opt for a non-kid friendly!

Every newlywed needs a honeymoon survival kit; they’re navigating through unfamiliar waters, after all! Not that it’s not one of the best stages to be in as a couple, but they probably can use some help or two, especially if it comes from a veteran!

Gift them a present like no other: their very own survival kit composed of lubricants, “Do Not Disturb” signages, the list goes on and on! Also, you may soothe the senses with a gift basket full of bath products and body care items. Some of the most seductive aromas include jasmine, vanilla, cinnamon, sandalwood, and lavender.

Hey, you’re the expert, so you decide!

Need we say more? This one’s perfect for the makeup-loving bride who loves a good lipstick for a date night. Take it up a notch by giving her a penis-shaped one. Who knows? It might just be her favorite for those days she needs a good perk-me-up! Get it in the shade she loves the most for a killer look!

Oops, only do this if the bride-to-be isn’t second guessing about her wedding and is one of those folks who are still hung up on a person from the past. Seek help from her ex-boyfriend to whom she’s on good terms with and stage a hilarious prank call! Stopping a wedding and begging for second chances are usually dreamy in movies, so why not do it in a prank call for some real-life laughs?

If you’re looking for the best scripts to make a convincing prank call, download the Ownage Prank Call App! Just in case the ex-boyfriend prank isn’t feasible, you can do the deed yourself through the Spoof Call App. Don’t worry about getting caught! There’s a real-time voice changer and you’ll be issued with a different caller ID.

Read Next: Best Fake Pregnancy Pranks Told By The Internet