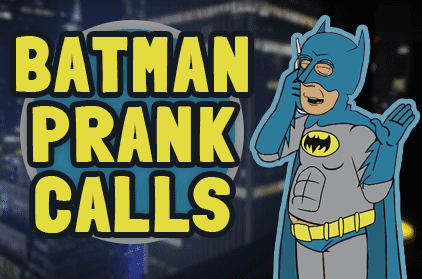 Defender of Gotham Strikes Again: How to Prank Call as Batman

Whether it is a kid who is newly potty-trained or an old man in a retirement home - there is bound to be a Batman fan among them. The Dark Knight’s franchise has expanded every which way from family-friendly series to (potentially) R-rated movies. While DC’s latest films have been kinda touch and go with the critics, it doesn’t stop this superhero fan base from growing. And where there are fans, there are pranking opportunities.

Put on your favorite Batman voice and make your prank calls!

Batman 101: For The Superhero Noob

Now, it’s easy to spot the Batman fan. There is no shortage of them. But what do you do if you don’t know who he is?

If you’ve been living under a rock since 1939, here is a crash course on Batman.

The Batman comics focus on the adventures of Bruce Wayne - heir to Wayne Enterprises by day and crime-fighting vigilante by night. Ever since the murder of his parents, he protects the streets of Gotham with his alias, Batman, a hooded figure with the skills and technology to take down the worst of the worst. He goes head to head with several recurring characters, with the most famous one being the Joker (Heath Ledger anyone?)

He is a master detective who is ready to take on any challenge.

And that’s it! That’s the origin story. He is an intense character who, as Superman said in Justice League Ultimate “[a] man won’t quit as long as he can still draw a breath...”

How To Make A Batman Prank Call

There are several ways you can make a Batman prank call. Just take your pick from any of their iconic characters and set the scene. You can copy something directly from the franchise or Frankenstein your own script - there are so many interesting ways you can bring Gotham City to life in a phone call.

Here are several ways you can make a prank call - Batman style:

Get Your Script Ready:

Whenever you do a prank call, it is a must that you have a script ready, especially if you are just a beginner. You don't want to fumble mid-call because you forgot what you were about to say. One dead giveaway of a phone prank call is when you lose track of your story. Invest some time in writing your script. This will also allow you to find any loopholes in the story and even personalize your prank. You can sign in to YouTube and watch how to do a prank call so you can have some ideas for your script.

Ben Affleck, Christian Bale, Michael Keaton. Memorable actors of the role of Batman. One of the most iconic aspects of playing Batman is the deep, gruff voice that Bruce Wayne takes on when he is dressed as the vigilante. Practice this part and make sure you can sustain the voice, regardless of the situation. Don't break character even when you're flustered.

Ready? Got your script? Now go call your unwitting victim. Make sure to have loads of fun and give it your best shot!

One of the best tricks that you can play on your family or friend is to string them along on a lengthy, exhausting phone call. This is great to do on people who are generally too nice to just hang the phone up. You need to write an extensive, and I mean LONG, script here. Really get your victim hooked on your story.

Familiarize yourself with Bruce Wayne's backstory and narrate it in a compelling manner. Make sure that you've incorporated everything into your script, his parents' death, his butler Alfred, his journey towards becoming Gotham's richest at day and Gotham's vigilante at night. Insert all of this in your story.

You can call someone and just tell them you want to talk or better yet, ask them for their details and then give Batman's back in response. This prank would go great with a Batman fanatic. They'd have an inkling of who it is but they wouldn't be able to figure it out.

Stretch out the entire call, 10, 30, if you're bold maybe even an hour! Really write a sob story about how you're sad about your parents were killed in front of you when you were young, the pressure of inheriting a huge amount of money, etc. Add some mystery with the "vigilante side." You can drop lines like "I'm sort of a cop but not" or "I work at night."

Don't let the prank go as long as you have them hooked on you. When they ask, "Who exactly are you?" That's when you drop the bomb. "I'M BATMAN!"

Listen as your friend struggles with the reality that they just wasted precious time on you. You'll probably hear a disgruntled scream or that satisfying beep that meant the call was dropped.

Need some help? Lean on the professionals and request a prank call today!

Read Next: Best John Cena Prank Calls the World Has Ever Seen