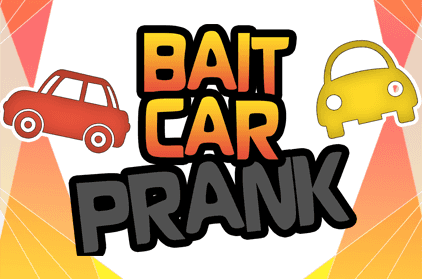 Cars have definitely made our lives easier. If you need to go from one place to another, cars. If you need to move loads of stuff from your home to your friend’s place, cars. If you need a new pranking idea to bring your A-game, cars! With that, we officially welcome you to another fresh installment of Pranking 101, Ownage Pranks’s weekly dose of ultimate prank guide you can do with your friends and family. In this guide, we’ll spice things up a little by doing some bait car prank ideas! The bigger the prank idea, the better it is, right?

Before we give you our favorite bait car prank ideas, take note of these things first:

Just like any other prank ideas we have in our Pranking 101 series, we give you these things you have to take note of first so that you don’t get tagged as the insensitive prankster - or worse - get yourself in big trouble!

Take Note Of The Car You’ll Be Using As Bait

If you’re going to be doing a bait car prank, it is very important that you use a car that you own and NOT someone else’s. Since these bait car pranks can get pretty messy, we suggest that you use only cars that are under your full control. We’re already warning you that some of the bait car prank ideas we have here might require you to do a thorough cleaning afterwards, so keep that in mind!

Work Your Way To The Top

Bait car pranks are on the other end of the prank difficulty spectrum. Since cars could cost more than your ordinary prank devices, such as jell-o, tv remote, or fake blood, it’s best that you do this only if you’re an experienced prankster. If this is going to be the first time that you’ll be doing a prank to your friend or sibling, you might want to check out other prank ideas we have here at Ownage Pranks. Don’t worry, you won’t run out of prank ideas because there are a lot of them here!

What do prank calls and bait car pranks have in common? Well, they both are fun pranks you can do to have fun with your friends! While we’re already on the subject of prank calls, are you aware that your favorite Ownage Pranks has its own prank call app you can try out for free, whether you’re on iOS or Android? Our prank call app works like a charm by using AI speech recognition so your prank victim isn’t going to suspect that they’re talking to a recorded voice, and not a live one. Go ahead and download it right now!

Bait Car Prank Ideas You Can Also Do To Your Friends!

For our first bait car prank idea, famous YouTube Content Creator Johal decided to have a mix of social experiment and public prank with his rat trap bait car prank. In this video, he explains that he did this prank by rolling down the windows, enough for passersby to take a peek of what’s inside the car. Now this is where it gets interesting: unsuspecting people will see that the glove compartment is open with a lot of money (of course, fake ones) and this will entice them to rob the car. However, even before they realize that the money isn’t real and that they are being recorded, they will get zapped by a mouse trap! Serves them right, huh?

In this popular bait car prank video with a whopping 6.2 million views, YouTube Content Creator Just Viral TV decides to give thieves a taste of their own medicine. For this bait car prank, he uses his luxurious McLaren car to lure people into stealing them without knowing that the car seat is covered with an electrocuting mechanism that can zap anyone who’ll sit on it with just a press of a button! What makes this video fun to watch is because we get to see bad people get hurt because they definitely deserved it!

Last but definitely not the least, you can easily pull this prank off because it involves just the trunk of your car. You can do this to your target victim by leaving a box of MacBook inside the trunk and leaving it open until someone gets lured to *steal* it. Once they open the box, they will be surprised that the only thing that’s inside is a note saying ‘Hey, pal. It’s not cool to get other people’s stuff!’ instead of an actual MacBook! Don’t forget to place a hidden camera inside the car so you can capture the moment.

Note: If your friends are really your “friends”, they would actually just close your trunk so others can’t steal your stuff inside it but if they get it without asking your permission, then you might want to think twice about your friendship!

That was it for Ownage Pranks’ Pranking 101: Bait Car Pranks. Remember that bait car pranks aren’t just pranks, per se. They can also be used as a social experiment to see whether people have good intentions or not. But as always, remember to keep it safe so you don’t end up harming yourself or other people!