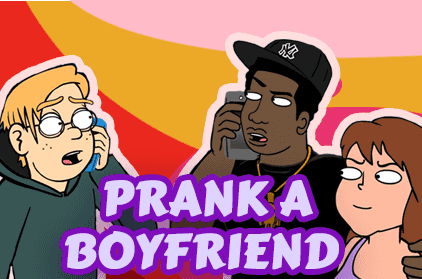 Couple prank wars are all the hype on social media. Just scroll through your Instagram or TikTok newsfeed and I’m sure you’ll find at least one video of a couple pulling pranks on each other. Even YouTube is filled with hundreds of couples pranking each other. Some of them are funny and cute, while others are just downright cringe because of how obviously fake it is.

Still! It’s something fun to do with your special someone. Do you want to start a prank war with your friends? Ownage Pranks has your back. Here are some ideas you can check out if you’re planning to do a prank call on your boyfriend:

Let’s start with something simple and innocent. Call your significant other and make it sound like you’re the one answering the call. Try to initiate a casual conversation with him. Drag it on for a good 3-5 minutes, and then finally ask, “So, why’d you call me?” The confusion that follows is natural and to be expected. If he insists that you were the one who called first, insist harder that you didn’t.

Act like you’re upset if you want to take it a bit further. Get him to apologize, even. He, for sure, will check who called whom after the call. When he realizes he’s right, don’t apologize. Let him figure it out. OR you can turn it up a notch and make him feel guilty for being upset at you. Some tears and a fake walkout usually does the trick.

Prank wars don’t need formal declaration. So you can leave it up to him to figure out. If he catches on? Let the games begin. If he doesn’t, you might need to make it official like Jimmy Kimmel and John Krasinski.

If you don’t want a simple and innocent opening act, try this idea to take things up a notch. This is a step up the prank call ladder. For this, you want to wait for him to call you. And when he does, boy, will he get the confusion of a lifetime.

Answer his call by asking, “Hello? Who is this?” He may not understand what’s going on at first and would still try to talk to you normally. If he does that, assert that you do not know who he is.

Say things like, “I’m sorry, you must have the wrong number,” or, “I'm not your girlfriend.” Drop the call. You must sound convinced that you do not know who he is. Let him call a few times. And then go as far as saying, “If you don’t stop calling this number, I’m gonna block you.”

When he goes to your apartment, act like you still do not know him. Don’t drop the ball by making a face. You need some serious good acting skills so make sure you practice your poker face in the mirror! You can even pretend to call the cops because a stranger “broke into your apartment.” (Obviously that would be a fake call)

Don’t forget to record the entire thing so you have something to laugh at afterwards.

Ah, this is a timeless classic in prank calls. While we all know you don’t need instructions with this one, let’s cover it anyway. The rules are simple:

Timing is essential. Only make this prank call before or after your period. Never during! If your boyfriend is observant - the jig is up. The timing should work out. Also, do some math. It wouldn’t make sense to fake a pregnancy test if you’ve never done *that*.(It would but that’s a totally different prank.)

Start the call slow and act nervous. You can skirt around the topic by saying, “oh, what do you think about having kids?” Or ask about their future plans, “do you think we’ll ever get married?” It should click.

This prank has been done countless times before. But in the spirit of taking things up a notch, you may want to check out how this fake pregnancy prank call went, and do something similar!

Call your boyfriend out of nowhere and freak out on him. Tell him how you’ve gotten so much uglier since you two started dating. Or how you’ve gained weight instead of losing and you have no self control when it comes to food. It’s up to you what you want to freak out about.

Go ballistic! He will try to comfort you and say that you’re not ugly or fat. When he does, ask him, “Are you calling me a liar?” Unleash your inner psycho. Scoff. Cry. Raise some hell. Doing this when he’s in public is perfect. Have a buddy of his film his reaction so you can watch him squirm.

Accuse him of calling you a liar. Tell him that you know you’ve changed a lot. And him denying it doesn’t make you feel good. Just go around in circles with the “I’ve changed,” and, “Are you calling me a liar?” lines. Watch as he completely loses his mind trying to think of the right thing to say. Ha! You got him good.

Remember this is just a prank. You might legitimately lose him if you keep it up for too long. Draw some boundaries so you don’t end with a break up. Keep in mind that this is all done for fun.

For this, you need to ask your best friend to be your accomplice. Plan out everything with them down to the last detail. You don’t want conflicting stories.

Let your boyfriend know that you are coming over to your best friend’s house for a sleepover. Of course you’ll do that, but don’t text your boyfriend the whole night. Only contact him when the night is over. Maybe send a selfie as well.

The next day, hang out with your boyfriend with no phone. Let your best friend call him. Make sure your BFF is pissed and ask if it’s true that the two of you were together last night. Because you cancelled the sleepover and said that you’re with him. If he gets suspicious, your best friend can say that they are just worried about you because you haven’t sent them a message yet. Now, wait and see what your boyfriend will do. Will he cover for you or will he make you take the fall?

This certain prank call requires a bit of improvisation. If you need help with that, check out this blog post for improv tips that can help you.

These 5 boyfriend prank call ideas are pretty innocent and simple. It depends on how well you two know each other. If you want to do something crazier, you can ask Ownage Pranks to do a prank call for you.

Read Next: How To Prank An Ex-Boyfriend One Last Time!