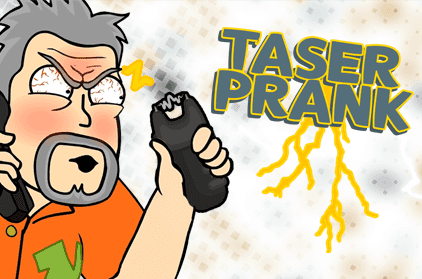 Taser pranks can be a great way to prank your friends and family. But if you're not sure where to start, here's some ideas for taser pranks that are guaranteed to get a good reaction from the recipient. Welcome to Ownage Pranks’ Pranking 101: Taser Prank—your ultimate guide containing taser prank ideas, apps, and toys you can use to have fun, and of course, safe time with your friends and family!

Before we give you the ultimate taser prank guide, let’s talk about tasers. They can be just prank toys with no harm intended, but the real ones are electroshock-equipped weapons that may temporarily impair your target. The first taser was introduced in 1993 as a less-deadly option for the police to use to catch target victims. Since then, at least 49 people have already died after being shocked by it. Taser prank toys, on the other hand, produce relatively less zaps than those produced by police-grade taser guns. Knowing the difference between taser toys and the real thing is really important since you don’t want yourself or your prank victim to be involved in serious injuries, or worse, death. Oh no!

Oops, before we proceed with the ultimate taser prank guide, here are a few things you should consider:

For pranksters, the only thing better than a good ol' joke is telling it. That's because pranks are so much more fun when they're done with style and finesse. But while you might think that all of your hard work will get attention from just about anyone; remember- not everyone has as great of humor or appreciation for jokes like we do here at Ownage Pranks. So make sure to take note of the moods around you before pulling out one over on someone else: Are people already old couch potatoes who can't stand funny faces? Or are there some young prankster types up for something new? This'll help ensure that nobody gets tagged as irresponsible and careless-- especially if their idea was really out of this world!

If you want to maintain a prankster's relationship with anyone, remember that it is best if the first few pranks are small and classic. Testing the waters will tell you what they like before going bigger or more elaborate. It doesn't matter how much of a die-hard practical joker one might be; there's always room for improvement. If they liked the basic practical joke you played on them, then you might want to turn the notch up a little through a taser prank the next time you decide to prank them again!

Get ready to bribe your prank victim

It is important to be prepared when practicing prank joking. Not all victims will take a well-meaning joke kindly, and the consequences can range from minor annoyance to full blown animosity toward you as an individual. If they start getting really mad or despise you for being so clever in my pranks, it's high time you play some damage control by offering them something that would make up for their loss of dignity--like cookies or a tray of lasagna!

Life is tough, and sometimes bad things happen to good people. That's why it's important that when you prank somebody, the timing needs to be perfect - a great time might not come along again soon! For example, if your friend just lost their dog in an accident or something like that happened at work for them today; don't pull any pranks on these types of days because they're going through enough as-is.

Timing is one of the crucial things you should consider when deciding to prank other people: You need patience with yourself so only do this activity during times where everybody involved will have fun and feel free from stress! Talk about how life can bring challenges even though we try hard every day; some days are harder, right?

If no one is available for the taser prank

In any case anyone from the target isn’t available or might have gone out for a little while and you really, REALLY, are in the pranking mood, you can leave all the hard work to an automatic prank call app (can’t go wrong with a classic prank call, eh?)! The way our automatic prank call app works is that it uses advanced AI technology to make it seem like your prank call victim is ACTUALLY talking to a real, live person. Talk about modern day prank ideas, right?

This taser prank that has gone WAY too far

This is one of the reasons why we want you, as a prankster, to know the difference between taser toys and police-grade tasers. A police played a ‘prank’ on Daniel Wilson, a 22-year old Waffle House employee and here is how it went downhill:

“A Waffle House employee is suing the Gwinnett County Police Department over what he says was an unprovoked encounter with an officer who stunned him with a Taser.

The department's internal investigation records reveal that the officer used the weapon like a toy with tacit approval from two superiors.

Daniel Wilson, the 22-year-old waiter, spoke publicly about the encounter at his attorney's office in Snellville.

The incident has already resulted in the arrest of Cpl. Gary Miles, 33, and the resignations of Sgts. Christopher Parry and Joey Parkerson. None of the officers could be reached for comment this week because their phone numbers are unlisted.

Wilson said all three officers were regular customers at the Waffle House at 2725 Grayson Highway in Loganville. He said the restaurant provided the police with free food.

Wilson said the officers often pointed the red laser from their Taser at him playfully. They would do so when Wilson picked a song they didn't like on the jukebox or when telling him not to mess up their order, Wilson said.

"It was uncomfortable, but they are my customers, and they tip pretty well," Wilson said. "I just thought they were being foolish."

Then on Feb. 16, Wilson was chatting with Parry and Parkerson when Miles sidled up behind him. Without saying a word, Miles zapped him with the Taser, Wilson said.

"I remember feeling the pulse go through my body," Wilson said. "It hurt."”
Poor, Daniel, and screw that police officer who used his power to fool somebody innocent like him!

Now, onto some taser prank idea, apps, and toys!

Turn your taser pranking game up a notch through these cheap taser prank toys you can use on your family or friends. Just type in the name of our prank toy suggestions and find the one that you think will make your prank stand out among the rest!

Product description: “For Ages Between 14 through 50/ Not for anyone with medical conditions1 Pc Shocking Gum -Shocking Electric Shock Novelty Bubble Gum Prank Trick”

Transform a camera into a taser

Did you know that you can turn a disposable camera into a taser to prank your family or friends? Alright, here’s what you have to do:

App description: “This app will help you have fun with friends without hurting anyone..

Real stun gun is no good for jokes and pranks :)

Just put the top of your phone to someone and see what happens! ;)”

-Easy to use and very realistic

And that was it for Ownage Pranks’ Pranking 101: Taser Prank! Remember that tasers can be a hilarious and fun way to prank your friends, but there are some risks that you need to take into account. For starters, taser pranks should never hurt the person being zapped or damage property. The idea is for them not to feel pain while they laugh at themselves because someone got them with a harmless weapon. That's where safety comes in!