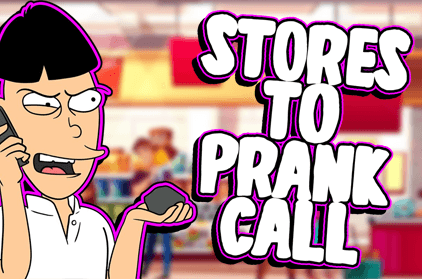 What Are The Best Stores To Prank Call

Aren't we always in the mood for silly practical jokes?

Countless prank calls to the same folks later, and it became apparent that you needed new faces. You probably overestimated how much you needed. If you make prank calls on a regular basis, chances are you've used up all of your personal contacts. Calling random numbers or local companies in the neighborhood is the fastest and easiest way to meet new people. The majority of pranksters like to target well-known brands.

Here's a gentle reminder to refrain from using abusive language to the employees! We're just all trying to survive everyday life. Being kind costs nothing.

Walmart is a corporate giant with around 4,743 U.S stores. It also has branches overseas and is one of the leading companies worldwide. So when we say Walmart is your best bet for a prank call, it is because you probably live within 10 miles of one. You can also switch it up and try other branches in different counties or states. Your entire conversation should be meaningful, so the prank call would be a success.

You can, for example, ask if they are selling walls because their name is Walmart. Expect that employees will hang up on you immediately after that line. Or you can inquire about the price of their basketballs. In response, remark something like, "Wow, your balls are cheap!'

A sample script will be asking staff if they sell pandas since it's what the name suggests. Some employees would immediately get that it's a prank call, and some will keep the conversation calling.

In-N-Out Burger is an American fast food restaurant franchise that predominantly operates in the Southwest and Pacific coast regions of the United States. Some people state that this food chain is somehow overrated, but others say that it is consistently of good quality.

Try to do this funny prank call to them, and ask them how big their buns are! They would probably hang up on you immediately, as fast-food employees don't want to waste time on pranksters!

Mcdonald's is one of the most popular fast-food restaurants worldwide. It is an American fast-food restaurant chain started in 1940 by Richard and Maurice McDonald in San Bernardino, California, United States, and has since grown into a global business. People have different opinions on this restaurant; however, it is undoubtedly the go-to fast food of high school people!

If you are going to prank call the restaurant and try to ask the direction of the nearest Burger King. This is surely a painful sentence to hear. Will this sound rude? You decide!

Is It Illegal To Prank Call Stores?

As children, many of us participated in prank phone calls. As a child, I made a prank phone call to a pizza shop, saying, "Hello! One pizza please!" and then hanging up, thinking it would be enough to get a pizza delivered to me.

Can you get arrested for prank-calling? What you're saying to the person you're pranking can make a difference. Because it is both unwanted and solicited, a prank call is classified as a nuisance call. Silent, butt-dialing and telemarketing calls are all in the same category as prank calls. Since these calls are merely a waste of time, bringing this up in court would be viewed as a weak case because of their obnoxiousness.

Therefore, if you are persistently prank-calling a restaurant or a store, it could be considered harassment which may get you arrested. It's all about what you say and do when you pick up the phone. There is nothing illegal about calling McDonald's and ordering a Whopper over the phone. While it's perfectly legal to order 100 Big Macs and deliver them to a random location, it's deemed a crime because you owe McDonald's money now for ordering.

Other Pranks To Do

Prank-calling stores can cause a major inconvenience to the employees. Their time is precious, so it is rude and disrespectful to play pranks on them. But if you are eager to do pranks, why not do the following pranks?

You can tape the nozzle of a kitchen sink or bathroom faucet with duct tape. Leave a small space in front for someone to stand in. Hide your camera to record your victim's reaction!

Add cake icing, sprinkles, etc., on a round car-washing sponge or piece of craft foam to create a fun cake decoration! Try not to chuckle as the victim tries to cut some cake for themselves. We give this one an A+ for great pranks!

Pants in the Cubicle Prank

In most cases, if you see someone's feet under the stall, you'll just have to wait. Waiting may take a long time in this situation. People will start talking about this guy in no time if you put him in the bathroom. Please don't let this unfortunate, empty outfit end up in the hands of paramedics!

There have been times when I've wished to draw the attention of a room the moment I walk in. You may even get the individual entering to stand up straight with the pranks below! This is one approach to ensure that everyone is awake and ready for a meeting.

A prank call; your phone is enough. To make the flow of the conversation more convincing and lifelike, you'll need a script. For example, phone a friend and tell them that they did something bad, or call them and pretend that you dialed their number by accident while chatting to someone else about them. Try downloading a prank call app if you think you'll stutter while speaking with a pal. From prank call scripts to making the call anonymous, this software from Ownage Pranks provides everything you need for a successful prank call.