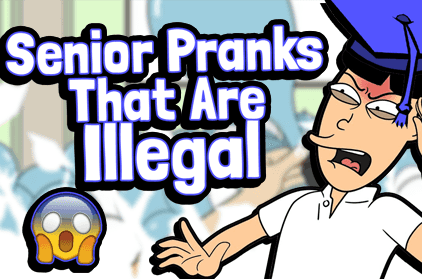 Funny Senior Pranks That Will Get You In Trouble

Even though seniors are taking their last breaths of high school, there's always that day when they get to unleash the funny side and play pranks on each other. There's nothing like a good old-fashioned senior prank to make your final high school semester feel more alive!

What better way to be remembered as graduating class than through the innovative senior pranks you pull on them? These are one-of-kind ideas that will leave people talking for years.

Scroll through this blog and end your last school year with a bang with these senior prank ideas! Good luck, senior class!

Senior Pranks That Went Too Far

Some students really take the "saving the best for last" quote way too seriously, so they go way beyond their limits and causing major trouble. Ready these stories, or take these as a warning!

Students destroyed school property at Riverside-Brookfield High School in Chicago, spray painting filthy slogans and dumping trash around the school grounds. In addition, four live chickens were abandoned in a baby cot outside the school. The school spent $3,500 on cleanup. Pam Bylsma, the principal, described the encounter as "immature, nasty, disrespectful, hateful, and damaging."

A senior from Nature Coast Technical High School in Brooksville, Florida, was barred from attending his high school's commencement after he sent administrators scrambling to hide up the massive wang he'd engraved into the graduation ceremony field. The ceremony was supposed to take place the next day on the football field. Workers sprayed green spray paint to cover the dead grass to conceal the prank.

Alarm clocks were hidden in lockers across a North Carolina school earlier this year after students thought it would be amusing. A bomb scare ensued as the sound of a clock ticking sounded out. Everyone in the building was forced to flee after the police were summoned. Several students were questioned by investigators.

When it comes to their senior pranks, some students feel the urge to make up for their lack of creativity by causing harm. It was not uncommon for kids at Teaneck High School in New Jersey to turn desks upside-down, urinate on them and the hall carpet, apply Vaseline to door handles, and attach raw hot dogs to lockers. It cost the school $3,000 to deal with the 63 children, and they were all arrested for a variety of reasons.

Manure and maple syrup were used to cover the hallways and furniture at Roswell High School in New Mexico was also damaged and the majority of the campus was lined with toilet paper as a prank. The perpetrators were apprehended just a few blocks away from the school. Students were barred from graduation while the debris was cleaned up, and classes were canceled.

The school principal was suspended indefinitely, the school resource officer was sacked, and 100 students were barred from graduating in Monroe County, Tennessee, after a group of kids threw urine and baby oil on the floors, dumped out garbage cans, and released live crickets and chickens. Once inside, the students were escorted by the resource officer. With marbles, pupils set traps for the first students to attend the school.

Harmless Pranks You Should Try

High School Seniors would definitely want to leave their school grounds with a mark; thus, here are some pranks that will make them unforgettable--we hope they won't get behind bars, though!

This is surely one of the most hilarious pranks out there, and here goes: you are going to need a screwdriver. Bring the tool to the school, and then unscrew everything! The thing is you have to unscrew things randomly, you don't have to think about which to unscrew, JUST UNSCREW!

Make sure you don't get caught, or you'll get a trip to the principal's office.

On the front lawn, write out the graduation year. Using plastic forks or cocktail umbrella toothpicks to spell out the year is one method of doing this. You can also use white spray paint if you acquire permission from your school administrators ahead of time. It will fade away after a few mowings.

Take a photo and make sure they include in your yearbook!

This is surely a classic prank! Invite all of the seniors to place their cars in a maze-like pattern in the parking lot. You should consult with your transportation director to ensure that you are not blocking buses or creating a safety issue.

Flash mob it up! Dance and sing together before the graduation ceremony. In order to get everyone on their feet and ready to perform on graduation day, one of the keynote speakers should say a sentence. This may be a lot of fun if you can recruit the help of the janitors, instructors, and even the school secretary.

Prank calls never go out of style because everyone is fooled by them. Prepare your script before calling your target, or use a prank call app you may find online if you don't have the creative capacity to create your own script. All the features you need are included in Ownage Pranks. If you wish to remain anonymous, may I have your phone number? You're in trouble with the software! Do you need some new prank call concepts? Things will be listed for you via the app! You're looking for a prank phone script? Ownage Pranks has it!

Ready To Graduate With A Bang?

There isn't always a clear line between what's okay and what's not for a good high school senior prank, so use your common sense first. Your joke shouldn't hurt anyone or anything alive, cause vandalism or damage, change the school for good, or be illegal. You don't want to be remembered as the class where 60 people went to jail because of a prank.

If you're not sure, ask your teacher before you pull the prank. Most principals like a good senior prank that doesn't hurt anyone as much as you do. Once you know what you can and can't do, it's time to have fun and see what kind of mark your class can make. Good luck with your future endeavors, senior class!