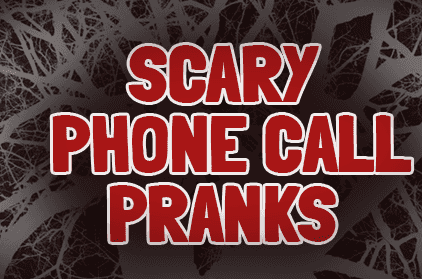 Have you ever watched horror films like The Ring or One Missed Call, where phone calls can literally cause death? It isn't so hard to imagine. There are probably many times when you felt you had similar close encounters.

Maybe you've gone out with friends late at night, only to find out dozens of missed calls from your mom. Or perhaps you have crippling social anxiety where you would rather send a million text messages than make a single phone. In whichever scenario, you probably had at least one phone that sends shivers down your spine.

If regular calls can do this, can you imagine what you can do with a scary prank call? You may out-do yourself just yet.

So What Is A Scary Prank Call?

Scary can mean different things to different people. If you ask people what they think is a scary phone call, one might say bad news while another talks about paranormal encounters. It's difficult to say!

But here at Ownage Pranks, our definition is simple. It doesn't matter what other people think are conventionally scary. The only definition that matters is your target's. A scary prank call should creep them out - nothing that gives them lasting trauma, just enough to get a good scream or two.

So how do you go about scaring people? It can come from something you talk about, like ominous news, creepy facts, or information a stranger shouldn't know. You can also go about it through the delivery - heavy breathing, changing voices, guttural sounds, and cat-like wailing are some examples. You know, all that good horror stuff!

This stuff works great for friends and family that are superstitious. Or anyone that tends to jump to conclusions. Sometimes their minds will fill in the blanks and end up more scared than they should be.

Here are a few of our top picks for prank calls that managed to unsettle those on the other side:

Sometimes those bargain finds are more trouble than they are worth. From angry ghosts to spirit possessions, here are some scary prank ideas for your thrift shopping buddy:

After buying a creepy doll from this one guy, Abdo called him up to let him know that the doll was "possessed." It took a few calls to really get the prank going, but switching between normal old Abdo and a crazed doll-inhabiting demon complete with growls and other creepy sound effects had him completely freaked out and recommending a church. It was very funny!

This prank call was in collaboration with her son, so we had a ton of information to work with. His mom was already convinced that a ghost was haunting her before this prank call happened. All we had to do was to put the elements together.

We had Rakesh pretend to be an astrologer. He calls her and acts as a medium - you know, to reach out to the ghost of "Excalibur," a.k.a Tyrone. She was so convinced she talked to the ghost following her around!

If paranormal phenomenons are not your cup of tea, there is more than one way to scare a person! Let your "rebellious" streak come out with this prank call.

If you want to give your family a good scare, an unexpected pregnancy is one method that usually does the trick. Here we pretend to be Pedro Juarez, the father of Victoria who was seeing Zachary, and we dial up Zachary's mom to deliver some exciting news. Her reaction to being told that she's going to be a "GRANDMOOOOTHERRRR" is very entertaining!

Straight From A Horror Film

These prank calls are from other Youtubers pretending to be scary characters from popular media. There's something terrifying about suddenly encountering horrors in real life that you thought were safely contained behind a screen. But it's also a good chance to prove how unlike you are to the stupid horror movie characters.

In this video, Azzerz brings to life the nightmares everyone had after the movie It came out. He dresses his voice in creepy clown shoes and calls up a bunch of people as Pennywise, the demon clown from It. The ones who requested the prank calls gave him bits of information about the people he was going to prank, like the kind of car they drive or their cat's name. There's nothing scarier than a murderous clown who knows just a little too much about you.

Using voice clips of the satanic deity Molag Bal from The Elder Scrolls video game series, ICEnJAM decided to call a few churches to creep them out. Of course, churches are probably the best equipped to handle paranormal cases, and the religious women who answer the calls don't hesitate to show it. It's really funny to see how exactly they go about trying to dispel demons on the phone.

How You Can Pull Off A Scary Prank Call

Now that you've seen some great, bone-chilling yet hilarious examples, it's your turn to pull off a scary prank call! Here are some tips to get you started:

Let's reach into the mindset of a horror movie ghost. Everyone has something they're afraid of, something that causes discomfort, or something they just don't want to see. If you're trying to prank a loved one that you've known for years, it should be easy enough to identify what makes their heart race.

Bigger fears might be easier to identify. Pull up a list of phobias, and most people might be able to point out one for them. If the person you're trying to prank is reluctant to outright share their weaknesses, you can ask about their opinion on horror movies. Bonus points if they just recently watched one that really gave them a fright.

Some fears are just generally feared by most people. If you're still not sure how to scare your target, you can think about everything you're personally afraid of and pick out the more common ones. It's also hard to go wrong with pretending to be a ghost.

Remember, though, that not all fears are equal. The tiniest fears can still make great ammo for your prank call, but there are some lines that you cannot cross. If you know that your friend is so afraid of ghosts that they get a panic attack whenever they see a flash of white, don't use that to prank them. It's not going to be fun for anybody.

Small fears can be built up to create great pranks, but traumatic fears will just ruin everyone's day. Be careful.

Now that you have knowledge of their fears, take it, and use it against them.

Let's say you've known your friend for years, and you know that they're terrified of snakes. Not terrified enough to faint from seeing one, but scared enough that a hiss, a rattle, or any wiggling thing makes them jump.

There are so many ways you can incorporate it into a prank call. You can make simple hissing noises and pretend that they're coming from their side of the phone. Alternatively, you can say there's a python next to you, and you're being constricted. You can pretend to be a delivery guy and say that you've got a delivery of snakes for them coming tomorrow. All guaranteed ways to make them freak out!

Just lean into their fears—make them do most of the work for you.

Sound effects really elevate your prank, especially if you're going for a scary, paranormal approach. Become a voice actor and Foley artist all in one! With common household items like a metal pan, salt shaker, and a rubber band - you can do a lot! You can also supplement your everyday objects with audio clips online.

If you are worried about getting caught by your friends and family, you can also use free voice soundboards. Ownage Pranks has several characters you can choose from. They can hear 3 to 4 different voices, but the reality is that it is just you!

Read More: How To Disguise Your Voice

This is it! Now you're ready to set up the call. It's always creepier to get a call from a stranger, so try to use a fake phone number or have someone else make the call for you.

Be careful when you dial a stranger, though. You never know if the number you pick might be cursed or belong to paranormal beings. . . unless, of course, you were hoping to be the one ending up scared when planning the prank.

After you've had your fun, try to make sure to let them know that it's a prank by the end so that they don't lose any sleep (or their minds) over the whole thing.

For more prank call ideas, try Ownage Pranks prank call app. There we have dozens of pre-recorded scripts that you can send friends and family at the press of a button! If that isn't enough, you can also request a prank call. With our in-house team, you are sure to make a hilarious call.

Whether your target is the typical scaredy cat or cynical skeptic, these prank calls are sure to run chills down their spine!

Read Next: Here Are The Ultimate Scary Text Prank Ideas