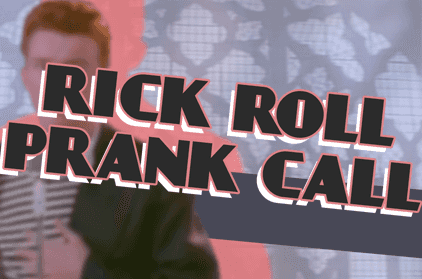 There's nothing like the sweet sound of Rick Astley coming out of your speakers, especially after you’re expecting a very important and life-changing call, right? Whether you're getting prank called for the first time or it's just not your first time having this happen, don't worry. Ownage Pranks has the 411 on how to handle these types of situations so you can finally get your revenge through our Pranking 101: Rick Roll Prank Call ideas!

What is a prank call?

A prank call is a phone call made to someone under false pretenses and with the intent of getting a reaction.

Prank calls can be used as a form of entertainment or as a type of practical joke. Traditionally, telephone pranks are called by someone who does not identify themselves before they make the call, but some telemarketers use them as well. Sometimes victims do not know they are being pranked until the end of the call, when the prankster reveals their identity or purpose.

What could go wrong?

Prank calling is the act of making a prank call to someone. While this might seem like a harmless activity, it can cause serious problems for those who are on the receiving end. Prank calls also often violate the law.

It is popular as a form of entertainment and as a way to get revenge on people. However, these types of calls can be dangerous if they're made to emergency lines or other important numbers. There have been cases where prank calls can cost lives and can also lead to lawsuits for those who take the time and energy to track down the prank caller's identity.

With that, it is always important to practice caution should you decide to execute any kind of prank call.

What is a rick roll?

In the age of the Internet, many people go online for entertainment. Some people have the occasional hunger for knowledge, as well, and occasionally will look up the answer to a question they don't know the answer to. One example of this is webcomics; several webcomics contain an in-story story for every strip, and many of these comic strips are Rick Astley music videos. When people look for comic strips about Rick Astley and/or Rickrolling, they often get to the conclusion that Rickrolling was a real thing, like that time the Yankees played the Red Sox and when the end of the game they watched Rick Astley's music video and then stuff like that happened, which is why some people call it Rickrolling.

The first known instance of the Rickroll prank was in 2007, when it came to prominence on 4chan's /b/ (random) board as a bait-and-switch tactic that involves misleading an audience into clicking on a link that is irrelevant or deceptive. The meme may have originated there; however, the usage of the phrase "rickrolling" predates its association with the joke.

What are Rick Roll prank calls?

What do you get when you combine two of the most popular internet trends, Rick Astley's "Never Gonna Give You Up" and prank calling? The Rick Roll Prank Call. It's one of the simplest pranks out there, but it never fails to make people laugh. But what is a rick roll prank call?

A Rick Roll prank call is the act of calling someone and playing the music video for Rick Astley’s 1987 song, “Never Gonna Give You Up.” The victim is led to believe that they are actually answering a phone call or message from someone else. This type of prank has been around since the early 2000s.

If you’ve ever been tricked into watching a Rick Astley music video, then you know how much of a prank call can throw your day off. It’s hard to shake that feeling of embarrassment and frustration. You know when it happens because it’s the same every time:

You pick up the phone and say hello, and in turn, get responded with "Never gonna give you up," regardless of whether or not you even said anything. This is the basic concept for this prank call tutorial. You will be using fake caller ID to trick your friends and family into talking to Rick Astley.

Here are the things you have to take note of so you can prepare ahead and execute the ultimate rick roll prank call, ever:

Who to do a rick roll prank call?

It is always wise to start by identifying the target and the extent of the prank. It is possible to start with someone you know well, but gradually extend the prank to a celebrity, a relative or even your classmate. Then you would find it difficult to follow the plot as the story might lose the taste it had in the first place. It is even possible for the prank to go wrong as soon as the victim figures out the joke.

Every prank caller has a right to keep any kind of prank call secret, but it is very crucial to decide when it is the right time to prank call. Do not call at an odd hour and call at a very important time of the person’s life.

What are the prank risks to a rick roll prank call?

Knowing the facts about the prank call can give you a lot of control over the situation and avert any threats to your own safety and that of the recipient. It is very important for you to be aware of what will happen if you fail to read the situation correctly. If you have no clue about what might happen, you should probably leave it for somebody else.

It is safe to assume that someone who receives a prank call from you does not take you seriously. In fact, most prank calls are simply attempts to annoy people. As a result, they get off the phone as soon as possible. If the prank call doesn’t go as planned, people who receive it could be angry and hurt. They may not think that it is appropriate to be rude and share that with you.

How do I do a rick roll prank call?

First off, you should familiarize yourself with the official music video for Never Gonna Give You Up that has already garnered more than 1 billion views on YouTube. This is the foundation of all rick roll pranks out there so it’s best that you acquaint yourself with it.

Second, you should hide your identity. You can do this by buying a burner phone or an extra sim card but we wouldn’t want you to go through the effort and actually spend money just because of a prank, right? Thankfully, Ownage Pranks has a spoof call app that lets you do prank calls in a different caller ID. You can download it right now for FREE!

Second, decide on how you would execute the prank itself. Are you going to do a lyric prank call? If that’s the case, you might want to use the song’s most famous verse Never gonna give you up / Never gonna let you down / Never gonna run around and desert you / Never gonna make you cry / Never gonna say goodbye / Never gonna tell a lie and hurt you so you’re sure to make your target victim laugh.

Playing Never Gonna Give You Up Once Your Victim Picks Up

Another prank idea you could do is possibly one of the simplest prank ideas out there. All you have to do is play the song once your target victim picks up the phone. What’s fun about this prank idea is your victim will surely be confused with what’s happening on your end!

And that was it for Ownage Pranks’ freshest installment of its Pranking 101 series. We hope you enjoyed going through this rick roll prank call tutorial as much as we did making them. If you did, make sure you share this to all of your prankster friends out there!