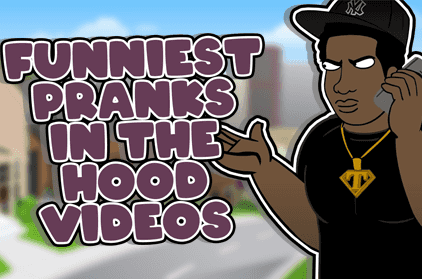 Funniest Pranks in the Hood Videos

We all know this by now: Pranking is not limited to April Fools’ Day!

You are not required to humiliate someone outright. If you can, sprinkle in a bit of drama or irony. You could even pretend to be an old flame or a new boss. It goes without saying that superb stagecraft is an essential component of every successful practical joke. However, it also necessitates a strong sense of empathy.

To prank someone is to play a practical joke or a malicious trick on them for the purpose of amusing oneself. In the online world, pranking is often related to trolling, and prank videos are widely spread on video-sharing websites like YouTube. Prank videos have long been a popular notion on the YouTube platform.

Certain YouTubers have devoted their entire online presence to the creation of such content, earning astronomical sums in the process. This subgenre of YouTube channels exploded in popularity in the early 2000s and hasn't really declined in popularity since. According to Tubular Labs, the total number of views on prank videos in 2015 was 17.7 billion. Because they are brief, emotive, and universally relatable, these videos are more likely to be shared and go viral.

The popularity of Internet pranks has made them a part of mainstream culture that has occasionally spilled over into the real world.

Pranking videos had a promising start. There were some who gave money to the poor. Others had attractive women with whom they engaged in sexual activity. Recently, it appears as though Vine compilations and prank videos have taken over YouTube traffic. However, while one focuses on twerking and humor, the other places young guys (and a few women) in really amusing situations with strangers.

In contrast, the latest craze in prank videos is young white men traveling into black areas and putting themselves in absurd circumstances.

If you’re bored, cooped up, or just want to smile, check out these funny pranks in the hood videos for the whole fam!

Uploaded in September 2017 with now 6,207,935 views, this prank compilation from Comedy Wolf demonstrates a dude trying to provoke passersby through offensive language or annoying gestures.

It's practically funny when you see how he was handled by his 'victims'. Since this is a compilation, you’’ get to see more pranks as you watch!

Funny Pranks In The Hood GONE WRONG 2019 by Comedy Wolf

Another ComedyWolf prank compilation, this video was uploaded in July 2018 with currently 2,678,431 views.

The first prank is to try to buy weed in the neighborhood and then proceed to pretend to call the police once his 'victims' decide to let him purchase. Succeeding pranks varied but still with the same intent, to provoke and try to upset the ‘victims’ and proceeds to reveal it is all a prank before things get heated.

Don't Tell Me What to Do Prank in the Hood! (BEST PRANK) by TopNotch Idiots

Uploaded by TopNotch Idiots in June 2020 with now 1,812,206 views, you get to enjoy a high-quality video prank compilation in the hood!

This features a prank of asking strangers for directions, and when they do (they almost always do), the prankster will answer and tell them the magic words "Don't tell me what to do".

You Wanna BOX in the Hood Prank! (GONE WRONG) by TopNotch Idiots

Another TopNotch Idiots video was uploaded in January this year with 904,234 views, and this prank features the prankster (complete with the boxing outfit!) roaming around the streets and asking strangers if they box wanna box. It turns out, later on, the prankster will reveal a literal box and offer it to the stranger. Sike!

Get to enjoy yet another high-quality prank compilation in the hood.

Brawl in the Hood (Caught on Tape) by Ownage Pranks

The prankster holds a ton of info about the 'victim' supplied by the victim's cousin (who requested the prank). A word of warning though, you have to be age-appropriate to view this one.

Click the link and get to see an elaborate prank in action!

We hope you enjoyed the prank video recommendations above.

Suppose you feel like you want to do pranks like the ones above. You might want to rethink it, especially if you are not yet in the legal age! We recommend that you opt for pranks that offer a lesser chance of adverse effect to you, the victim of the prank, and the potential witnesses of the prank itself.

Indeed, there are times when we've all been so bored that we just want to mess with someone else's life, even if it means making a prank call. Knowing what to say is, by far, the most difficult portion of the phone call. There's no need to look any further.

We suggest you try and download our spoof call app for a more fun and reliable pranking experience!