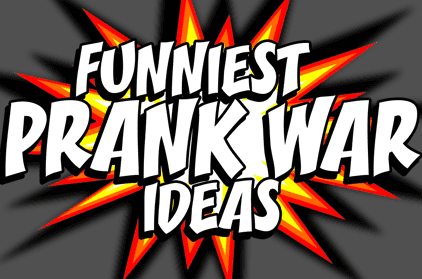 Prank wars can be a lot of fun. You and your friends get to laugh at each other’s expense for a good joke. But sometimes, we can get stuck in a routine and it becomes hard to come up with new ideas for tricks that will really get your friend’s attention.

If you’re the kind of person who thinks it’s always fun to get other people, and maybe even yourself, in on a joke, then you’ll want to read this article. It will give you some great prank war ideas that aren’t too mean or expensive. You can prank your friends with fake text messages from their boss, or by leaving a snake in their bed. You can even convince them that they need to go to the emergency room if they eat an oyster because it was an undercooked oyster. But before you start laughing at their misfortune, make sure you have a camera ready because they will surely be getting back at you. Make sure you read until the end for the greatest prank war ideas because it’s game time, for sure!

How to Trick Your Friends

When you’re in the middle of a prank war, it can be hard to think of new ideas. It’s important to switch things up so your friends don’t get too complacent or get too used to your tricks. One way to get creative is to think of the things that bother your friends the most.

It’s always best to stay true to your friend’s personality. For example, if you know your friend is obsessed with their dog, then you can send them a photo of their dog that has been edited to look like it’s being taken away by animal control. This may seem mean, but it’s something that will definitely get your friend’s attention.

It’s also important to make sure you are respectful in your pranks. You don’t want to do anything that will hurt or offend your friend. For example, if your friend is religious, then you shouldn’t prank them with something that would seem offensive. You get the gist.

Put together a fake dating profile for your friend, and make them believe they’ve been contacted by someone who has a very similar personality to their own.

Another idea is to take a photo of a friend and put it on a popular dating app or some other online service where they might find it. They won’t have any idea that you’ve done it and they’ll get a good laugh when they get the notification on the app.

If you want to play a prank on your friends, try sending them a fake text message from their boss, a teacher, a doctor, a police officer, or whoever they might be afraid of. You can tell them that they need to show up for work or go to school or meet with the doctor immediately.

Then all you have to do is watch the reaction when they get the text. If they’re not expecting it at all, they should be pretty scared! The best part is that this prank is really cheap and easy to do. All you have to do is get a phone number from them and send the text message.

Another fun way to prank someone is by sending them a message that their boss or teacher wants to talk to them. If you want to really get them good, send them a message like this: "I need you to stop by my office before school starts." While they're freaking out and trying to figure out what they did wrong, you can sit back and laugh - or not. That's up to you.

Or if you’re too impatient to wait for their response, you can always rely on a trusted prank call! Sure, you can buy a burner phone or an extra sim card for your prank call to be successful, but you wouldn’t want to put yourself in THAT much trouble, right? Thankfully, Ownage Pranks has its spoof call app that does all of those without having to spend a buck. Just download the app and you’re good to go!

Fake emails are a really good idea if you want to prank your friends. You can make them look like they’ve won the lottery, or they’ve been nominated for an award for their work.

There are so many things you can do with fake emails, and it’s always better when you set it up in advance. For example, you could tell your friend that they just won the lottery, then send them an email that looks like they just won $1 million in the lottery. You could also set the email to automatically show up in their inbox when they open their inbox.

One of the best prank ideas is the home invasion. It’s easy to do, and if you do it right, it will be terrifying. You can invade your friend’s home when they are asleep with a whole group of people. Put on masks, grab some scary-looking weapons, and wake them up in the middle of the night. It will be difficult for them to believe that it’s not real, especially if they are terrified by horror movies.

Have you ever put an oyster in your mouth without knowing how to tell if it’s cooked? You might not have to worry about that if you always cook your oysters, but what if someone tricked you into eating one that was still raw?

If someone tricked you and made you eat an undercooked oyster, you could use this prank as a way to convince them that you need to go to the emergency room. You could start by telling them that you might have food poisoning and that you need to go to the hospital. They’ll probably refuse and tell you they’re 100% sure you aren’t going to the emergency room. But just as they start to feel confident that you’re totally okay, pretend that you want to vomit or that your body is starting to itch. Be creative and engaging!

Hey, you’ve got a great idea for a prank! This one is going to be the best one yet!

You can replace your friends’ toothpaste with, let’s say, mayonnaise. They’ll put it on their toothbrush and then it will be all over their mouth. You can also do this with ketchup or mustard.

But if you want to get really creative with it, you could do it with a different flavor of toothpaste. If they’re a mint toothpaste kind of person, you can replace their toothpaste with something blueberry flavor.

When they go to brush their teeth the next morning, they will have a funny taste in their mouth. They might even notice the difference in the way it foams. And just as they start to wonder what happened, you can walk up behind them and say “The prank war is on!”

In conclusion, there are a ton of creative and funny prank ideas to try out with your friends but the best prank war idea is the one you come up with. It doesn’t matter how lame or simple it is - as long as your friends and family get a good laugh out of it, it’s worth it. So get creative and have some fun!