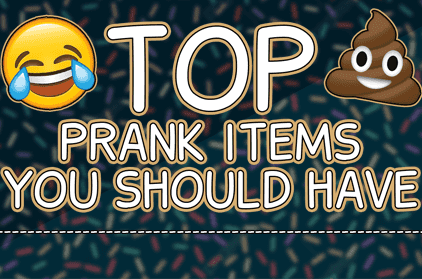 8 Prank Items That Are The Best For Your Next Prank

Pranks are an age-old tradition. They've been around since the beginning of time, and they're still very popular today. But it can be hard to come up with the perfect prank without being too naughty or too nice. And that's where pranking supplies come in! You can find just about anything online that will help you pull off the perfect prank.

Pranks can be a lot of fun. But what if you want to prank your friend but don’t know what to do? Whether you want to do a good old-fashioned spitball or try something more new and trendy, this list has it all. From fart machines to fake dog poop, here are 8 hilarious prank items you can buy online.

Pranking supplies can be found online in a wide variety of categories. Browse around and see what's available for your preferred humor!

Whoopee cushions are a traditional prank item. Find a very public place like an office desk and place it on the chair. Find a victim and when they sit in the chair and it makes a noise, take a picture, and post it to your social media.

It isn’t technically an item but a prank call app is something you might want to keep with you at all times just in case a dull situation calls for a pranking session. Ownage Pranks has its spoof call app that lets you hide your identity without having the need to buy a burner phone or an extra sim card. Go ahead and download it to your smartphone right away!

The fake dog poop is a great prank item because it can be used in a variety of ways. You can take advantage of the unsuspecting person that steps in it, or you can play a prank on someone that doesn’t have a dog. It’s a great toy to have around for when the opportunity arises.

If you want to prank someone you know, this is one of the best pranks you can try. You can even get creative with it. The fake dog poop might not sound too funny to some people, but it will seem hilarious to others. So if you want to prank your friend, this is the perfect way to do it.

And if you're feeling up to it, you can even buy fake dog poop scented like a real dog's feces. It's guaranteed to make your victim gag and wonder why anyone would want to smell like that. But if they're really asking for it, then you know what to give them.

If you want to pull a prank on a mouse-inclined friend, this is the way to do it! Fake mouse droppings are a goofy and gross way to scare your friends who may have a phobia of rodents.

Glitter bombs are a great prank for your office. They are really easy to make, and the results are worth it. All you need for this prank is a container of glitter, a balloon, tape or glue, and scissors. Start by filling the balloon with the glitter, then cut the balloon so that it pops open when your victim opens it.

Glitter bombs are perfect for an office prank because they are both harmless and annoying. They will have everyone in your office asking “What’s the deal with all the glitter?” and they will never know who to blame. If you want to get revenge on someone at work, this is a great way to do it. They won’t know who did it, and they will spend all day cleaning up the mess.

One of the best prank items is fake spiders. Why? Spiders are some of the most feared creatures on the planet. They’re creepy, crawly, and they can get into your bed. So get your hands on some fake spiders and get your prank on.

They also are a classic prank because they're universally hated. Plus, it's a great way to make someone feel a little uneasy. You can find a bag of 100 spiders for about $10 online. It's a small investment for a big payoff. Add some plastic spiders to some unsuspecting person's home and they'll be terrified when they see them!

Fake blood is a staple of the pranking world. It looks so real, but it's just a harmless joke. Fake blood can be used for a variety of pranks, from writing "blood" on your friends' hands to spattering it all over the floor. You can find fake blood in a tube or in a spray can.

Different formulas will produce different colors and consistencies, so you'll want to think about what you're using it for when choosing a formula. For most prank purposes, the red-colored fake blood is the most popular. Also, the best part about buying fake blood online is that it's cheap! You can find large bottles for around $10, which will last you a long time.

When you actually need to get rid of cockroaches, you should try this fake cockroach bait. It's an eco-friendly, non-toxic, cheap alternative to other chemical-containing roach products. What's the best part about these fake roaches? They can be used as a gag or prank! If you hide these fake cockroaches in someone's house, they'll never know they're not the real thing.

You can be as creative as you want with this prank. Whether you place them under the sink, in the pantry, or even in someone's bed, they're bound to scare the crap out of your victim.

So, there you have it: 8 prank items that are the best for your next prank. If you want to prank your friend, check out this list and choose something that will work best for you. Have fun!