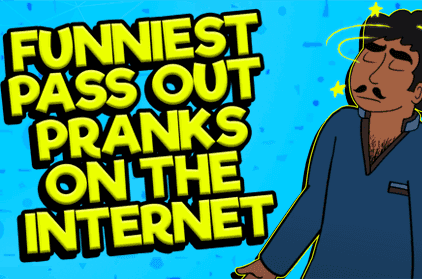 Funniest Pass Out Pranks on the Internet

The internet has many pass-out pranks that you may try on your friends the next time you catch them off guard (or literally, pass out). Other pranksters have done this prank on their husbands, boyfriends, and parents!

Here’s how to do it:

Tell your friends that you aren’t feeling well.

A great prankster prepares their stage. It is essential to introduce the scene slowly.

Fainting can be preceded by a variety of symptoms, such as extreme heat, nausea, dizziness, or lightheadedness, as well as hyperventilation. People may also feel faint or weak, and their ears may vibrate or lose their ability to hear for a short time. For someone who faints for no reason, these symptoms are typical.

Aside from considering the health condition of your prank victim, you have to know how to paint on any surface safely. In addition, you mustn’t injure yourself! If you're scared that your fall will look staged, you can always fall backward onto someone who will catch you. The speed at which you drop will influence whether or not your faint appears genuine. When you're falling, keep your head down and don't glance behind you.

Find the perfect time to pull the pass out prank.

For your fake fainting episode to go as smoothly as possible and achieve the desired outcome, you'll need to plan it out thoroughly. Then, based on your motivations, it's up to you to decide where you want to fake faint.

You may be able to influence the timing of it a little more. However, it would be best if you exercised considerable caution to avoid injuring yourself or causing unwanted effects. For example, you don’t want to fake a faint on an undesirable landing surface! Eek!

Other pranksters initiate a heated argument with their victim and then pass out in the middle of the fight. Noice!

Stay unconscious for a few seconds.

Remember not to spoil your prank too soon! First, let your friends and family process the scene. You might hear some laugh-worthy words that they would say out of panic. Next, close your eyes and lie still on the ground. You don't have to be entirely still while you are lying down. There are times when the limbs of an unconscious person move, and they have no control over them. Finally, maintain a good poker face. Hold back your laughter until it’s time to reveal that it’s all a prank.

Have a good laugh

After you decide to reveal your prank, it might be best if you immediately open your eyes and shout boo! to surprise them (once again!). Then, when you wish to drag it a bit more, you sit up slowly and ask those around you to help you up. Then, take your time getting back to your regular self. Finally, put your hands on the ground and rest your head on your knees. After this, this may be the time to tell them it's all a prank.

Share the laughter among the group as they try to process what happened.

If you're not up for the challenge of the pass out prank, you can always rely on our prank calling app (because there is no such thing as a lousy prank call, right?)! Our prank call app uses superior artificial intelligence technologies to fool your prank call victim into thinking they're talking to a live person. Don't miss out on any of the exciting stuff, so get your own now!