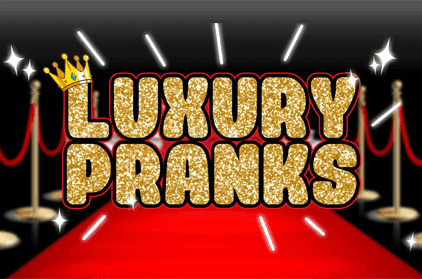 Luxury Pranks, or Parker Hajiaskari, is a Youtube from the United States. He is known for his YouTube videos, including pranks, practical jokes, reactions, and video diaries. In 2008, he began posting humorous films on YouTube. In 2015, Parker launched his YouTube channel, 'LuxuryPranks,' which quickly became a sensation. A staggering two million subscribers and more than 203 million views later, he now has immense popularity in the Youtube industry. Harmless prankster videos involving the general population were initially featured on the channel. In the end, Parker's films became more like reality TV, in which he claimed to expose real-life instances of catfishing, infidelity, stalking, and gold-digging.

Learn more from this blog about Luxury Pranks, and get more prank ideas below!

This video is a social experiment where Parker talked to different people to sign them up for weird clubs. According to his caption, "Most people just signed up to be nice, in my opinion."

The guys chose a traffic guy as a victim. They pretended to have an invisible car. The guy in gray pretended to be parking a vehicle that only he could see. The guy directing traffic in that parking lot even asked what he was doing, that he saw no car. The guy asked him to leave, but he gave him a 50. Watch this video to know how funnier it gets!

The goal digger prank has 18 parts! The video received many good comments saying that the trick went well. In the video, there are two cars parked; one is Mercedes. We mean, who wouldn't wanna ride a Mercedes? This guy asked this girl to go with him and show him around since he's new to the area. You might want to watch how things went!

What happened in this prank is that Parker pretended to be a magician. If you're gonna watch the video, you'd feel the embarrassment through your screen. You can feel how awkward the situation is. Watch the video yourself, so you'd know!

Luckily, the people are nice to patiently wait for him to do the tricks!

An elderly woman who has been catfished for the past 15 years is the subject of this video. For the past decade and a half, Joe and Parker have been trying to find out who this elderly, poor woman has been transferring money to. When they face individual accountability, see what occurs.

In this video, they investigated this girl who has been speaking with a guy named Henry, whom she met through Tinder, an online dating app. This is a 12-minute video where they ask Claire (the girl) questions. Claire said that Henry doesn't seem real since he's been selling her stuff online! Is Henry really a robot?! Find out now!

It's been circulating on Reddit that Luxury Pranks has created fake content. Let's see what these Redditors have to say regarding this matter.

"luxurypranks on it is so obviously fake. major cringe alert!" - veganhoe

"It's so obviously fake, yet apparently there are 5 people on the planet who can tell. Why the hell do they have 500k subs?" - TheCockatoo

"I think they're fake too; I actually wrote a post on the YT subreddit about it. But the thing is, even though I know they're fake, they're still entertaining. I can't help but laugh and enjoy the increasingly gimmicky and stupid predators. It's like watching a TV show; you know none of it's real but you still get a kick from the staged drama.

Also, just a side point; in the episode about the police officer predator... Parker is wearing a hoodie with the words "FAKE" on it. He's just mocking his audience at this point..." - ShiningConcepts

These videos may or may not be real; however, let's get to the fun side! Why don't you try other pranks you can try on your friends and just have fun? These Luxury Pranks videos and reviews from Reddit may drain your energy. Try these pranks listed below:

Spend the money to purchase a second matching or dual remote. Change networks while they are viewing. The secret to this prank is to not misuse it. If you take it in modest doses, you can carry this one on for months not just on April Fools Day.

Prank calling has always been gold! This classic prank never gets old, it just evolves. So, you're going to think of a scenario you would use during a prank call with your friend. Make sure to memorize your script, and don't stutter! However, if you're hesitant that you can pull this off, you can download a prank call app anytime! This app from Ownage Pranks has it all; you don't need anything but your phone. This gives you access to different prank call scripts and has the feature to make your calls anonymous.

The best way to keep your friend's shampoo bottle or deodorant bottle closed is to put glue on the cap so it can't be opened. Make sure it's the only bottle in the bathroom!

Using the screen rotation hotkeys is a simple but always amusing prank. Ctrl-Alt-Up or Ctrl-Alt-Down can be used to change the direction of the monitor. Go into the Control Panel and adjust their mouse to be left-handed if you have some spare time.

What is this Juice?!

A few drops of food coloring can transform water into juice or Kool-Aid by adding a few drops to the mixture. Pour it into an empty juice container and place it in the refrigerator for a delayed response. Bring along glasses of your "juice" and offer to buy everyone something to drink. Watch your victim's reactions as they get their first sip of this juice!

Now that you’ve read this mini list of pranks, make sure to keep your pranks safe and harmless. After all, we just want to have fun!