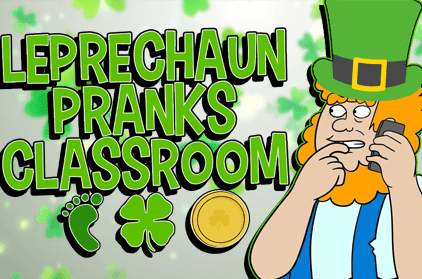 Pull Off Leprechaun Pranks In The Classroom

As St. Patrick's Day approaches, we've had an unusual guest in our home for a number of years. A mischievous leprechaun plays tricks on us, but he always leaves us with a few sweets as a thank you.

Create an unforgettable St. Patrick's Day experience for children by pulling a leprechaun prank on them. There are ten fun and creative ways to celebrate the holiday season at home or at school.

Here are some funny Leprechaun Traps and pranks you can do!

Every year on March 17, St. Patrick's Day is observed to commemorate his death in the fifth century. The Irish have celebrated a holy event, St. Patrick's Day, for the past 1,000 years. It was customary for Irish families to go to church in the morning and celebrate St. Patrick's Day in the afternoon during Lent. Traditional Irish bacon and cabbage dinners were allowed to be served during the Lenten season so that everyone could enjoy the festivities.

Who Was St. Patrick?

Saint Patrick is Ireland's patron saint and national apostle. At 16, he was kidnapped from Roman Britain and taken to Ireland as a slave. Later, he escaped and brought Christianity to Ireland. In the centuries after Patrick's death (believed to be on March 17, 461), the mythology surrounding his life became ingrained in Irish culture. Perhaps the most famous legend is that he explained the Holy Trinity (Father, Son, and Holy Spirit) using the three leaves of a native Irish clover, the shamrock.

What Do Leprechauns Have To Do With St. Patrick's Day?

The Leprechaun is one of the symbols of this Irish holiday. In Ireland, these folkloric figures were initially known as "lobaircin," which means "small-bodied fellow." Fairies, little men and women who might utilize their magical powers for good or evil, may have inspired the idea of leprechauns. According to Celtic legend, leprechauns were grumpy creatures who fixed the other fairies' shoes.

It's no secret that leprechauns are mischievous little blighters who enjoy pulling pranks on people. Try these fun Leprechaun tricks to jazz up the holiday!

You can spot Leprechauns anywhere, including the inside of your shoes! When it's time for them to leave the house, stuff a few cold chocolate golden coins (plastic) inside their shoes.

These backward leprechaun notes from A Little Lair or Busy Bees can be printed and placed in front of the mirror for kids to decode. Alternatively, you can use green dry erase marker to leave a festive greeting.

With green crepe paper and green shamrocks, that trouble-making Leprechaun may try to block the children's bedroom doors. While the kids are fast asleep the night before St. Patrick's Day, whip together this simple project. Add a few green or gold balloons for a little extra pizazz.

Add some green food coloring to a gallon or a glass of milk for a morning surprise: this is a classic and incredibly simple leprechaun trick. For the ultimate St. Patrick's Day breakfast plate, serve it with a bowl of Lucky Charms.

Oreo cookies can be painted gold with edible spray paint to look like gold coins or shillings. These can be used with the rainbow of streamers' ideas.

This is a rainbow constructed out of streamers by Natalie Menke. Leave a treat for the youngsters at the end of the rainbow (such as gold Oreos or chocolate golden coins) to celebrate the journey.

If you are in a classroom setting, tell your students they are going to have nap time. While they are asleep, sneak everyone a temporary tattoo on their arms or legs. They'll see how the leprechaun mischief can get when they wake up!

This is a lot of fun, and it takes the traditional "toilet water green" trick to a whole new level. Just buy a few colored fizzy bath tablets online, and you'll be set. To avoid a stain, do not use Easter egg coloring tablets! Learn how to make your kids' faces light up when you turn the water in your kitchen faucet green.

We don't want to see this sneaky Leprechaun fly away that easily! Here are some tricks and traps to lure and entice this naughty Leprechaun.

And, maybe you could complete St. Patrick's Day by doing a prank call? Sure, prank call is old, yet it remains classic! Why not call your victims (your targets must be kids, adults won't fall for this one) and tell them that you are Leprechaun or saw the naught fairy escape? You can also try some other scripts that you can pull off on adults! If you can't think of anything, you can just download a prank call app and do the stunt! You don't have to do any work to use the app! Do you need a prank phone call script? At Ownage Pranks, we have it!