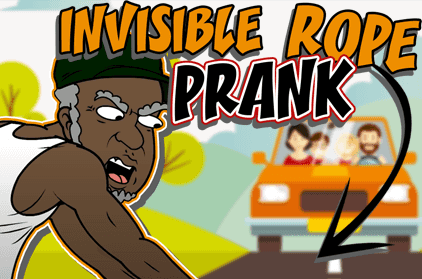 Invisible Rope Pranks That Will Surely Make You Laugh

This awesome prank will surely make everyone laugh like a seal. The concept of this invisible rope prank is when two people pretend to be holding a rope in their hands and pull it over a road--making cars push on the brake pedal suddenly! You can imagine your victims' reactions; make sure to record the prank!

You will surely enjoy this prank with your friend; however, it would be best to do this with caution as we don't want to cause damage to the prank victims. We don't want a crash-causing prank; we want to have fun!

We've gathered videos from Youtube and other social media platforms performing this invisible rope prank on other people. Continue reading the blog to get an idea of how to do this prank properly and perfectly.

Kids Pulling off the Invisible Prank

This video from America's Funniest Home Videos Facebook Page shows how fun and entertained these kids were while pulling off this classic prank.

As you can see, they managed to perform the prank perfectly on the blue car. Sure, the number one requirement of this prank is that you should be good at acting! Watch the video and hear the one recording die from laughing!

On the other side of the internet, we spotted this video from MadeMyDay Youtube channel, where two guys are performing this hilarious prank. These guys did it on different roads and still managed to make every car stop!

At 1:04, they pranked this biker guy, and you know they pulled the prank perfectly because the biker dodged the invisible rope by going outside the road! He even biked his way out through the grass. It's a success, we guess?

This one is a 3-minute long prank video; however, it's a guarantee that you'll never notice that you've been watching a 3-minute video! Watch Ricky and Nick perform the invisible rope prank.

Funny how these kids get to prank each car passing successfully. Every car stopped! They even pretended to hold the invisible rope up and let the car pass. Are they actors?! At 2:57, they acted like they were having difficulty holding the rope since the car started moving forward slowly. Again, are they actors?!

Let's take a look at this invisible rope prank from a Youtuber, Tangy Sharma. What's funnier about this video is that they even took a selfie with the car on their first attempt!

At 1:03, the car owner even went out of his car to see the situation--and then his car was almost robbed! Every car stopped, which means the prank was a success! At 1:54, they caused traffic! They've been stopping three vehicles from moving. The white car owner also went out and checked if there was a real rope out there! While at 2:27, the guy even took a big step to avoid the rope. What a success!

This video from Youtube is just 1-minute long, but it's so amusing! The two guys managed to pull the prank perfectly. We believe they are actors in their past life!

At 0:33, they tied the invisible rope to the pole and ran away, making their victim step out of his car. The guy checked if there was really a rope and then continued driving forward. At 1:10, their victim is this biker guy! Maybe it's a success because he did not drive towards the invisible rope but instead biked his way out through the grass on the side.

This video from the Youtube channel PrankBuzz is 5-minute long, but guess what--you'll enjoy every second of it! This video is a bit different from those above, as the two pranksters pretended to be tripping over an invisible rope.

You'll know it's a success because even on their first attempt (which starts at 0:49), they made the owner step out of his car to check the invisible rope! While at 1:22, they made their second victim believe that they were stumbling over something! Their victim stopped and went to walk on the sides. This means, a successful prank?! These guys are undoubtedly actors!

Do The Invisible Rope Prank

Now, after watching these videos above, it's your turn to do the trick! However, we're here to warn you that accidents can occur due to this prank because it requires cars and/or other vehicles to come to a stop, which can lead to both minor and major injuries. Insurance companies and the police and/or law enforcement may have to be involved in both cases.

Nonetheless, if you promise to do this prank with caution, follow the steps below and make sure to record the whole stunt so you can have something fun to look back at:

Get a friend you are going to do this prank with. This prank is impossible to be a success if you're just alone. This needs two people to hold the invisible rope.

You and your friend should stand on the opposite sides of the street. And when you see a car coming, act like you are both pulling a rope.

Next, wait for your victim to step out of their car, or you can pretend to be holding the invisible rope up so you can let the car pass. This step is on you! Take note, you'll know that it's a success if you made the car stop! It's just a bonus if the victim went out to check the invisible rope.

Since this prank may sometime cause an accident if you are not careful enough, you can try another classic prank which is prank calling! Prank calling does not require you anything but a phone! It would be best to prepare a script you will follow throughout the prank, or you can just download a prank call app with everything you need! From prank calling scripts to keep you anonymous, Ownage Pranks got you covered!