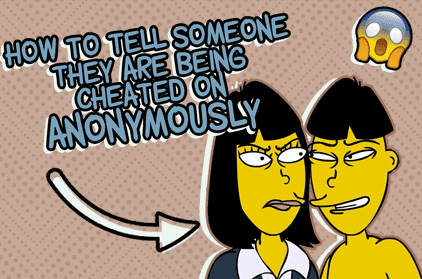 How to Tell Someone They Are Being Cheated on Anonymously

Whether it is your friend, sibling, or just any random person you are looking out for, it is not always easy to reveal a hard truth about infidelity, especially with all the unpleasant details you will have to unveil. Relationship issues are a sensitive topic that people don’t talk about often. It is also not an easy thing to accept especially if you think you are having a good, stable, and long-term relationship; then everything turns out to be something different. Even with the best intentions on your end, you won’t always be assured that the person being cheated on will take the news. Sometimes the cheater could harm and blame you too. Sometimes, people will even try to discredit the truth that you just want to put out.

See? It’s not always easy. Sometimes doing the right thing can be a threat to your very safety, credibility, or even status. Numerous scenarios could come out of telling someone they are being cheated on and these are just some of the most common:

The Risks of Telling:

1. The person being cheated on won’t handle it properly.

When people are in love, they tend to see through rose-colored glasses. As Wanda Pierce said in Bojack Horseman Season 2, “When you look at someone through rose-colored glasses, all the red flags just look like flags.” Meaning? People sometimes don’t see the wrong things and disrespect, even if a piece of concrete evidence exists, their partner when they are in love. What may be seen as an endearing trait may actually be toxic. This is common in relationships. That’s why when you break the news as fragile as this, the person being cheated on may not be able to handle it healthily. This is just a broad picture painting of a more significant scenario. But the bottom line is, you can always spare yourself from the reactions of the one being cheated on. They may discredit, harm, or even threaten you. But if you are sending an anonymous email, you can spare yourself from all this hassle.

2. You can be harmed by the cheater.

Cheating is already a bad thing in itself; what makes you think that the cheater isn’t capable of more horrendous things? Sometimes cheaters show their true colors when they get caught. Liars can’t permanently hide forever. In worst cases, they threaten anyone who doesn’t tolerate their toxicity. Sometimes it leads to physical or verbal assault. Even though we all know that’s punishable by law, it’s better to prevent it from happening early on. While telling the truth is always the right thing to do, protecting yourself from harm is necessary, so it is essential never to use your personal email when dealing with this situation.

3. It could be taken as a personal attack.

When you don’t anonymously tell someone that they are being cheated on, they can use this as an opportunity to take it as a personal attack. If that happens, remind them that you have no malicious intent and you are just looking after them. If you are a friend that’s always been telling them that their significant other is bad news, they might think this is just a way for you to prove your point even further. Sometimes it may appear that you don’t want them to be happy. They might call you insecure. The possibilities are endless! Who knows what else? You can prevent this by keeping the sender of the message discreet. Never disclose your personal details! Just let your action stand for what it is and not be tied to your personality.

Monogamous relationships are a lot of drama, whether you like it or not. There are just too many emotions (and hormones) involved, and it’s kind of tricky to get stuck in the middle! Some couples like involving other people in their problems, and you can’t really blame them for it, especially if you have actively included yourself in the narrative. But you don’t always have to deal with that! When you do it through an anonymous letter, there is little to no chance for them to follow up on your news. You won't have to deal with complicated details because you kept your real identity hidden; there's no way for them to ask you and bring you to the drama! It stands just the way it is. All you can do is watch them work on this problem from afar, stress-free.

Now that you know the harm that it could cause you, hopefully, it’s a lot clearer now why you should stay anonymous in delivering this kind of news. It’s better to be safe than sorry! Now, if you are still toying with the idea of whether or not you should step in, hopefully, these three markers will help you decide.

When should you step in?

1. When it is already causing harm.

Suppose you know the person being cheated on, and you see that the cheating has affected them without them noticing. In that case, it’s just your proper duty (or kick on the conscience) to do something about it! There are multiple ways this can cause harm, including paranoia, feeling gaslighted, practical inconveniences, etc. No one deserves to be fooled!

Aside from inherent harms caused, sometimes there is no way for someone to tell they are being cheated on–mainly because almost every innocent partner is being manipulated or guilt-tripped. Most especially if their cheating partner is a slick liar. They would go out of their way to cheat on their partner–such as using a temporary phone, making a new email address, and more to communicate with their affair partner! What makes you think they can’t make little to more significant lies just to cover their tracks? If you’re the only one who can tell it, don’t think twice and do it already! You won’t be harmed anyway, so what’s so bad about doing a good deed?

3. When you value the truth above many things.

When the truth is one of your core values as a person, then you won’t need further pep talks from a random internet article telling you to do it already! You value truth? Then go tell it! But do it without disclosing your personal identity as it may cause you harm.

If you are now convinced to stand by the truth and tell someone that they are being cheated on, read on to find out 5 careful ideas to do so!

How To Tell Someone They Are Being Cheated On ANONYMOUSLY:

With the help of your local post offices, you can always make an anonymous tip by mailing it to them. Better if you send it somewhere their cheating partner won’t ever see. Like in their office, apartment, or even just their parent’s house (if you have the address.) Make sure to write the mail in type-written or printed paper to avoid tracing it back to your handwriting. Enjoy the liberty of composing your own mail, and as much as possible, try to leave out details that may let them trace it back to your identity. Once the letter is sent, just wait for the results from afar. Don’t be paranoid; no one will ever know it’s you!

This is one of the easiest ways you can tell someone they are being cheated on. On Instagram, you can easily make new accounts without anyone knowing that it’s yours. You can fully utilize this and ensure that your phone does not track your location for added measure. It’s kind of creepy to see an anonymous account come up to them and say that they are being cheated on. So make sure that you can express all you need to express yourself believably. You may also attach photos of shreds of evidence to further prove your point. Once they got the message, you can delete your account like it never existed and leave it up to them to decide if they are going to take that tip or not.

However, it would still be best if you have alternative contact details when creating a new account on any social media platform.

This is an unusual yet creative way to let someone know that they are being cheated on. Try using a spoof call app to call someone up anonymously. What a spoof call app does is basically collect your information and carefully hides it all under an anonymous caller ID. No need for burner phones anymore because this will act like an entirely different phone number for you. Trust us, it’s completely untraceable by any average Joe so you know, you’ll be safe. It even has a voice-changer feature to help you disguise your voice. Talk about safety and anonymity in the 21st century! Cool, huh?

4. Set them up with an anonymous tip.

This is one of the most old-fashioned ways to do it but probably the one that will require your most effort. You can leave a package in their mail with secret messages involved or other things that you see in spy movies. This is perfect when you have a lot of time to spend doing this.

If you want it a decade backward, you can always do so by sending an anonymous text message. Getting burner services or a new number may be necessary just for this step. When doing this, make sure that their partner has no access to their phone, or else your effort will just go to waste!

Now, these are all you need to know about anonymously telling someone that they are being cheated on. We’re excited for that cheater to get caught! Good luck, and don’t forget to have fun along the way!

Read Next: Ownage Pranks Shows You How To Make A Spoof Call