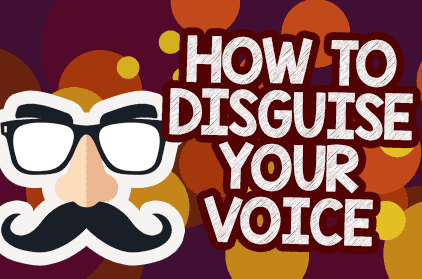 Expert Pranking Guide: How To Disguise Your Voice Over the Phone

Picture this - you prepared the perfect prank call. Compelling character? Check! Hilarious prank script? Check! Masked number? Check! You feel like you are ready to get back at that one friend and family member. You dial their phone number, all excited. You say the first line, then they hit you with "[Name], is that you?"

Hours spent practicing go right down the drain. It's embarrassing! No prankster worth their salt will ever make that mistake.

Just because your phone number is anonymous - doesn't mean you're in the clear. Like we covered in How to Prank Call - you have to sell the character! Disguise your voice over the phone and make one of the best prank calls ever!

How To Disguise Your Voice Over The Phone

There are several ways you can change your voice over the phone. Each one comes with its own conveniences and challenges. It is up to you as a prankster to find the perfect way to change your voice and become a different person. Here are the 4 common methods of disguising your voice:

Voice acting is all about portraying a character and adapting speaking habits that will bring that character forward. Just use your most convincing fake voice to make a fool of your victim.  Once you change the way you speak, the effect is instantaneous!

By changing the pitch of your voice, you can sound older or younger or more feminine or masculine. It creates a completely different feel. To successfully pull this off, you need to learn how to control your vocal pitches.

A high-pitched voice can feel young and spry. By putting on a high, maybe even squeaky voice, you can pose as a kid or teenager. Using your head voice to speak in a higher pitch is the way to go. On the other hand, a low voice can show stability and maybe even intimidation. Elizabeth Holmes (yes, from the Theranos scandal) lowered her voice to command respect. If you're unsure how to speak in a deeper pitch, there are so many different YouTube tutorials on how to speak in a guy's voice. Some of them are really helpful, while others seem a little bit ridiculous. But at the end of the day, it's all about finding what works for you and makes you feel comfortable. So if you're considering trying out a new voice, go ahead and check out some of these tutorials! You never know, you may end up liking it!

Another way voice actors create new characters is by changing their accents. Changing your accent alone can already allow you to mimic a distinct voice. If you can do it and do well, use it in your pranking arsenal. All of Ownage Pranks' soundboard characters come from one person. It's possible you have that talent as well!

Now we also have to consider those that aren't gifted with the same ability. You don't have to go for the same high-stakes accents. Instead, you can opt for speaking rules. Once you have enough rules in place, you can use them to create your own "accent."

With these 3 prompts, you are effectively disguising your own speaking habits. To learn more about it, check out: The Art of Pranking: Voice Acting Tips.

The main issue with voice acting is being able to stay in character. Even actors and actresses on the big screen forget their character's rules, slip into old habits and start speaking their real voices. Voice acting is effective, but it takes a ton of practice. If you are looking for a more immediate way to change your voice in real-time, then voice changer apps can be the solution.

With so many smart phone apps or iPhones and Androids  to choose from, you're sure to find a voice modifier that will suit your needs and preferences. But even though they are readily available, you need to consider how they change your voice.

For some voice changer apps, you need to record your voice first. The app edits it after it is recorded. Think about the Talking Tom voice changing app. You don't hear the changes happening live. You have to wait until the effects are added to your voice.

While it is a funny voice, it takes too long to use in a prank call. You can't just be in a phone call and turn your back to record your reply with the voice changing app. It just wouldn't work.

You have to find voice-changing apps that can edit during live voice calls. Ownage Pranks' prank call app has a free voice changer included. You can also add sound effects to make the call more interesting. Besides switching from male to female voices and vice versa, you can add background audio. If you want the best voice changer, give our prank call app a try!

If the app's effects are not working out for you - you might need a mechanical intervention! You can purchase a modulator for changing your voice. Its features are limited (voice-only) but easy to use. It can make your voice higher or lower, so you can go from helium-balloon-squeaky to Darth-Vader-deep.

While you have to pay for voice changers, you don't have to worry about pressing the wrong button or losing the audio. You can speak like you normally would over the phone call, creating a seamless disguise.

A voice modulator also allows you more freedom with how you want to make prank calls. If you want to send pre-recorded pranks over the internet, record them on your laptop. You don't need to download a separate voice changing app to make it happen.

Now, what if you don't want to speak at all? It may sound weird, but there are some people who love prank calls but can't bring themselves to do it because of phone call anxiety. The quickest way to solve that is to make calls with character soundboards.

These free soundboards come with signature phrases and filler answers. Play with different combinations and create a hilarious prank call! You can recycle lines over and over, and it will still sound like a real conversation.

You can check out our website for our free character soundboards. If you want to become someone else for a prank call - all you have to do is select the right person for the job. You can also have multiple characters play a role in your prank call. For more ideas on how to use our soundboards, just check out our Youtube videos.

Why Should You Disguise Your Voice In Prank Calls?

So why should you change your voice in the first place? While you can make prank calls with your original voice, there are times when it is called for. Here are the 3 main reasons why pranksters should disguise their voices:

Read Next: The Art of Pranking: Voice Acting Tips!