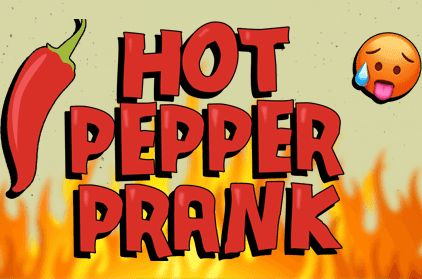 There is no doubt that hot peppers could be great additions to spice up your favorite meals. You can turn ordinary, boring dishes with a dash of your favorite hot pepper sauce. Contrary to popular belief, hot peppers aren’t just made just so you can give your recipe a kick. For us here at Ownage Pranks, everything is here in this world for one sole reason: to be used as a pranking device! With that, we officially welcome you to our weekly Pranking 101! In this ultimate guide, we’ll show you how you can have fun with a good old hot pepper prank. But first, how did hot peppers become a thing, especially in the culinary scene?

Hot peppers have been around for a while. Hot pepper sauce, the most popular reiteration of the famous vegetable - or fruit (which is a whole other story) - has been used by the primitive people not just to add more flavor to the food they eat, but also to a whole array of other unusual purposes like using it to soothe muscle pain or as a weapon to attack their enemies. And no, we’re not making that up!

Fast forward to the AD, hot peppers became globalized - thanks to our Spanish pals, people from Asia, Africa, Europe, and the Caribbean, and later on, Mexico (thus the name of the worldwide-famous hot sauce, Tabasco), were able to become acquainted with this amazing thing. But, enough of the hot pepper history, let’s get to the real HOT stuff, our favorite hot pepper prank ideas to ever exist in history!

We all know that hot peppers aren’t everybody’s favorite because of the fire and burning sensation it can bring to other people. Some may like it - others even LOVE it to the point that they put it on every food they eat - but many people aren’t used to its spiciness because they get weird reactions from it. With that, it is very important that we take note of these considerations before we go on pranking other people:

We’re going to say it again: hot peppers aren’t everybody’s favorite; that’s why you need to take note of how your prank victim is going to react when you pull off a hot pepper prank on them! One thing you can also consider is to do the prank on someone who shares the same age as you and not to someone who’s already sick and tired or pranks like this.

Did you know that there is actually a thing called aromaphobia? Aromaphobia is the fear of spice or spicy foods. This is one of the many reasons why you should do background research about your prank victim first. They might not just hate hot peppers, but they might actually be scared of it! We don’t want you to be tagged as a jerky prankster.

There are a LOT of types of peppers - bell, poblano, anaheim, serrano, cayenne, jalapeño - and we can still go on and on. These types of peppers are classified according to their use and Scoville measurement, the unit used to determine how much spice a specific pepper can bring. If you’re going to do a fun prank, you would want to stay away from very spicy (and dangerous) kinds like the Ghost Pepper, as this can go for more than 1 million Scoville units! If 1 million Scoville doesn’t sound daunting enough for you, think of jalapeño, but make it 100 times hotter. Eeck!

If there isn’t a hot pepper around

If you really are in the pranking mood and there are no hot peppers around to be played with, you can always rely on a trusted prank call! Today must be your lucky day: Ownage Pranks has its own prank calling app, available to download for FREE, whether you’re on iOS or Android. Our prank call app works by using very clever AI speech recognition technology to make it seem like your prank call victim is talking to a live person and not a recorded one. We won’t spoil you the details on how amazing this app is so go ahead and download it right now! And yes, you’re welcome! wink wink

Alright, sit tight and grab your bowl of popcorn because here are the best hot pepper prank videos we’ve compiled from the internet for your viewing pleasure (and hot pepper prank inspiration):

For our first hot pepper prank idea, we are going to start small. If you have a roommate, sibling, or SO that needs a little extra spice to get through their day (we hope), you might want to give this prank idea a try. Here’s what you have to do:

If you have an upcoming family gathering or a game night with your friends, this will be the perfect hot pepper prank idea you can do to kick start the event! With this Strawberry or Pepper prank, they will surely be in for a fiery surprise. All you have to do is buy strawberries and strawberry-looking peppers and wrap it in melted chocolate. Once it cools down, put all of them together in a large bowl and roam around the place asking people if they want a taste of the dessert you just prepared. Be sure to film their reactions so you have a funny clip of someone who’ll unluckily pick the hot pepper!

Here’s what u/dean84921 did to his unsuspecting friend! We feel bad for Matt, but you have to admit that it was a good prank!

“I can hardly wait for lunch, and not two minutes after I sit down in the cafeteria I see Matt walking up to me, no doubt wanting my jerky. I'm sure he'll notice the wet sauce, so I tell him that it's a new kind of spicy teriyaki so it's marinated in some sauce, and I ask if he can handle spicy food. Now if he had said he couldn't take spice, I wouldn't have given him any, but he assured me it was no problem. So I hand him a few pieces, and he wolfs them down and heads back to his own table.

Not ten seconds later I see this kid sprinting across the cafeteria with a  look of pure panic in his eyes. He drinks from the water fountain for what must have been a few minutes before standing. Red faced and teary-eyed, he looks at me, smiles, and mouths, "you're an asshole!". And so I was.

Took him a few days to get over it but he eventually thought it was funny.”

And that was it for Ownage Pranks’ Pranking 101: Hot Pepper Prank! We really hope that we were able to spice your day up a little. Stay tuned for the next installment of our Pranking 101 series because we have a lot prepared for you.